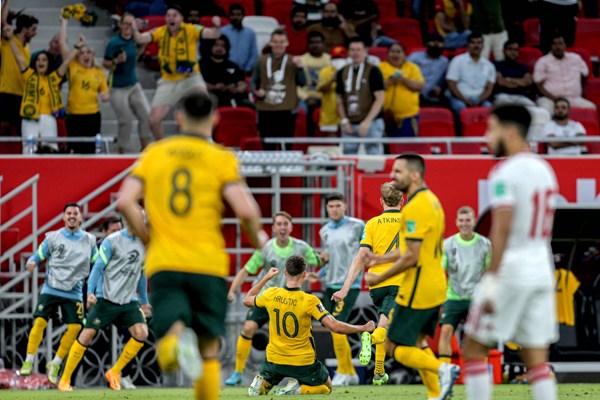 Jackson Irvine hopes Australia will reward their early risers to watch the play-off against Peru and inspire their new generation of players with FIFA World Cup victory and qualification.
The play-off in Qatar starts next Monday at 9 p.m. Doha time, meaning fans in Australia will have to get up in the early hours of Tuesday morning to watch the match on television.
“It seems like a long time ago, but at another time I got up early in the morning and watched the games,” Irvine said in Doha. Hopefully the younger generation will wake up early and some Australian players in the future will be able to tell their own story of watching us qualify for the World Cup and experiencing it for themselves.
Australia and Irvine are no strangers to play-off matches, as the team reached the last 2018 World Cup in Russia, after play-offs against Syria and Honduras.
Irvin took part in the first game to end in a goalless draw against Honduras, as he came on as a substitute without taking part in the decisive 3-1 win in the return in Sydney, where Australia qualified for the fourth time in a row. World Cup. for its ecstatic fans, who numbered 77,000 spectators in the stadium.
“A lot of the players who are here today were part of that, so we have to qualify for the players who weren’t with us,” said Ervin, who plays in Germany. Each stage of past experience can help us grow and contribute to what we will do next week.
Next Monday there will be only a few dozen Australian fans and a few Australian expatriates at Ahmed Bin Ali Stadium, but the Australian national team is used to playing for empty seats in Doha.
Australia defeated the Emirates 2-1 in the Asian play-off at the same stadium on Tuesday, and Jordan in a friendly match with the same result last week at a different stadium in Doha.
It also won two “home” matches in the World Cup qualifiers in the Qatari capital last year, when Australia effectively closed its borders due to Covid-19.
Irvine, who scored the first goal in the victory over the Emirates, added: “Every experience is unique. It’s a very different environment, but we hope to get the same result against Peru.