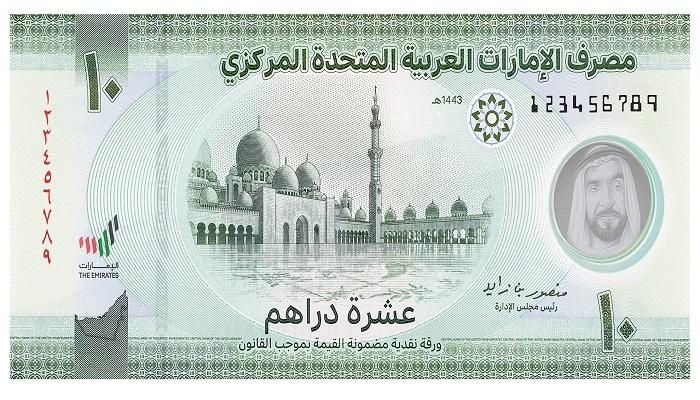 The Central Bank of the United Arab Emirates has announced the launch of two new banknotes in denominations of five and ten dirhams.

The bank stated that the two new banknotes are made of “polymer” and have technical specifications and advanced security features.

This new offer fits in the context of the third issuance of the national currency and is based on the will of the Central Bank to keep pace with the expanded renaissance and ambitious development vision of the state over the next fifty years, especially on financial and economic area, following the success of the first offering of the 50 dirham (polymer) banknote, according to what The Emirates News Agency (WAM) reported.

This also comes as confirmation of the Central Bank’s acceptance of the sustainability approach and its efforts to develop environmental standards in the financial sector and promote sustainable growth by using an environmentally friendly “polymer” material that can be recycled, such as this one. banknotes have a higher degree of durability and a longer shelf life than banknotes Made of cotton at a rate of twice or more.

The Central Bank continued the approach of the third edition, combining modern technologies with the beauty of design. The aesthetics of the design in these two documents is represented by the presence of a transparent window decorated with the image of the founder, Sheikh Zayed bin Sultan Al Nahyan, and the logo of the visual media identity of the UAE, in addition to the presence of advanced geometric shapes, drawings and inscriptions designed with intaglio techniques and fluorescent inks.

Technical characteristics of the five dirhams

In the design of the new five dirham banknote, the Central Bank wanted to maintain the technical characteristics of the color of the paper banknote currently in circulation of the same denomination, in order to facilitate identification by the public.

The design also includes images of a number of national and civilization symbols in the UAE. In the center of the front of this banknote, the image of “Ajman Fort” appears as an archaeological and historical monument that testifies to the cultural and historical legacy of the fathers and grandfathers. An image of “Dayya Castle” in the Emirate of Ras Al Khaimah, a distinctive cultural and heritage destination in the country, appears in the center of the reverse side of the banknote.

Technical characteristics of the ten dirhams

The new 10 dirham banknote kept its green color, similar to the color of the banknote currently in circulation. In the center of the front appears the image of the Sheikh Zayed Grand Mosque, a prominent religious, national and cultural monument in the country, and enjoys a prominent position in the world. In the center of the reverse side of the banknote is an image of “Khorfakkan Amphitheater” as one of the prominent cultural monuments in the Emirate of Sharjah.

The Central Bank has made an effort to adopt the latest international standards and technologies in the two new banknotes, as well as to use technical specifications and high-quality visible and latent security features in the banknote industry to increase the confidence of traders in the national currency, as well as to prevent counterfeiting. The two notes also have a prominent feature in Braille to help blind dealers identify the note’s value.

The two existing banknotes of the same denomination remain legally in circulation alongside the new (polymer) banknotes as value-guaranteed notes.

In this regard, Khalid Muhammad Balama, governor of the Central Bank of the Emirates, said on this occasion: “The issuance of the new banknotes of the five and ten denominations, and before that the fifty dirhams, is a source of pride and pride because of the symbols and connotations they carry that reflect the history of the United Arab Emirates and its immortal legacy, in the same time it reflects the future vision of development and prosperity in the country.

He added: “Thanks to the wise guidance and firm support of our wise leadership, we look to the future with confidence and optimism to achieve greater results and achieve global leadership. We at the Central Bank reaffirm our commitment to the constant quest for the UAE dirham to become an international currency used on a global scale.”