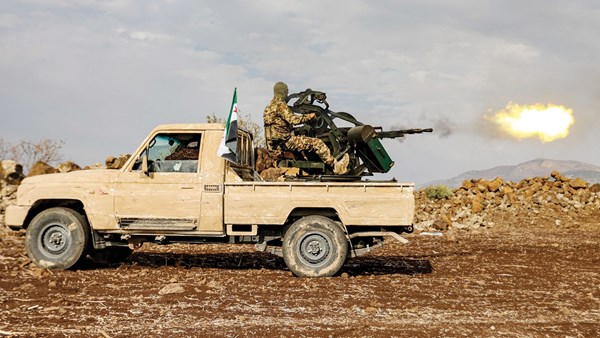 International calls for calm and restraint escalated after Turkish raids targeting sites of Kurdish militants in Syria, in response to the bloody attack in Istanbul, for which Ankara accused the PKK and Kurdish People’s Protection Units of responsibility.
Yesterday, Turkish President Recep Tayyip Erdogan said his country would attack Kurdish militants in northern Syria with “tanks and soldiers as soon as possible”, following the escalation of attacks along the Syrian border between Turkish forces and armed Kurdish factions.
Ankara accused the Syrian Kurdish YPG militia of killing two people in mortar attacks launched from northern Syria on Monday, following Turkish air operations over the weekend and a bombing in Istanbul a week ago.
Erdogan said in a speech, “We attacked terrorists a few days ago with our planes, artillery and guns,” adding, “We will uproot them all as soon as possible with the help of our tanks and soldiers.”
He added: “Our response to the cowardly attack that killed 6 innocent people in Istanbul came by destroying terrorist targets in northern Iraq and Syria.”
He continued: “We know the identity and location of the terrorists and their details, and we know very well who sponsors, arms and encourages the terrorists,” pointing out that “the end of the road has come for those who think they can distract Turkey with letter games, change the name of the terrorist organization and make their soldiers look like them.”
And he continued: “No one can stop us or stop us from drawing the security line to where it should be in the places where attacks on our borders and our citizens continue.”
For his part, Turkish Defense Minister Hulusi Akar said yesterday that his country’s airstrikes in northeastern Syria and northern Iraq are “the largest, most extensive and most effective” against militants there. He added, in statements from the official Anadolu Agency, that “36,854 militants have been neutralized in Turkey, northern Iraq and Syria since mid-2015”, noting that among them 3,585 militants have been eliminated since the beginning of this year. He pointed out that “his country calls on all countries to stop supporting the PKK and the Kurdish People’s Protection Units.”
Earlier yesterday, the Kremlin said it respects Turkey’s “legitimate security concerns” regarding Syria, but stressed that all sides should avoid any steps that could lead to a worsening of the situation.
“We hope to convince our Turkish colleagues to refrain from excessive force on Syrian territory, in order to prevent an escalation of tensions,” Russian President Vladimir Putin’s special envoy to Syria, Alexander Lavrentiev, told reporters.
Yesterday, a spokesman for the US State Department said that the United States opposes any military action that destabilizes the situation in Syria, adding that Washington has informed Ankara of its serious concern about the impact of such an attack on the target to to fight ISIS. French Foreign Minister Catherine Colonna had expressed her country’s “concern” over Turkey’s airstrikes on Kurdish sites in Syria and Iraq on Saturday night and Sunday, calling on Ankara to “restrain”.
In turn, the German government called on Turkey to respond “symmetrically” to the attacks aimed at it.