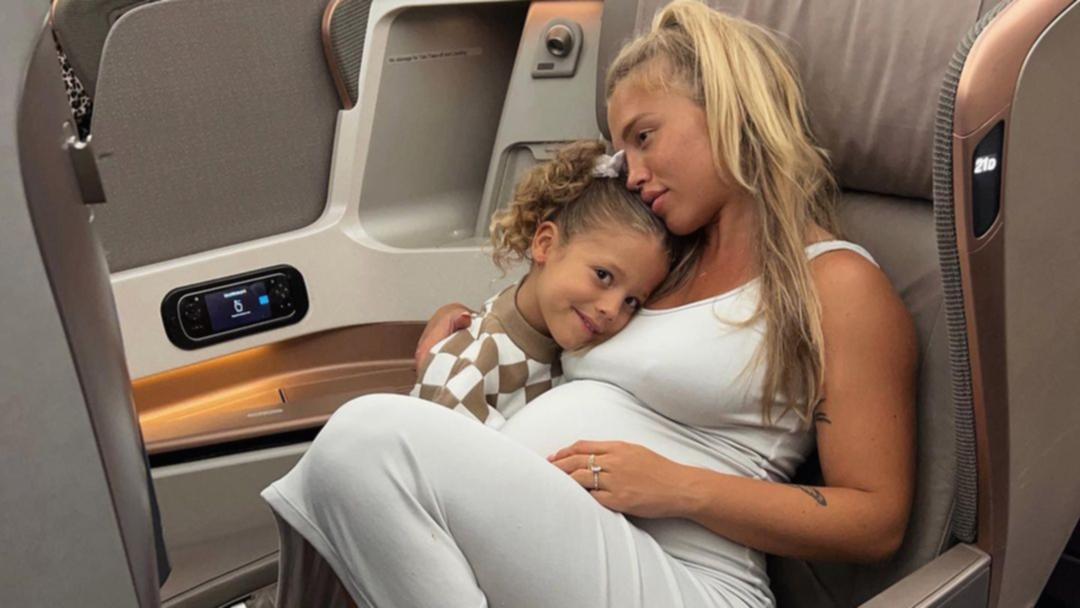 Influencer Tammy Hembrow hit back after she was reprimanded by her followers for going on a luxurious overseas vacation in the final weeks of her pregnancy.

The fitness trainer shows off enviable snaps from her vacation in the Maldives, where she goes on a getaway with fiancé Matt Poole and kids Wolf and Saskia.

The photos show the 27-year-old lazing on a swing on the beach, swaying her belly on a beach hut on an island and taking in a glowing sunset.

“Not much time left with this bump so you better believe I’m showing it off every chance I get,” she wrote to her followers.

But she was criticized by some of her 14 million fans for venturing so far from her Gold Coast home while she was 32 weeks pregnant.

A photo of Hembrow reclining in a business class seat on a Singapore Airlines flight earlier this week sparked the reaction.

“Wow Ur game to fly so pregnant,” wrote one follower.

“I would in no way risk having a baby abroad or on a plane.”

“I think because of pregnancy you don’t go that far to one place,” added another.

But Hembrow hit back at those who doubted her escape, insisting she had obtained permission from medical professionals to travel.

“I’m only 32 weeks haha, I don’t plan on getting this baby on the plane,” she wrote.

Hembrow has documented many milestones in her pregnancy to her Instagram followers and even took to YouTube to share images of her ultrasound, which confirmed that her unborn daughter has 12 fingers.

“The baby has what I had when I was born, which was 12 fingers,” Hembrow said in the footage.

“Six fingers on each hand.”

Hembrow denied a rumor she was expecting twins after she teased a surprise during her ultrasound.

She shared that having extra fingers is a trait that runs in her family, with her sisters, brother and mother also being born with extra fingers.

“Actually like the name Stormi (currently),” she wrote on TikTok.