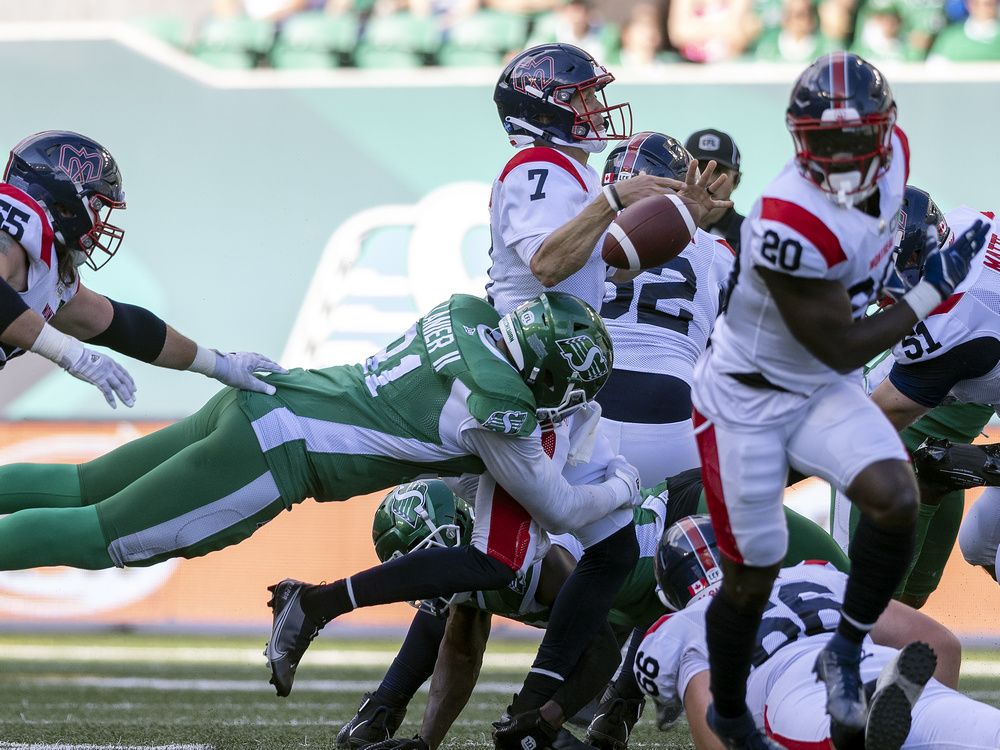 REGINA – The Alouettes are entering their first week of leave of the season with a 1-3 record – their only win at home, against a Saskatchewan team that played its second road game in five days and arrived in Montreal after practicing just once.

As legendary former NFL coach Bill Parcells once said, “You are what your record says you are.”

For the Als, that means they aren’t a particularly good team at the moment. The good news is that the East Division is bad and Montreal is the only game in first place. But head coach Khari Jones has a lot of things to think about between now and the team’s next game, July 14, against Edmonton.

“We’re figuring out who we are and it’s been a long season,” quarterback Trevor Harris said after he and his teammates were beaten 41-20 by the Roughriders at Mosaic Stadium on Saturday night. “A lot of people will write articles and write this and that about our team when there are four games in an 18-game season. But this story has yet to be written.

“I am convinced that we have what it takes. I think in September and October we will be happy with what this team looks like.”

Harris has been Als’s starting quarterback for two games now, and Montreal has scored two offensive touchdowns in that span, relying instead on kicker David Côté’s foot and the legs of exciting return specialist Chandler Worthy. He returned an 84-yard kick-off for a touchdown on Saturday, becoming the first player in team history to kick off for scores in consecutive games.

While Harris completed 18 of 26 passes for 198 yards – decent numbers – he turned the ball three times, including twice on interceptions. One, in the fourth quarter, was sent back 90 yards for a touchdown by Nick Marshall when the Als trailed 13.

Harris was replaced by Vernon Adams Jr. with just over three minutes left in the fourth quarter. It was Adams who was replaced by Harris early in the second quarter of a game in Toronto on June 16.

“We were in a position to win that game at half-time,” said Harris. “We came out and none of the three phases (succeeded) in the third quarter. We placed behind the eight-ball, but we had ourselves in position to make it a one-tier game. We were driving to make it a one score game and I handed it over (to Marshall).”

While Als’s lead was small at halftime – 13-11 – it was nevertheless the second time in four games that Montreal has squandered a second-half advantage. The Als failed to hold onto a 10-point lead in Calgary to open the season, and if that happens, there’s no one else to blame but Jones and his coaching staff.

Montreal was defeated by the Riders 21-0 in the third quarter, with the offense limited to just six games. Defensive tackle Michael Wakefield, who had plenty of playing time due to the absence of Almondo Sewell, was sent off in the third quarter after his second misconduct penalty. He had an ongoing feud with offensive tackle Na’Ty Rodgers. At one point, Wakefield threw his helmet in disgust and hit Rodgers.

Football is an emotional game, and some Montreal players may be excused for losing patience with referee Al Bradbury and his team. The Als were penalized 11 times for 105 yards. Incredibly, that was less than Saskatchewan’s 16 offenses for 155 yards. Nevertheless, Wakefield became the second player of Als to be sent off this season. A lack of discipline must again be attributed to the head coach.

It looked like the Riders’ offensive linemen got away with holding on, which likely contributed to their 163 yards rush, 103 only by Jamal Morrow, who had 16 carries.

Jones spent an inordinate amount of time in the locker room before finally coming out to meet the media, and his ashen face spoke volumes.

“I’m just disappointed with how we reacted to things that happened on the pitch,” he said. “We knew it was going to be a game like that. I warned the boys and let them know what they were dealing with. We didn’t react in the right way. We left (the defense) on the pitch for far too long ​​and they took advantage of that, you win and lose games, but you don’t necessarily want to lose like that.

“It’s terrible and it has to stop,” Jones said of his players’ discipline problems. “We’ll fine the boys. We’ll do what we have to do. I spoke to Wakefield. He lost his head. He just felt like the game was dirty against him and he took revenge. You can’t retaliate. You can’t react to it. Guys need to be able to shut up. If they can’t, things like this will keep happening and we’ll get in trouble.”

The Montreal quarterbacks were fired six times; the loss of injured center Sean Jamieson clear. Without Sewell, whose wife had given birth, and after Wakefield was removed, the only remaining replacement was Canadian Vincent Desjardins, who made his season debut.

“The offensive line wasn’t as good as it was in the past,” Jones admitted. “They had some problems. I think that’s where the game is lost – on both lines. We had to get better.”