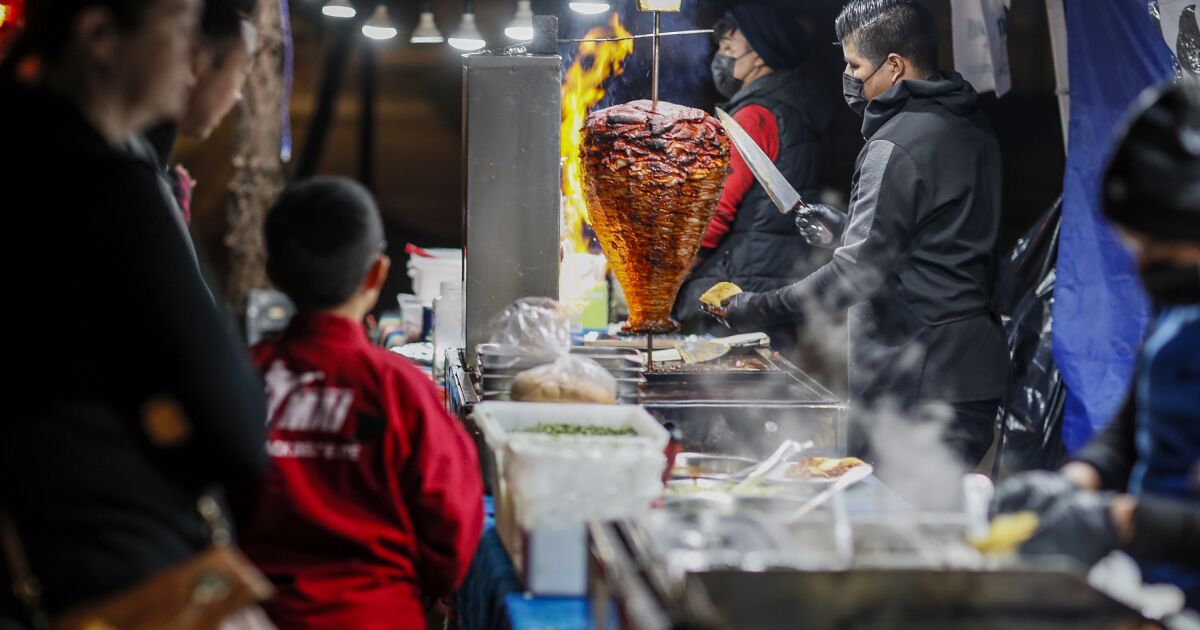 As Anaheim code enforcement trucks with grills, portable generators and propane tanks pulled up to the city’s warehouse, scouts dispatched by street vendors stood on the lookout.

Sometimes peering through binoculars, the scouts noted when equipment seized from unauthorized taco stands was cordoned off so they could avoid being targeted themselves, according to city documents obtained by The Times.

But by June, they had canceled weekday patrols. The sellers were often one step ahead. When caught, some did not give their real names or pay the fines. The cost of losing their equipment was a price they were willing to pay to keep working.

The Anaheim documents provide a behind-the-scenes look at a cat-and-mouse game going on across the state, as local officials file complaints from residents and brick-and-mortar businesses, while taco stands find plenty of willing customers. A 2018 state law that largely decriminalized street vending has left Anaheim and other cities with limited enforcement capabilities.

From January to October, Anaheim’s enforcement program resulted in more than 100 citations of illegal street vending and 85 equipment seizures, the city said. Recently, code enforcers have extended their hours, hoping to open the grandstands later in the evening.

But that’s not much of a difference in a city where 100 complaints are filed in an average month – from customers who say they’ve fallen ill to business owners who complain about unfair competition.

Some shoppers lining up for cheap street food say city officials have better things to do than target immigrant entrepreneurs.

During a break from his job at a circuit board company, Abraham Martinez ate $2.50 al pastor tacos and a $9 quesadilla de chorizo ​​at Tacos El Chivo, a stand that is a regular in Anaheim Hills and has been repeatedly targeted by the city.

“We’re not cracking down on a lot of things that should be fought,” said Martinez, 29, an Anaheim resident. “Most of these people are good, hard-working people. They don’t bother anyone.”

No enforcers showed up that night. But over the summer, county health officials seized Tacos El Chivo’s grill and threw away the food, according to the report obtained by The Times. That was one of several raids on Tacos El Chivo, including three in one week, co-owner Mario Alvarez said.

Alvarez, 32, worked at another taco stand, Angel’s Tijuana Tacos, learning the trade and saving money to start his own business with his brothers, all Guatemalan immigrants who were construction workers and tailors before the pandemic.

“All of our equipment was confiscated and each time it cost us about $8,000, including all the meat that was thrown away.” He estimates the company lost a total of $90,000 in equipment and food.

“The first time we were raided, it hurt us a lot,” he said. “But since we previously worked for a boss who had the same issues, we knew what to expect.”

Like Tacos El Chivo, which sits in front of a Kaiser medical clinic, many street food stalls in Anaheim occupy territory with no Mexican restaurants nearby.

Yet some owners of traditional taquerías have flooded the city with angry calls about vendors along the main streets who, they say, operate too close to their businesses and don’t pay rent or taxes.

Some residents who file anonymous complaints with the city are raising a familiar rallying cry in Orange County – that Anaheim, which is 53% Latino, is about to turn into Compton, East Los Angeles or even Tijuana.

Taquería San Martin, a hole-in-the-wall nestled in the corner of a strip mall, reduced late-night hours due to competition from nearby taco stands, owner Serapia Silverio Alonso said.

In August, Alonso met with a councilman and the city manager, but nothing came of it, he said. He believes many of the stands are not the work of small business owners, but of a Los Angeles taco queen who operates dozens of stands like a “mafia.”

“I’ve worked hard for 23 years to build my business,” said Alonso. “It’s not fair that other people come from far away to make easy money.”

On a recent Friday night, after Taquería San Martin closed its doors at 10 p.m., Angel’s Tijuana Tacos was busy a mile away. Already shaved a taquero off the spit with a large kitchen knife, topped with pineapple slices. A taco at the physical taqueria costs $2, while Angel’s offerings cost 50 cents more.

Aside from tacos, both serve burritos and quesadillas.

“This plate is for here and this other one is for takeout,” one customer said as he put down the tacos before taking his change.

Angel’s Tijuana Tacos has stands in 15 cities throughout Southern California, from North Hollywood to Santa Ana. The Instagram profile has 345,000 followers.

In Anaheim, Angel’s equipment has been seized several times, but the booth continues to operate night after night.

In April, Disneyland urged the city to tighten up on street food vendors.

Although the Disneyland Resort is a no-vending zone, fruteros and water vendors have set up entrances outside.

City officials say underground companies that can deploy lookouts at city depots and easily replace expensive equipment are likely part of larger operations that may be exploiting immigrant cooks in human trafficking operations.

“People who buy food from illegal street vendors should know that they may not be buying from the immigrant entrepreneurs they believe they are,” said Mike Lyster, a spokesman for the City of Anaheim, “and could instead be unwittingly contributing to human trafficking and exploitation. .”

The claim is based on anecdotal evidence and the Orange County Human Trafficking Task Force has not pursued any such cases, the Anaheim Police Department said.

Stephen Lee, a UC Irvine law professor who focuses on immigration and has written about street food justice, said immigrants in informal economies are vulnerable to exploitation, but street vending is probably no worse than other industries.

“There will be economic exploitation, but that goes for any kind of industry,” Lee said. “I haven’t seen anything to suggest that street vendors are particularly vulnerable or conspicuous in that regard.”

A new state law, SB 972, which takes effect next year, will make it easier for street food vendors to obtain a health permit. Fruit, hot dog, and corn carts will benefit, but taqueros must cook meat off-site in a licensed commissioner’s kitchen.

“The law hasn’t necessarily changed that much when it comes to preparing raw meat on the spot,” said Katie McKeon, a staff attorney at Public Counsel who co-sponsored the bill. “We weren’t able to get the various health departments to budge or be creative about how we safely handle raw meat on the curb.”

After dismantling its weekday patrols, Anaheim doubled its hours spent on enforcement efforts in November and is seeking to refine its strategies.

Alvarez of Tacos El Chivo said it takes capital to start a business from the top down – and he aspires to do just that.

“We’re trying to do business legally and maybe one day we’ll have a taco truck,” he said. “That’s not an option for us right now; otherwise we would have started like this.”