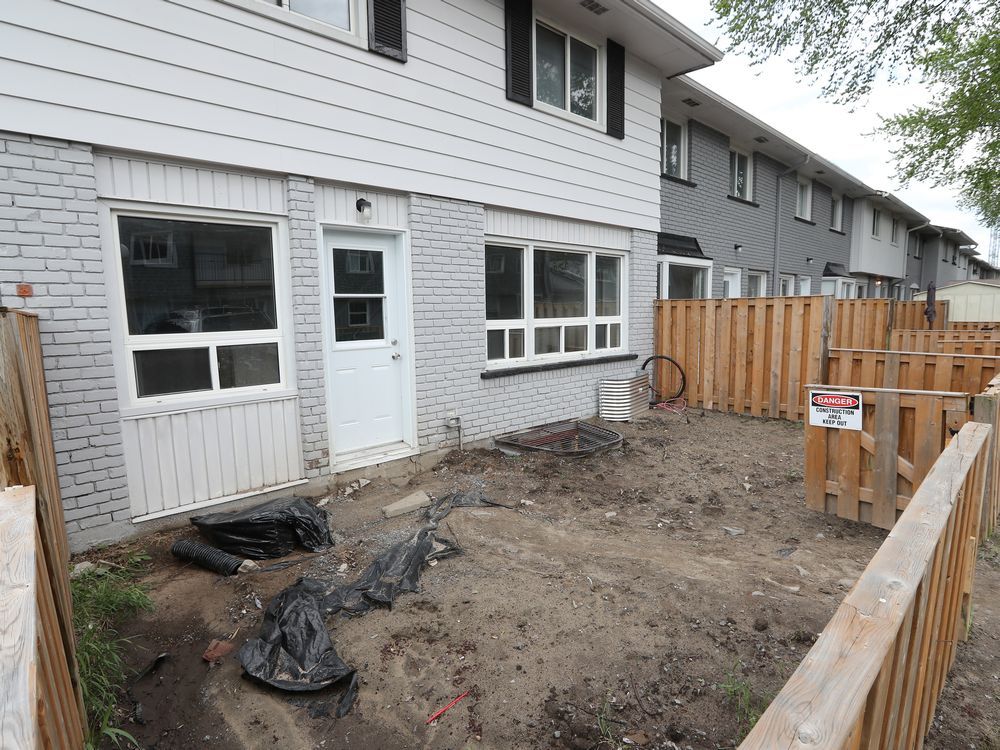 Though some expressed their reluctance, members of the transportation committee eventually voted to approve spending tens of millions more than planned for a rework of the future Barrhaven LRT route that would avoid the need to expropriate homes, but also would benefit a landlord who currently has many of the tenants in it.

City officials told the committee Monday it was the direction of the council, amid concerns over the planned destruction of 120 homes in the Manor Village and Cheryl Gardens communities, which sent them back to the drawing board on a Woodroffe Avenue section of the route approved by the council in 2020.

The plan they’ve come back with — to run an elevated guideway down the middle of Woodroffe Avenue between Knoxdale Road and Hunt Club Road, rather than along the west side — is on the city’s property and would prevent any residential relocation . It was not originally recommended because of “technical and operational drawbacks,” such as curves that would create noise and increase maintenance costs, transportation planning and environmental assessments, program manager Frank McKinney told the committee. They have found ways to allay most concerns and manage others “with careful design and appropriate construction procedures.”

That required a lot of work, creativity and collaboration between different departments, says city planning chief Stephen Willis in an interview. “We’ve managed to solve problems that we previously thought were unsolvable.”

A number of councilors on the committee shared their doubts about spending the extra $35 million to $50 million the new adjustment could cost to build, especially when it seems like it wouldn’t save many of the affordable homes people fear. were that they would lose in 2020.

The owners of Manor Village are in the midst of trying to buy out and, failing that, evict tenants to renovate and re-list their cheap townhouses, at prices such as $750 for a furnished room and $ 3,200 plus for a four bedroom house and yard.

“It’s frustrating,” Coun said. Diane Deans, “(if) we take on extra costs to make sure those affordable homes are protected and people can stay in their homes and then they get kicked out of their homes regardless… That’s a bit of a dilemma for us all.”

It’s an “intensely frustrating situation,” Willis acknowledged. But the evictions happening in Manor Village are not something the city can intervene and stop, he explained to the committee. The owners, Smart Living Properties and Forum Equity Partners, have not had to file a development application with the city to do their renovations, so the city can’t use the approval process to make concessions – and it is the Ontario government and provincial landlord and tenants’ council who are competent for the landlord-tenant relationship.

Turning to the prospect, put forward by some councilors, of building new affordable homes nearby to replace those that would be sacrificed for the planned LRT route, Area Councilor Keith Egli pointed out that eligibility and prioritization processes for subsidized housing mean that there is no guarantee that displaced residents would be able to live there.

count. Mathieu Fleury noted that realigning the LRT route would save the homes tenants had fought for years to keep, but it would also benefit the owner if he evicted many of them. He asked Peggy Rafter, a longtime Manor Village resident who addressed the committee Monday, for her opinion on the matter.

Rafter said she and fellow Manor Village residents who are now being evicted are fighting them. But she doesn’t want to see anyone else in the same predicament she is now, and the LRT reroute would save homes for tenants in the nearby Cheryl Gardens complex.

“They’ll be safe. We may lose, but they will be safe,” Rafter said.

Ursula Melinz, a lawyer for the owners of the Manor Village, told the committee that her clients planned to improve the property when they bought it in September 2020. renovations, from new HVAC to roofs, “to provide improvements, more livable units.”

In addition to destroying 100 homes over the next few years – Phase 3 LRT has not yet blocked a timeline or funding – staff also warned that the city’s original plan for the disputed 0.6-kilometer section of LRT’s route is looking increasingly expensive. .

The substantial rise in real estate prices that continues today was “unforeseen” when staff originally compounded project costs, McKinney said. There have also been previously unaccounted for “harmful affection” expenditures (damages that essentially go beyond just the pure value of the land) and they are now warning that the city is likely to face the owners of the property being expropriated. faced.

Given the potential costs now associated with the plan approved in 2020, McKinney said the additional $35 million to $50 million the new adjustment is expected to require “could be a wash at the end of the day. “

Unlike LRT Stages 1 and 2, the city is looking to federal and provincial governments to fund full Stage 3 expansions to Barrhaven and Kanata. Noting that higher levels of government will not fund the purchase of light rail real estate, Willis told the committee that “there is almost no ceiling on what the city could ultimately pay for these properties (in Manor Village and Cheryl Gardens) through this process. “

Egli urged his colleagues on the planning committee to vote for the route change, as everyone eventually did.

“While this is imperfect… what I am hearing as a councilor is that this is what the community wants,” Egli said.

It is also a proposal that pleases the owners of Manor Village. Melinz said they raised concerns about the chosen LRT alignment, which would take up to two-thirds of their 5.74-acre property, and thanked staff Monday for rethinking the route.

The proposal will go to council on June 8.