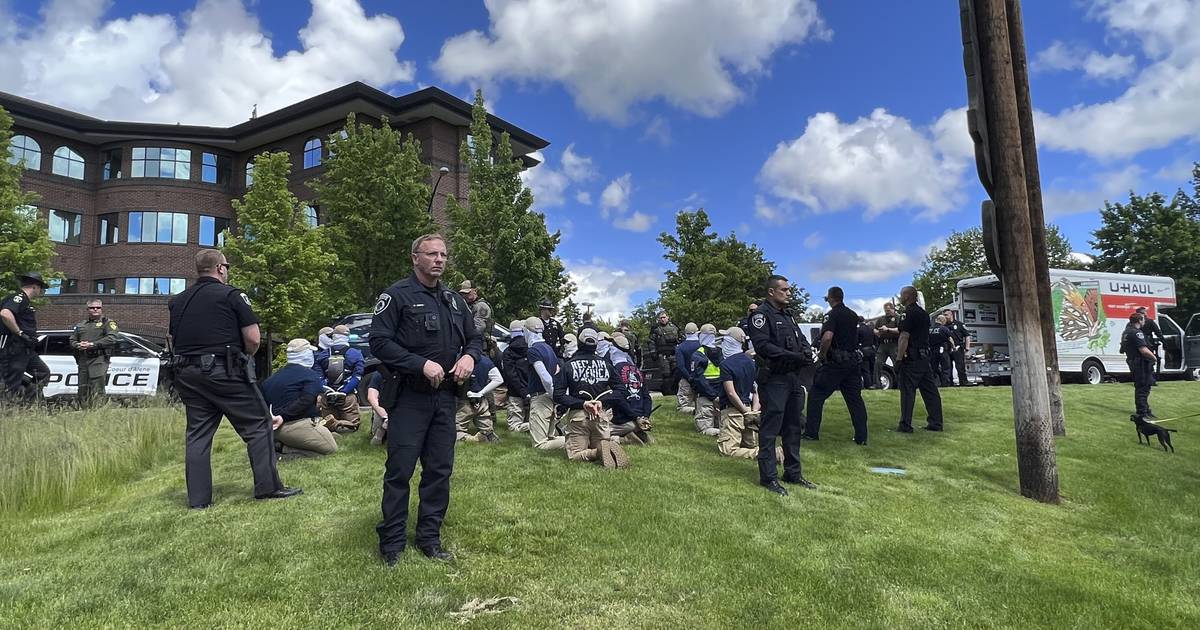 A Downstate Illinois man was one of 31 suspected white supremacists arrested over the weekend near an Idaho Pride event after being found in the back of a U-Haul truck with riot gear.

The men were in the truck wearing khakis, navy shirts and beige hats with white balaclavas covering their faces when the Coeur d’Alene police stopped the U-Haul and began to arrest them on the side of the road.

All 31 were charged with conspiracy to commit rioting, a felony, White said. The men were busy with the booking process on Saturday afternoon and will be arraigned Monday, he said.

Among those arrested was Garret Joseph Garland, 23, who was charged with criminal conspiracy, according to Kootenai County Jail officials.

He had a $300 bail as of Sunday, according to a county jail reservation document.

In April, the Hatewatch blog of the Southern Poverty Law Center linked Garland, of Freeburg, Illinois, to the white nationalist Patriot Front. It accused Garland of assisting the alleged leader, Mitchell Wagner, 24, and others in helping spray the group’s logo onto a mural of prominent African Americans at Washington University in St. Louis last December.

Wagner, of Florissant, Missouri, the only person charged in connection with the property damage incident, was along with Garland and one of the detainees in Idaho, according to prison records.

Patriot Front is described by the Southern Poverty Law Center as “a white nationalist hate group” formed after the deadly “Unite the Right” rally in Charlottesville, Virginia, in 2017.

“Patriot Front focuses on theatrical rhetoric and activism that could easily be disseminated as propaganda for its departments across the country,” the law firm said of the group.

The group’s manifesto calls for the formation of a white ethno-state in the United States, the law center said.

Based on collected evidence and documents, authorities found that the group planned to riot in various parts of the center, not just the park, White said.

Police found riot gear, a smoke grenade, shin guards and shields in the van, White said. The people in the truck wore arm patches and logos on their hats identifying them as Patriot Front members, he said.

Police learned about the U-Haul from a tipster, who reported that “it looked like a small army was loading into the vehicle” in a hotel parking lot, White said. Officials saw the truck shortly afterwards and stopped it, he said.

Videos of the arrest posted to social media show the men kneeling on the grass with their hands tied behind their backs.

“Reclaim America” ​​was written on the back of a shirt.

Police led the men one by one to the front of patrol cars, took off their masks, and then took them to a police van.

The detainees were from at least 11 states, including Washington, Oregon, Texas, Utah, Colorado, South Dakota, Illinois, Wyoming, Virginia and Arkansas, White said. Only one was from Idaho, he said.

The truck was stopped near where the North Idaho Pride Alliance was holding the Coeur d’Alene Pride in the Park event. Police had stepped up their presence in the area during the event.

“It appears that these people did not come here to participate in peaceful events,” Kootenai County Sheriff Bob Norris told a reporter for Coeur d’Alene Press.