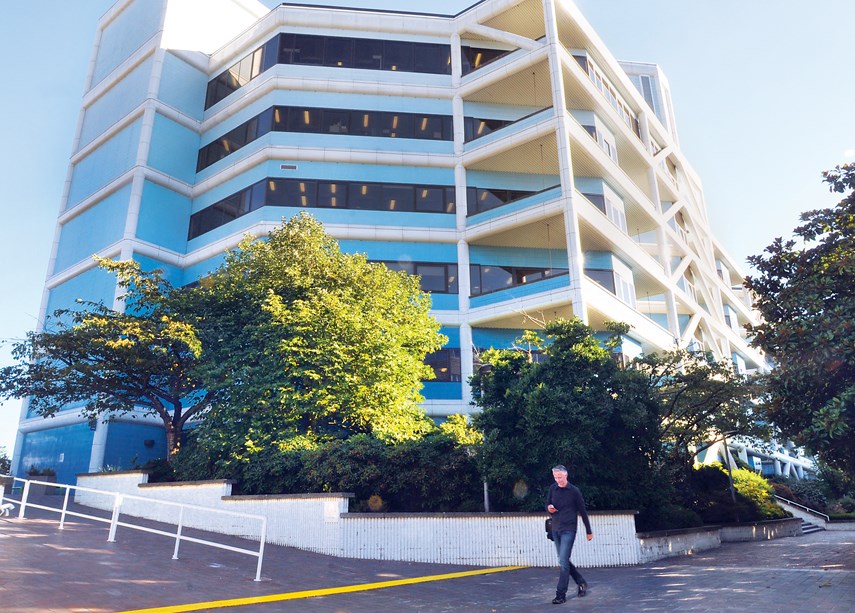 After occupying one of the most recognizable spots on North Vancouver’s waterfront for over 40 years, ICBC has announced plans to literally “leave the building” for the next three to five years.

The Insurance Corp. of British Columbia told its approximately 1,500 headquarters staff Thursday (Sept. 22) that the Crown Corporation plans to leave its 300,000-square-foot office sometime in the next three to five years. The move is not expected until 2025 at the earliest.

ICBC also doesn’t know where it will move its headquarters, said Adam Grossman, a spokesperson for the company. Occupying several floors of a commercial office tower in a location like Burnaby is a possibility, he said.

Regardless of where it ends, the company will downsize its physical digs and move to a model of smaller office hubs across the entire Lower Mainland, he said.

Grossman said the main reason for the decision is that, given that most employees work from home about half the time, “having a huge headquarters no longer makes sense.”

ICBC was already moving towards more flexible working arrangements when the pandemic accelerated the trend, he said.

Less than half of the office building occupied

Today, the large office space is usually only 20 to 40 percent occupied, he said.

When they come to the office, 70 percent of North Shore headquarters employees commute, he added.

Leaving the current office makes sense for most employees, he said — and it’s a move that has been repeated by much larger companies since COVID-19 brought about changes in workplace culture.

ICBC’s decision to relocate will be a significant change for a key area in North Vancouver’s Lower Lonsdale neighborhood.

Important question about what will happen in the future?

So far, “There are no firm plans or commitments about the future of this headquarters,” Grossman said. “It is clearly an excellent real estate space. That will take years.”

Five years ago, a leaked report prepared by ICBC on behalf of the previous Liberal government revealed that the Crown Corporation had developed a business case for the move and sale of the property at 151 West Esplanade, which has been in use since 1980.

Among the challenges identified in the report were “significant expenditure on maintenance and upgrades that will be required over the next 10 to 20 years. These expenditures are estimated at $184 million, with the bulk of the costs required during the first 10 years of this period,” according to the business case obtained by News at the time.

Spending that much money on a building that is rarely more than half occupied makes no sense, Grossman said.

Property valued at over $103 million

In 2016, when the business case for moving and selling was written, the property was valued at $79.8 million.

Today, ICBC ownership is valued at $103.8 million – almost all in land value.

Bowinn Ma, MLA for North Vancouver-Lonsdale, said when she first heard about the announcement this week, “I have to admit that my response was surprised and concerned.”

Ma said she was particularly concerned about what the workers’ exodus would mean for local businesses.

But given that most of those people often work from home anyway, Ma said she now sees the change as an “exciting opportunity” to revitalize an important area.

She added discussing both faster transit to the North Shore in the future and housing needs, the country could play an important role in those discussions.

“We’ve talked a lot about transit-oriented development,” she said, adding that the government recently passed legislation allowing the Ministry of Transport and Infrastructure to buy and hold land for purposes other than direct transportation.

“So building homes and building complete communities, there are many opportunities there.”

Ma personally added that she would like the land to remain public rather than sold to private development interests.

In a statement, North Vancouver City Mayor Linda Buchanan said she was surprised to hear about the plan to close the ICBC headquarters.

“While I am sad to see such a large public sector employer leave, this represents an important opportunity for our community,” she said. Buchanan said the city would like to discuss future plans with the province.