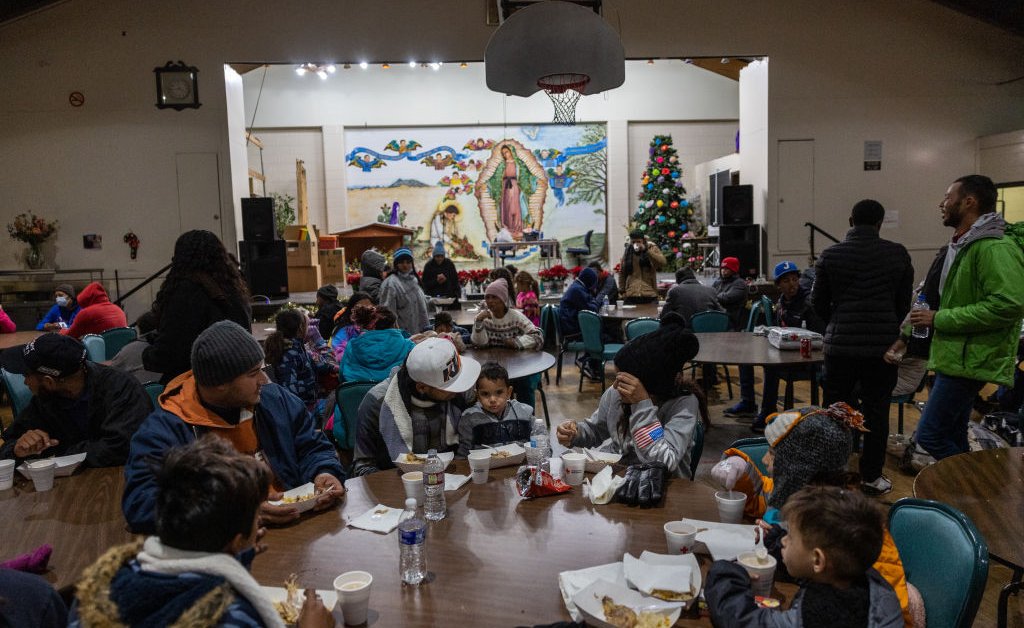 mMore than a hundred migrants gathered on the sidewalk outside Sacred Heart Catholic Church in downtown El Paso, Texas, on Monday evening, awaiting the church’s opening for food services. Children huddled under blankets while others lined up to wait for bottled water to be handed out by volunteers.

But not all of them could get a free meal: A church organizer announced that they would serve women and children first, and men 18 and older would have to wait or find other accommodations.

The Sacred Heart Church and other organizations and volunteers in El Paso, Texas, have been helping newly arrived migrants for decades. Some say the number of arrivals from Latin America they’ve seen in recent days far exceeds what they usually encounter, straining the city’s resources at a precarious time for US border policy. While the government has yet to release data for December or November, the El Paso sector of the border saw a dramatic spike in encounters in the most recently available data — there were more than 29,700 encounters in August, more than 49,000 in September and more than 53,200 in October, according to the U.S. Customs and Border Protection (CBP).

In recent days, hundreds of migrants have gathered along the banks of the Rio Grande River on the Ciudad Juárez side of the border, and many have lined up to present themselves to CBP officials in hopes of seeking asylum . The line of people that gathered outside El Paso’s border has attracted national attention, and those whom CBP has given permission to enter El Paso quickly filled local shelters. Many have had to sleep outside in the cold.

‘I do not think so [El Paso has] the capacity or the money, the financial resources, to adequately welcome so many people,” said Nicolas Palazzo, a staff attorney at the Las Americas Immigrant Advocacy Center, an El Paso-based nonprofit that provides legal services to immigrants.

The situation has been exacerbated by an eleven-hour pause over an expected change in the way migrants are processed. A court order said the U.S. was set to end a pandemic-era rule known as Title 42 on Wednesday, but the Supreme Court temporarily stopped terminating the program just two days before the deadline after Republican attorneys general from 19 states appealed to the Supreme Court. What comes next is a mystery to border organizers who work directly with migrants.

Title 42, a public health measure to combat the spread of COVID-19, has been applied by the government since March 2020. Through Title 42, the CBP can immediately deport migrants of certain nationalities, either back to Mexico or their home country, even if the migrant wants to apply for asylum. The policy has largely prevented most migrants from entering the US to seek asylum.

Some proponents and Democratic lawmakers say it’s time to stop the measure: “Title 42 is a public health order,” says Palazzo. “It’s about containing the transmission of COVID, but it’s been worked into our de facto border policy.” The Biden administration has been trying to end Title 42 since April. Last month, a federal judge ruled Title 42 illegal and said the government had until Dec. 21 to end the policy. But Republicans and some Democrats have argued that ending Title 42 would lead to an increase in border crossings that the government cannot handle, and the policy remains contested.

The Department of Homeland Security (DHS), which oversees CBP and the US Border Patrol, has said that when Title 42 is lifted, border policies would revert to the processing that existed before the Trump administration. People who reported to border agents, or who were caught attempting to enter the US illegally, would be treated under Title 8, which would mean they could take CBP or Immigration and Customs Enforcement (ICE) into custody, they could be immediately deported under “expedited removal” or an immigration judge can rule whether the person can remain in the US

On Tuesday, DHS Secretary Alejandro Mayorkas said in a public statement that the agency would continue to deport migrants under Title 42 by order of the Supreme Court. “As this phase of the process progresses, we will continue our preparations to manage the border in a safe, orderly and humane manner when the Title 42 public health order is lifted,” he said.

White House press secretary Karine Jean-Pierre told reporters Tuesday that the White House is asking for $3.5 billion from Congress to scale up processing capacity at the border, including transportation services, storage facilities and increasing the number of border agents.

It’s unclear if the migrants who formed a line beyond the El Paso border expected the end of Title 42. Many have been allowed to enter the US because of their nationality – Nicaraguans, Cubans and others, for example, cannot be deported. to Mexico or their home country, and thus are not subject to Title 42 – or because they have proven to CBP that they have other types of vulnerabilities.

The city of El Paso provided transportation to hotels for migrants as they began to crowd the streets. At El Paso International Airport, migrants filled benches and slept on the floor. But the city’s resources couldn’t keep up. On December 17, El Paso Mayor Oscar Leeser declared a state of emergency. “I do believe that our asylum seekers are not safe these days as we have hundreds and hundreds on the streets, and that’s not the way we want to treat people,” he said.

Local volunteers have raised resources by distributing blankets and food. The El Pasoans Fighting Hunger Food Bank sets up kits with diapers and baby food. The American Red Cross supplies cots and hygiene products. In downtown El Paso, volunteers have set up an Internet tent outside a McDonald’s to help migrants reconnect with loved ones.

“El Paso is a very friendly place, so we see a lot of cars coming here to drop things off, drop food and clothes,” said Alicia Gomez, a local volunteer. “This is nothing new [for the community]but the number is of course much greater.”

On Monday night, Gomez, her husband and a colleague, Nancy Rodriguez, roamed the streets in front of Sacred Heart Catholic Church, handing out clothing so migrants could layer and brace for the frigid temperatures. Rodriguez says she’s volunteered to help migrants in the past, but this time “it seems a bit more intense in terms of numbers.”

Nearby, 22-year-old migrant Katherine, who requested TIME keep her last name secret for fear of endangering her family in Venezuela, wrapped herself in a gray blanket. She left home more than two months ago, she says, because of the country’s political instability and economic decline. She hopes to earn enough money in the US to send home to her mother and sister. “I’m so happy,” she says in Spanish. “It took so much strength and sacrifice to get here.”

Katherine says she entered El Paso with her partner four days ago. He couldn’t enter Sacred Heart Church for a meal, so she chose to stay with him and skip her dinner. “We’ll just wait here and see if we get a chance to eat later,” she says. That’s also her plan for her future in El Paso: wait and see what comes next.