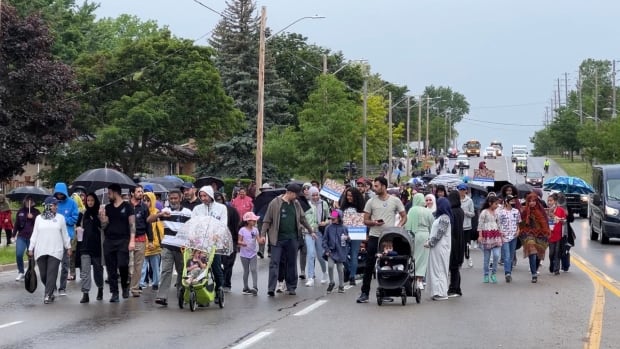 Hundreds of people took part in a march to commemorate the Afzaal family and fight against Islamophobia in London, Ontario, on Sunday afternoon, including the Prime Minister.

More than 1,000 people gathered at Oakridge Secondary School to listen to speeches before walking to London’s Muslim Mosque. It is part of ongoing commemoration events this week to mark the one-year anniversary of the murder of the Afzaal family, who were killed while walking in a hate-motivated attack on June 6, 2021.

“They were our friends,” said Aisha Rashid, who marched with her family. “The events planned today and tomorrow are helping with the healing process as it has been a very, very difficult year for the Muslim community around the world, but especially in London, Ont.”

Salman Afzaal, 46, his 44-year-old wife, Madiha Salman, their 15-year-old daughter, Yumnah, and her 74-year-old grandmother, Talat Afzaal, died when a driver hit them while they waited for a road. The couple’s nine-year-old son was seriously injured, but survived.

VIEW | The victim’s friend describes the impact of Islamophobia:

Maryam Al-Sabawi, whose friend Yumnah Afzaal and three family members were killed in a hate-motivated attack in London, Ontario, last June, reflected on what that loss meant to her and vowed to continue fighting Islamophobia.

The accused man has been charged with four counts of first degree murder and one count of attempted murder, as well as associated terrorism charges.

Friends of Yumnah, who was in grade 9 at the high school where people gathered on Sunday, organized the march to commemorate the teenager and show solidarity. For the past year, as part of their grieving process, they formed a group called Youth Coalition Combating Islamophobia (YCCI).

“The importance of it really is to reclaim the streets and be present in the community and give the rest of London a chance to show their solidarity once again,” said YCCI organizer Selma Tobah.

Thousands of people, including politicians of all walks of life, descended on London last year to march in the same event. Prime Minister Justin Trudeau returned on Sunday for a surprise visit and first met the youth organizers at the school’s library.

He thanked the students for their work in the fight against Islamophobia and said he was honored to join the community for this event. He said his government has done some work to tackle Islamophobia and racism in Canada, but there is still a lot of work to be done.

“Our government is investing in the launch of a new anti-racism strategy and national action plan to fight hate. We are also launching a process to appoint Canada’s first Special Representative to Combat Islamophobia,” Trudeau said.

But Esa Islam, a cousin of the Afzaal family, took the stage before the march and scolded politicians for what he called “unfulfilled promises” and “hollow words of grief.”

“Don’t we remember Bill 86, the… [Our London] Family Act?” the Grade 9 student asked the crowd, referring to a provincial law drafted by the NDP, in conjunction with the National Council of Canadian Muslims, to curb Islamophobia.

It feels there is still an unwillingness from our leaders to take action against hatred and Islamophobia– Esa Islam, cousin of the Afzaal family

The bill was not passed until the legislature was dissolved ahead of last week’s election. Doug Ford’s progressive conservatives have made no commitment whatsoever to revive it.

“We still have no commitment from the provincial government to approve it,” Islam said. “So despite all the promises we made last year, it feels like our leaders are still unwilling to take action against hatred and Islamophobia.”