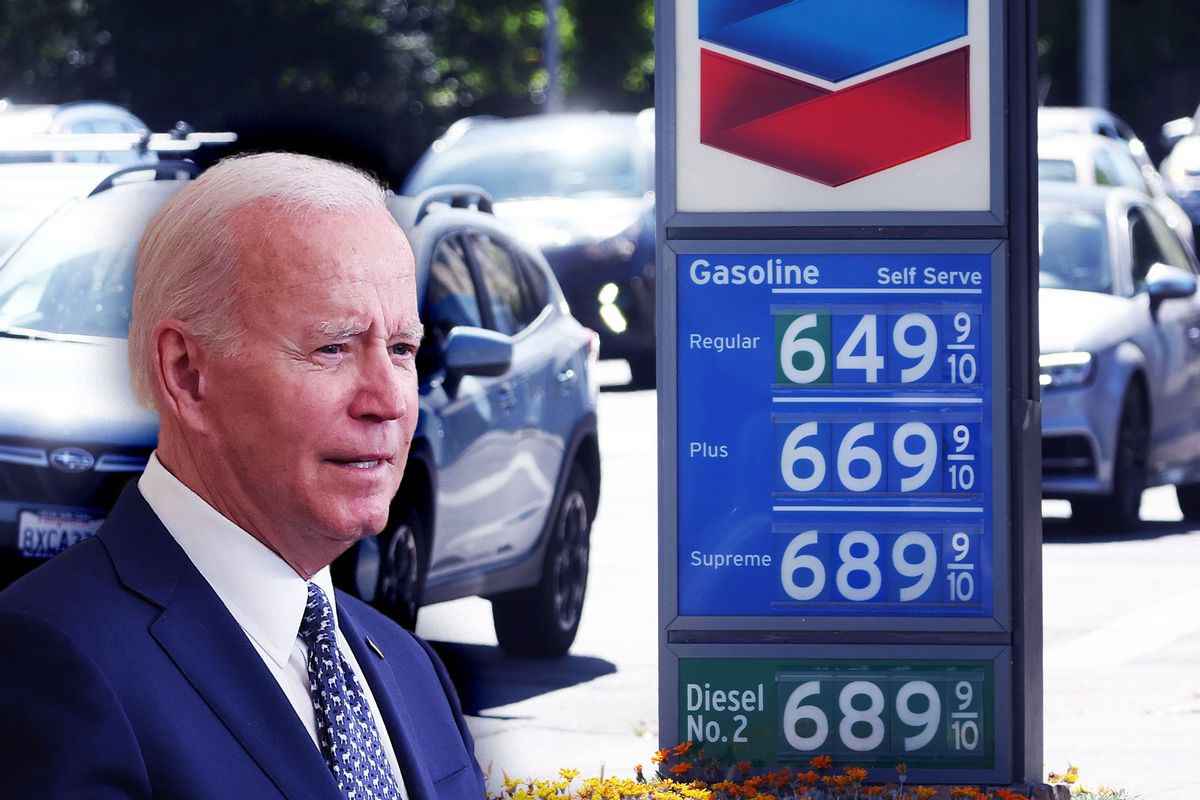 A handful of Congressional Democrats are turning their attention to a mysterious loophole that, as TYT previously reported, is driving high prices for gas and food. Rep. Ro Khanna, D-Calif., told TYT he wants the Biden administration to close the loophole that allows Wall Street speculators to gamble on commodity prices, fueling inflation.

The Biden administration could cut gas prices by as much as 25% by acknowledging the problem, a former Commodity Futures Trading Commission (CFTC) official said last week. Michael Greenberger, the CFTC’s former director of trade and markets, gave a virtual lecture hosted by Americans for Financial Reform (AFR), in which other organizations indicated that they are making new efforts to close the loophole.

During his remarks, Greenberger told participants that Senator Maria Cantwell, D-Wash., was aware of the issue and interested in pursuing it. Another attendee, former Commodity Markets Oversight Coalition chairman Jim Collura, told TYT that he briefed Representative Paul Tonko, DN.Y., after Greenberger’s speech and Tonko expected to take the matter to the House leadership. to put in order. (Neither Cantwell’s nor Tonko’s offices responded to requests for comment.)

RELATED: Why Joe Biden Is Afraid of Blaming Big Business for Inflation

Public Citizen’s Tyson Slocum has also expressed concerns about how the loophole is allowing major financial firms to overwhelm healthy pricing with massive amounts of commodity-based swaps — essentially betting on commodity prices. The problem isn’t just gas and food; minerals and everything else traded on commodity exchanges will be affected.

In healthy markets, buyers and sellers set prices by finding a middle ground between them. One party wants low prices, the other wants high prices. But thanks to an obscure CFTC passage — footnote 563, in regulatory guidance — buyers and sellers of oil and other commodities are outnumbered by about 10 by Wall Street traders, none of whom have any real buyer incentive to keep prices down, because only few of them ever actually buy it; they usually bet on it.

There are far more deregulated traders than real buyers and sellers – and as a result, price spikes caused by the war in Ukraine are greatly amplified.

Since there are many more deregulated traders, real buyers and sellers are now virtually irrelevant when it comes to setting prices. That, Greenberger says, is why Ukraine and other supply problems are disproportionately affecting prices: Wall Street amplifies spikes where a functioning futures market would absorb them.

The resulting, ongoing inflation has dragged the public down economically and dragged President Biden down politically. On Sunday, the national average for gas prices reached $5 a gallon for the first time ever. Biden’s polls, meanwhile, are reaching new lows.

As Axios noted, Biden’s policy responses have so far “failed to curb the upward rise in gas prices.” That’s because the Biden administration’s actions were largely in response to claims by the oil industry and its Republican allies that the problem is supply.

But that’s not the case, as Greenberger and others have pointed out for months. If supply were the problem, prices would drop.

In healthy markets, a price increase would lead to competitive undercutting. In theory, an opportunistic gas company could try to win new customers by keeping their price-inflating competitors down. But even if some wholesalers did, such as Russia, it wouldn’t push the market price up, because sales of gas companies are a drop in the ocean compared to Wall Street’s bets.

As Greenberger said in his speech last week, oil companies can benefit from rising prices, but they are not the main driver.

And Greenberger has more than a little experience with the problem. He played a similar role during the time when gasoline prices hit $4 a gallon, pointing to a regulatory weakness dubbed the “Enron loophole,” which allowed Wall Street to speculate on energy. In 2008, both presidential candidates, John McCain and Barack Obama, pledged to close the Enron loophole. Prices fell.

As Greenberger, who now heads the University of Maryland Center for Health and Homeland Security, documented in a 2018 research paper, it took the Obama administration a while to grasp the latest loophole: footnote 563. In October 2016, the Obama CFTC was had found the loophole and started the process to close it before it could trigger a global financial crisis. As TYT reported, Donald Trump’s deregulatory crusade led first to the delay of that resolution and then to its death.

Today, Greenberger says, the Democrat-dominated CFTC could take swift action to reinvigorate that solution. But despite Obama’s experience — when Biden was on his side — and despite intense political pressure to tackle inflation, there’s no evidence Biden knows about Wall Street’s role, let alone what to do about it. to do.

In fact, on Monday, the Washington Post reported that Biden privately is both frustrated and skeptical of the work of his own government. White House Chief of Staff Ron Klain, the Post reported, has directed agencies to identify price-cutting measures they can take. (The White House did not respond to TYT’s requests for comment or to this story last month.)

The irony is that, according to Greenberger, the Biden administration doesn’t need to do much more than say a few words in public to have a dramatic impact on gas and other prices. In his speech, Greenberger said, “If they just… [say]”Hey, this is going on, this is bad, we’re going to look at it,” I think the oil price would drop at least 10% after that recognition, maybe 25%.”

Until now, there has been little evidence that Congress sees the problem. Despite a long wait for the White House to submit its CFTC nominees, the Senate Agriculture Committee took extra months to vote on their confirmation. And even today, it’s not clear if Biden’s new appointees at the CFTC have moved on, despite Klain’s request, and though Chairman Rostin Behnam is a veteran of previous fights over footnote 563.

However, as a member of the House Agriculture Committee, Khanna sits on the subcommittee that oversees the CFTC. And Khanna told TYT last week that he supports Greenberger.

In a statement, Khanna said: “I am concerned about the role that Wall Street speculators are playing in driving up the price of oil and food futures.”

And Khanna may not be alone. In an email, Collura wrote that, after the AFR talk, he “had the opportunity to explain footnote 563 to Congressman Paul Tonko.” Collura said Tonko was “alarmed to say the least. … He promised to bring it to the attention of the Democratic leadership.” (Collura works for the New England Fuel Institute, which attended Greenberger’s speech but did not speak on behalf of the organization, which has not taken a position on the matter.)

Khanna also endorsed Greenberger’s claim that deregulation of swaps exacerbates inflation. As Khanna put it, “The lax swap regulation has been a windfall for banks and contributed to price spikes. I support reforms like the one proposed by the Obama administration in 2016 that would close this loophole.”

As Greenberger pointed out in his 2018 paper, the International Swaps and Derivatives Association cut the loophole for itself when the CFTC translated the Dodd-Frank Wall Street Reform Act into rules and regulations. The result: Wall Street’s largest banks were able to escape regulation of virtually all of their swaps by executing them through branches that they claimed were overseas and unbacked by their parent companies. Neither claim was true, and in some cases the branches themselves were barely more than a piece of paper.

Greenberger’s short-term solution is for the administration to address the issue publicly. The long-term solution is to re-regulate those swaps. A number of interest groups told TYT that they are now looking into it.

An Accountable.US spokesperson told TYT that their organization was “present at the [AFR] call and our team is investigating the deregulation angle.”

Suppan’s email referred to previous IATP agreements on the matter. For example, in 2020, the IATP warned the CFTC that rules were needed to prevent the emergence of “a system that amplifies price responses to…shocks.” The letter, Suppan wrote at the time, was in response to Trump’s CFTC proposing a new policy that would destroy (and later did) the Obama-era rule proposed in 2016.

AFR’s conversation with Greenberger was titled “Deregulation That Drives Inflation”. According to the invitation, “too little attention has been paid to how the Trump administration has enabled Wall Street’s manipulation of commodity prices.”

The loophole in footnote 563, the invitation reads, “allows major banks to evade US regulation, making it possible to manipulate prices in some of the most volatile sectors that help drive inflation. Professor Greenberger will explain to us how we got here, what it means for inflation, and what we can do to fix it.”

After the call, Andrew Park, senior policy analyst at AFR, told TYT: “For all the finger-pointing on the causes of inflation, both commodity and banking regulators should be looking into how closing this critical loophole for commodity swaps is helping this unproductive speculation.” over several essential commodities, which in turn have raised the prices billions of people pay for fuel and food around the world.”