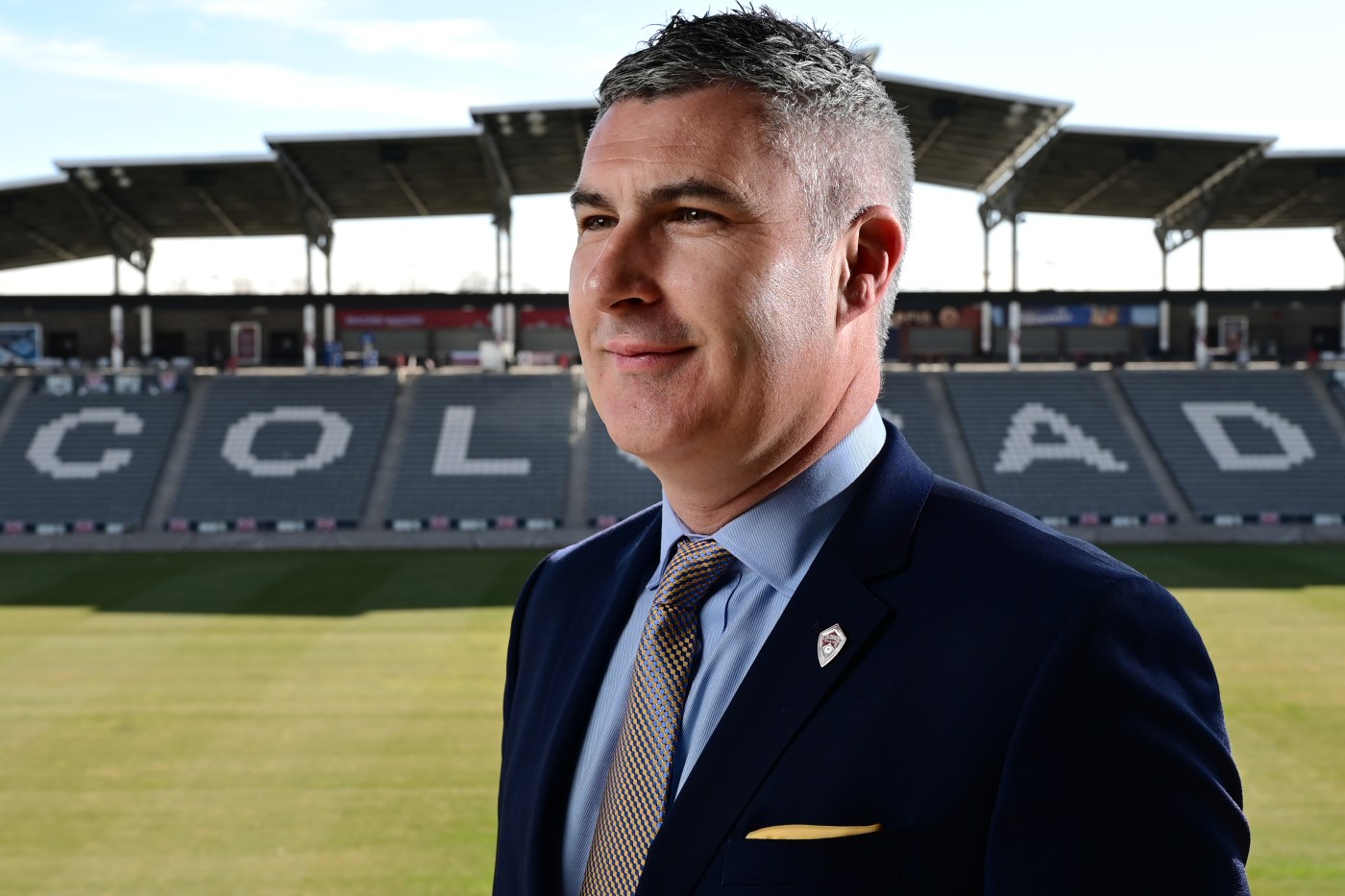 The evidence suggested to Noel Mooney that his roommate, Pádraig Smith, was looking for a new destination.

It soon became clear where he wanted to end up.

The most transparent clues were found in Smith’s streaming setup in the Irish compatriots’ apartment in Nyon, Switzerland: in the bathroom, a tablet was broadcasting MLB games, while the TV in the living room was showing NFL Sundays and the kitchen being home. was a third unit dedicated to Major League Soccer.

“I don’t know how to explain this,” said Mooney, then a colleague of Smith at the European football governing body UEFA in the early 2010s. “He was almost stateside in his mind.”

The seeds to move were planted during a series of visits to the US during Smith’s early years. When the right opportunity presented itself, he put aside his performance as a financial analyst at UEFA and made the leap across the Atlantic to take the helm as sporting director of the Colorado Rapids.

Now the executive vice president and general manager of the club, Smith has found a home on the Front Range. And to understand what made him a steward of football sustainability and a savvy roster builder, just look at the experiences that led him to Commerce City.

Smith, the eldest of six, grew up in Mornington, County Meath, a coastal town of 11,000, nestled between the Irish Sea and the Boyne Estuary. As in so many Irish households, sport has been a focal point from an early age.

Gaelic Athletic Association games — hurling and Gaelic football — are generally held in County Meath. The game’s origins go all the way back to the 1880s, and the communal ties are so strong (54 clubs for 220,000 residents) that it can be hard to see past anything but the GAA. The Smith family all played, but Pádraig kept getting withdrawn from football again and again.

His interest in the sport coincided with a golden era for Irish football. The national team reached three major finals between the 1980s and the early 1990s, and the country’s best players caused a stir at England’s most iconic clubs. He also found an unparalleled sense of belonging as he supported his local team Drogheda United.

There was just one problem: many of the teams he followed close to home struggled to keep afloat.

***
In the late 2000s, UEFA was drafting a blueprint of new rules to prevent teams from overspending, known as Financial Fair Play. The organization knew exactly the person to add to the steering committee: an up and coming Smith.

Smith quickly rose through the ranks at the Football Association of Ireland (FAI) and became a representative at continental meetings. Once on the committee, he ostensibly represented the smaller countries of Europe, while on the other side of the table sat a representative of the big five: England, France, Germany, Italy and Spain. The back-and-forth discussions proved vital to the final framework.

In 2007, he joined the FAI as an internal compliance officer after five years at Ernst and Young as an audit manager. His job was to take a deep dive into the dire financial picture of the League of Ireland and implement a quasi-salary cap to prevent clubs from folding. At the time, Irish teams were bleeding and spending 96% of club income in Europe on player salaries. Keeping afloat became so problematic that key members, including Smith, took issue with the Irish Parliament.

Relying on his knowledge of the use of salary caps by US sports leagues, Smith succeeded in reforming the association’s wage structure to 65% club income for player salaries. In 2008, it became the first European football organization to operate mandatory salary cap schemes.

Years earlier, Smith watched baseball teams use data to more accurately assess players’ worth — a discovery made after spending the summer of 1999 on Cape Cod on a J1 visa.

“It was definitely (by) baseball and understanding that if you dig deeper, you could see things that would give you an advantage,” he said. “…There’s a curiosity to find out why you might learn more beneath the surface and why a player can be observed in two completely different camps.”

Smith was acting head of finance for the FAI from 2010-2011 and later manager of financial analysis at UEFA, where he worked on Financial Fair Play until 2014.

dr. Helen Raftery, CEO of non-profit Junior Achievement Ireland and lecturer in sports governance at University College Dublin, worked with Smith as director of strategic development at FAI. She remembers his fresh look.

“(Pádraig) could see that there were many things to overcome,” said Raftery. “That didn’t stop him from seeing yes, there is a different future here, a better result that we can go for. I think that mix of the ability to dream and see things longer term and strategically, and also, I mean, being forensically interested in details… that’s a really unusual mix.

***
Less than five years after ‘The Rapids Way’ in The Post landed on driveways in Colorado, Smith has the club in a healthy, vibrant place.

The Athletic highlighted many of its traits in its executive-led annual anonymous MLS survey. Smith was recognized as one of the easiest executives to work with, as well as the most difficult negotiator. Unsurprisingly, the Rapids were named “the team that does the most with the least.”

There is no better compliment for Smith.

“The way we talk about this is that it’s (coach) Robin (Fraser) and the coaching staff’s job to win from Saturday to Saturday,” said Smith. “My job is to prepare from year to year.”

Since being appointed to his current position in 2018, Smith has been adamant in establishing and implementing his vision. He fully admits that he had to correct the course, but with consecutive playoff appearances and a third not ruled out this fall, a foundation has been laid.

Auston Trusty, Sam Vines and Cole Bassett, all of whom now play in Europe, are concrete examples. Trusty arrived for $600,000 but was sold to Arsenal within the KSE family for a reported $2 million fee, while the two Coloradans could be the staples of the US men’s team for years to come.

“I don’t think I could have imagined living in Mornington again, this is the route I would have taken, but certainly from an early age I knew I wanted to do sports and knew I wanted to be in the United States be,” he said. “It’s unbelievable that those things come together and be the current custodian of this club. It really is a dream come true in many ways.”