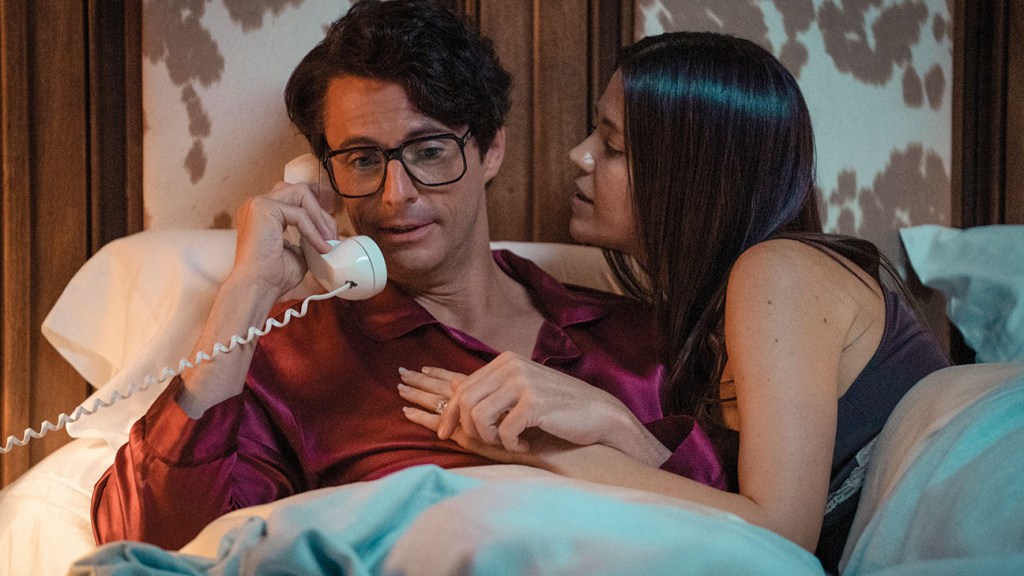 Transforming yourself into a Hollywood icon is one thing, but for Matthew Goode to truly succeed as Robert Evans — a titan of 1970s cinema who helped create some of the greatest films in history — he had to go all in. It wasn’t just the late Paramount producer’s suits and penchant for cool eyewear; British Goode had to perfect Evans’ toned down New York accent and deep tone to sound like the man who forever helped reshape cinema in Paramount+’s The offer† The limited series tells the strong Hollywood story of how Evans – along with Albert Ruddy, Mario Puzo, Francis Ford Coppola and a number of other movie stars – helped the godfather from a successful novel to one of the most important films ever made. Goode spoke to THR about how his wardrobe (and many glasses) helped him embody the infamous film director.

Did you ever meet Robert Evans when he was alive?

No, I never did. I spoke to a few people who did and some who knew him very well. I recently found out that I was once in the same place as him – we were in the same cinema screening, [2009’s] a single man, but I never thought, ‘There’s Bob Evans. I’m going to meet him.” Even if I had known, I don’t think I would have gone to him. I think I would have run away.

He had an unmistakable voice, a very specific way of speaking that was quick but easy to understand, interspersed with cool phrases and Jiddishim. How did you get it so good?

It was quite terrifying, I can assure you, when Dexter [Fletcher, executive producer] said, “Will you do it?” I was like, “Oh Lord.” I knew who he was, of course, I saw it The child remains in the picture [the 2002 documentary based on Evans’ 1994 memoir] when it came out, and I just thought what a brilliant program that was, but I didn’t want to listen to that voice because that’s its future. He’s in his 70s, and rhythms change. I went to YouTube and found some great interviews from the 1970s, which I watched hundreds of times. I think I had about a month and a half from when I was asked to do it to my first day [of filming]† That really is a wonderful time to sink your teeth into. I did that slightly embarrassing thing to tape myself and watch his physicality and certain gestures he used. I also kept in mind that when someone gives an interview, they show a different side of themselves. This project focuses on a time when his life is a little more messed up, so I have to – to quote Lumbar puncture – set it to 11.

Evans’ Beverly Hills mansion was sold in 2020. Did you have a chance to see it while in LA?

I did! Well, not in the way I’d hoped. I went to Armani to get a costume for a premiere, and when I was done I thought, “Bob lived not far from here. I have nothing else to do today. I’m going to walk from here to his house. It’s a lovely walk.” I don’t know what I was thinking l [thought]maybe there is a housekeeper or something. I knew he was dead, of course, but maybe someone would take pity on me and let me in. I just wanted to see the pool. It would be nice to see where the big man lived. There was a nice foreman there who came to the gate. I was like, “Is there any chance I can, uh, come in and look at the pool?” I think if I had been Brad Pitt or someone with a huge build they might have been fine, but they were like, “Who’s this weird English guy?” They didn’t let me in. But I offered a few words to… [Evans], and then I thought, “Why am I talking to a dead man?” And then I promptly left and walked home.

Something I appreciate The offer is the attention to detail, especially all the famous LA locations like Musso & Frank or Chateau Marmont. Were you able to spend time in any of those places?

We were unable to actually film at Chateau Marmont due to ongoing disputes between the staff and? [hotel management]which is a shame, although I thought [the production designers] mocked it pretty well. I went to the Polo Lounge. That was, you know, a little research. I know it has changed over time; it’s too modern there, so we couldn’t film there. We filmed at Musso & Frank which is great. I think I went out four times in a few months [of filming], and that was one of the places. I was like, I have to come back here because I keep hearing how when they make a martini you get a little pitcher of it. Who doesn’t want an extra martini?

Those martinis can put a big man on the floor.

Yes they will. They will sneak up on you.

The wardrobe department has you fabulously dressed as Evans. Did you have input, or did you just let them do their job?

I think I only have input if you feel that something isn’t going as you would expect or envisioned. It was a lot of polyester—the 70s weren’t necessarily the most comfortable era. But it was brilliant. They found some Yves Saint Lauren t-shirts, I don’t know where they got them, but they were exactly the same ones that Bob would have worn. They had a double knot at the top and four knots at the bottom [wrist]† It was so starched, after about three days my fingers were bleeding. And then, of course, they released 20 pairs of glasses. They asked, “Which one do you want to use? And I thought, “I think we should just use them all.”

You have a nice variety of glasses on the show.

Yes. We get through a lot. There are a few scenes where I was like, “This has a little more gravitas, so [the glasses should be] something more serious.” I stuck with the classic black couples, but I had a lot of fun every day with Dusty, who had the props. I often said, “What are you thinking today, Dusty?”

You played Charles Ryder in Brideshead Revisited and a lawyer on the good woman† you’ve been busy The crown and Downton Abbey, and now you’ve played Robert Evans. Who is your best dressed character?

A lot of people asked me where I got that sweater when I played Uncle Charlie in stoker — I had this mustard sweater and suddenly that was all anyone was talking about. And Charles was pretty well dressed, but I’m getting to the age where I forget what kind of hell I’ve been in. I would have to do IMDb myself, which would be terrifying to do.

It sounds a little crazy when you put it that way, but yeah.

No, it’s beautiful. If you had the chance to talk to him now, what would you ask Robert Evans after you got to play him?

Do you think you’d be okay with it?

I think we would bond. He would tell me that I should have been in the sun a little more to really get a better tan.

Interview edited for length and clarity.

This story first appeared in a standalone June issue of The Hollywood Reporter magazine. To receive the magazine, click here to subscribe.