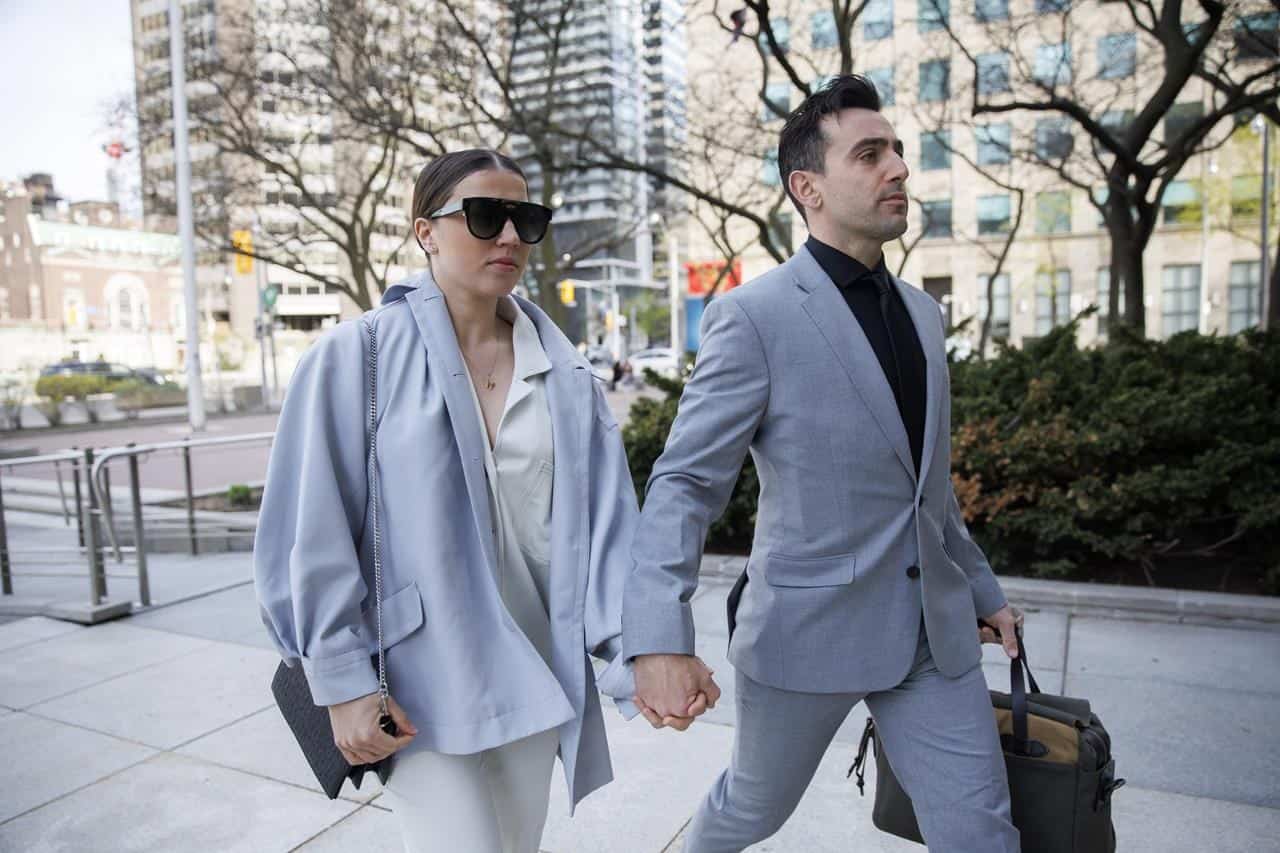 By the Canadian Press

Canadian musician Jacob Hoggard arrives with his wife Rebekah Asselstine for his sexual assault trial at the Toronto courthouse on Tuesday, May 10, 2022 in Toronto. THE CANADIAN PRESS/Cole Burston

Jacob Hoggard, the frontman of Canadian band Hedley, has been found guilty of sexually assaulting an Ottawa woman, but was acquitted of the same charge against a teenage fan.

Hoggard, 37, has also been found not guilty of sexual interference, a charge relating to sexually touching anyone under 16, in an incident involving the same fan when she was 15.

The singer, who wore a dark suit, hugged his wife in court after the verdict was read. She wiped the tears as he sat back in his seat.

Both complainants stated that they were left bleeding and bruised. They all said Hoggard hit them, spit in their mouths, and called them derogatory names like “slut” and “whore” during encounters, and that at one point he restricted their breathing.

The younger complainant said Hoggard pushed her face into the pillows until she thought she would pass out, while the Ottawa woman said he strangled her so hard she feared she would die. The second complainant also said that Hoggard once dragged her to the bathroom by the legs and asked her to pee on him, then said he would pee on her, which she both refused.

The Crown urged jurors to consider the similarities between the events remembered by two women who never met or spoke, arguing that they reflect a pattern of behavior.

Meanwhile, at trial, Hoggard testified that he had “passionate” sex with the complainants and that he did not sexually touch the teen until she turned 16.

“I knew it when she turned 16,” Hoggard testified, adding that he made sure to “be responsible and not break the law.”

He denied swallowing the complainants or restricting breathing, but said some of the other things they described — including hitting, spitting, scolding and urinating — were part of his sexual preferences and could therefore have happened. He described the kind of hitting he likes as softer tapping.

He testified that his memory of the encounters was not clear, but he knew that the complainants agreed based on their verbal and non-verbal cues, and because it was his custom to pay attention to his sexual partners.

Defense lawyers claimed the women lied about rape after Hoggard rejected them because they were ashamed and upset that he had used them for sex.

The jury, which appeared to consist of 10 men and two women, began deliberations last Tuesday and twice indicated that they were stuck on “some” points. Each time, the judges were asked to keep trying. They echoed most of the testimony of the two complainants and Hoggard, and asked several questions about legal issues, many of which were consent-related.

Since Hoggard admitted to having had sex with both complainants, the case revolved around the issue of consent, with the jurors left to determine whether the encounters were violent rapes, as the complainants alleged, or consensual one-night stands, as the singer claimed. claimed.

The jurors were told that if they found that the complainants did not agree, they would have “little difficulty” in concluding that Hoggard knew or deliberately ignored that they did not agree.

Over the course of the roughly month-long trial, jurors heard dramatically different portraits of Hoggard, a musician whose band, Hedley, rose to fame after coming third on the reality show Canadian Idol in 2004.

Hoggard’s lawyers described him as an insecure, flawed man who, while touring, even when in a relationship, sought validation from women through frequent one-night stands. He had collected a list of women in several cities and contacted them when he was in town, sometimes arranging transport to take them to his hotel, they said.

The singer may have been arrogant to women and negligent of their feelings, but he is not a “sadistic serial rapist,” attorney Megan Savard said in her closing plea to the jury.

She said Hoggard had no detailed recollection of the meetings at the heart of the trial, as they were simply two of the countless reciprocal arrangements he’d had over the years.

The fact that he didn’t try to prevent the complainants from leaving the hotel, or pressure them to keep the encounters secret, is much more consistent with consensual sex than with a violent rape, Savard argued.

The Crown, for its part, portrayed Hoggard as a “legitimate sexual opportunist” who didn’t think he had to accept no when it came to satisfying his “unusual” sexual desires.

Prosecutor Jill Witkin argued in her latest submissions that the singer could not specify what sounds or gestures the complainants made to consent, particularly for acts such as hitting or spitting.

None of the complainants wanted what happened in those hotel rooms, but Hoggard did and he acted on it, she claimed.

The Crown also argued that Hoggard had a history of lying to get out of difficult situations, as he had with the complainers and romantic partners he cheated on.