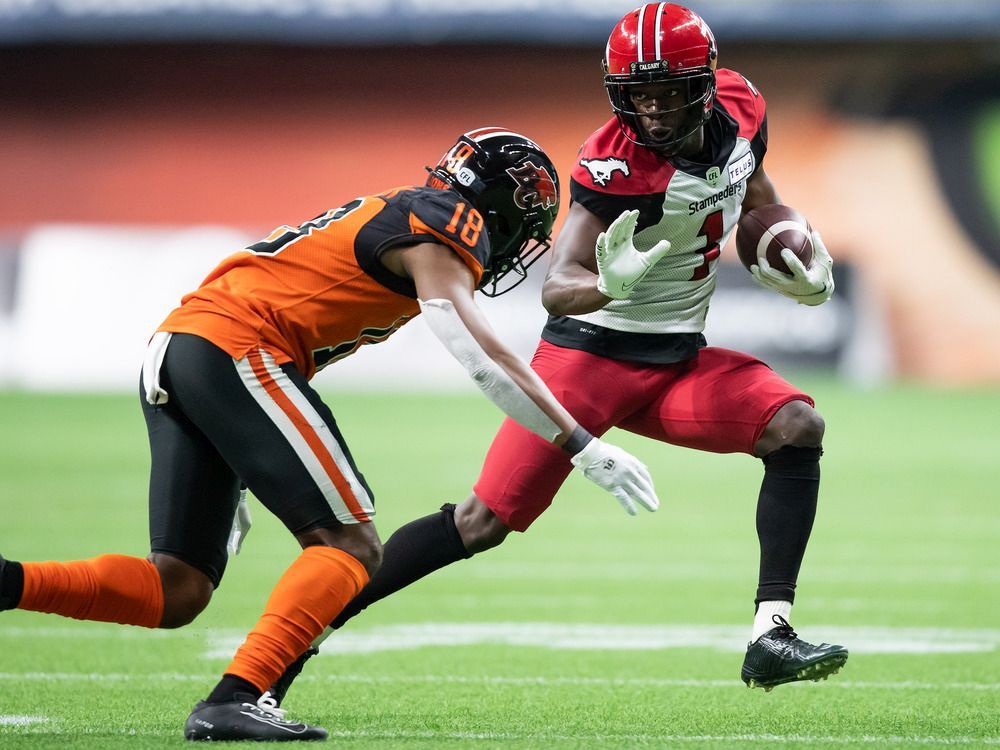 CALGARY — Hergy Mayala said he is focused and on a mission this season.

“To be the best receiver in the league,” Mayala proclaimed Wednesday.

The Pierrefonds native, signed as a free agent by the Alouettes this winter, is looking to start the regular season productively Thursday night against the Calgary Stampeders – his former team – at McMahon Stadium. Mayala admitted to watching the schedule when signing and circling the date. It is the only meeting between the teams in 2022.

“I’m absolutely excited to go up against them,” said the six-foot 208-pounder. “So early in the season is probably the best feeling. This game means a lot. I just want to go out and show what I can do. Show who Hergy Mayala is. This game is going to be great and I have to do my best.”

While Mayala has fond memories of his two seasons with the Stamps and denied any bad blood, he is also disappointed with the end of his tenure in Calgary. The 25-year-old was prolific as a rookie, catching 38 passes for 562 yards and scoring five touchdowns. But last season, he became less of a factor in the offensive system, with 29 receptions for 284 yards. He failed to score.

“There was a lot going on that year,” he says. “Everyone had to play a part. I thought my role would be bigger and more impactful. It’s the role I had to take. I did my best with my role. I didn’t have a chance to put it all together my second year.

“Calgary gave me the chance to make my dream come true,” added Mayala, who played collegiate in Connecticut. “Being part of a winning organization has set me up for the rest of my career.”

Mayala is one of two Canadian starting receivers on Montreal, along with Kaion Julien-Grant. Head coach Khari Jones is happy with what he has seen from Mayala and expects better days to come.

“I liked him when he played for Calgary – and I like him even more playing for us,” Jones said. “He is a true student of the game and knows what he is doing inside and out. He has all the skills you look for in a receiver. He runs great routes, catches the ball well and runs after the catch. He’s just a real pro and a good fit for what we do. As the season progresses I will be able to use it in different ways.

“He’s a fighter and a competitor. You see that when he plays. I don’t feel there’s any difference between him and the American receivers. He goes out… and makes plays. He’s just a good receiver. “

This game also adds value to starting Canadian receiver Tyson Philpot, who won a Vanier Cup with the University of Calgary before being selected ninth this year by the Als. While Philpot, only 21, will play more of a backup role on offense for now, he’s talented enough to be activated for the opener.

“It’s so surreal,” he said. “I have so much time to play here and be comfortable in this stadium. To play your first pro game here is the best thing that could happen. I’ve been waiting for this opportunity. Lots of memories come flooding back when I come back and stepping onto the field. I’m just excited and proud to be here.”