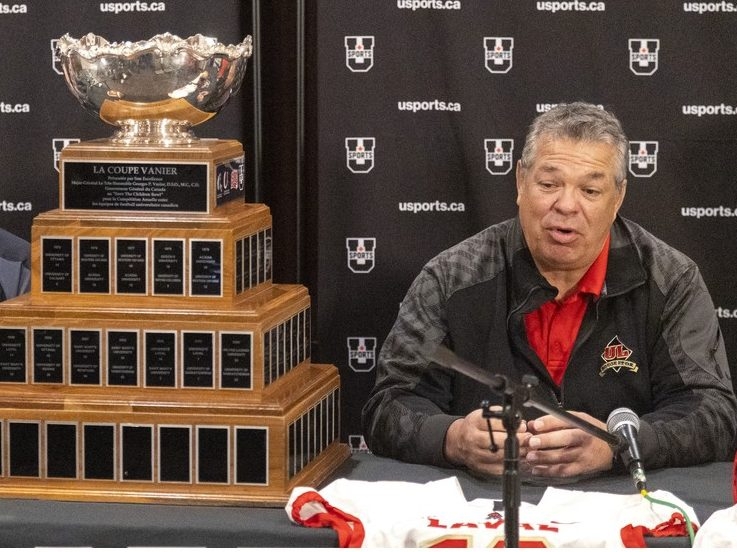 Glen Constantin has done it all and won in U Sports football, but the longtime Laval head coach has never made a run up the professional ranks.

And it really doesn’t sound like he plans to try anytime soon. He’s in his 21st season with the Rouge et Or, he has 201 victories to his name, his team plays for the 13e time in the Vanier Cup on Saturday in London, Ont., and he sees no urgent need to continue.

“Not really, to be honest. I am very happy here,” he said on Thursday. “Sometimes you recognize where your strengths lie,” he said, and his are in the amateur ranks, which he says are driven more by coaches than players.

The Montreal Alouettes of the Canadian Football League need a new head coach and their GM Danny Maciocia – who coached for the University of Montreal against Laval for years – has a shortlist of four candidates. Is Constantin on it? Not necessarily, because Maciocia knows how happy Constantin is with Laval.

Is he a viable candidate for a CFL coaching job? I would say yes, he is someone you would consider. He’s the kind of guy, if it’s something he’d like to do I’d encourage any organization to interview.

And therein lies the problem. Constantin has said he would never hire an aviator on a short-term contract in the CFL, partly because of the security he has with Laval. And how many CFL organizations would be willing to offer a long-term deal to someone who hasn’t spent even a minute coaching with the pros? Not much.

“I think he’s super happy there,” said Maciocia. “I think they treat him so well. He has a great performance. He can attract the best of the best. He doesn’t deal with professional footballers, free agency, who do I pay and who do I walk away from? every position attracting the best players in the pros you can’t just do that because you’re conditioned by the salary cap I would think that the day Glen might walk away and I don’t think it will be anytime soon there will be a lot of professional coaches will be in line for that job.