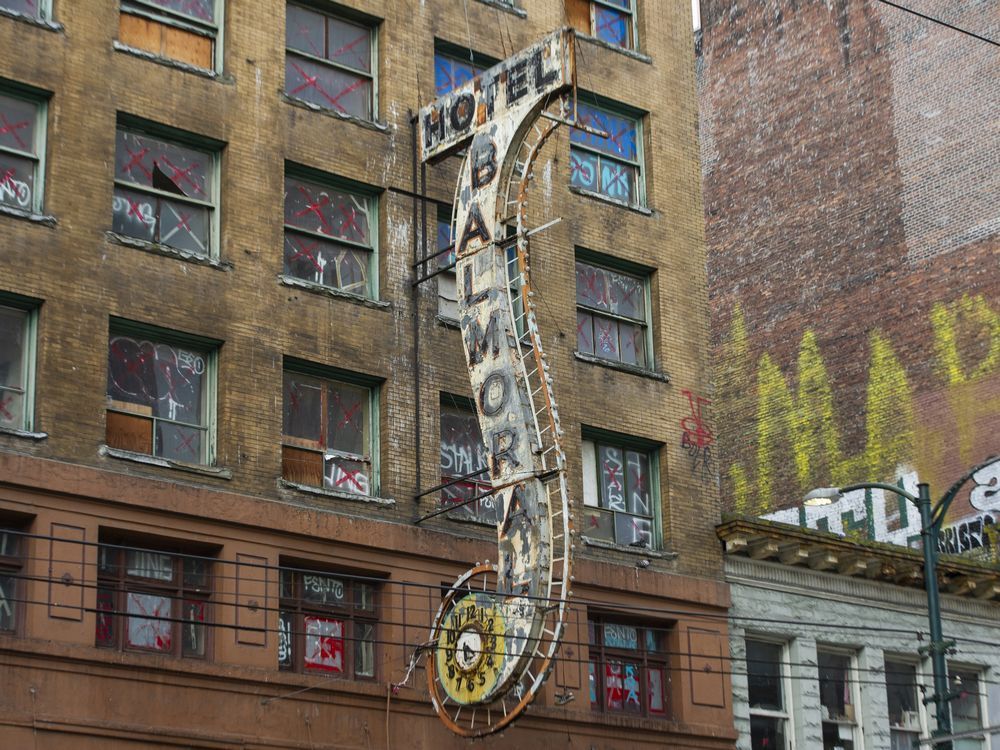 After eight decades at 159 East Hastings St., the Balmoral Hotel’s iconic neon sign was demolished on June 26. When and if it will go up again is a mystery.

The sign has been taken to Knight Signs in Delta, where its condition will be assessed. But little information came out of the city of Vancouver about what’s going on.

“At this point, it’s too early for us to discuss our plans for the board, but (we) can give you an update once the reports and consultations are complete and we have a decision,” a city spokesperson said in an email. -mail.

The sign was torn down as part of the upcoming demolition of the Balmoral, one of Vancouver’s worst slum hotels before the city forced it to close in 2017.

Now owned by the city, the building has deteriorated so much that the city has decided to tear it down rather than rebuild it.

The sign was one of the most distinctive elements of the hotel, which opened in 1912. The sign was probably erected in the late 1930’s or early 1940’s and features “Hotel” and “Balmoral” at the top running down a gentle curve ending with a neon clock, like a dot.

Some of the lettering is in ruby ​​neon, some in green, and there are light bulbs running up and down the sides. In its day it was a real thing, one of the largest and flashiest neon signs in the original downtown Vancouver.

Vancouver was once the neon capital of Canada, home to an estimated 19,000 neon signs. Most have been knocked down, but the Balmoral board was one of the survivors.

The sign has looked a little rough over the years – the can containing the neon letters needed a paint job.

But neon expert John Atkin said it may still be salvageable.

“Traditionally you had a maintenance contract with your sign company and they came by regularly to paint, check for rust, etc. So the signs were generally well maintained.

“It looked like it was in good condition. There was no obvious rust that had come through the sheet metal.”

That said, “knowing how long it sat in the building without any attention, there were probably internal weaknesses and all.”

Even if there are problems, Atkin said you could make a reproduction based on the original board.

“The best thing for the board is to use the existing board as a model and rebuild it as a new board,” he said.

“Because trying to retrofit it and the amount of rework … it should be used (as) a three-dimensional drawing to build a new version of it.”

“Water had collected in the can and the entire bottom of the can was basically rusted,” he said. “So structurally the sign was not in good shape. However, the tubes were in good condition.

“So the board was taken down and to the shop where it was measured and everything was copied exactly. The tubes that were in good condition and still lit were put back on the board.

“Actually, I think that’s a very good heritage, because it looks good. The dimensions are right, the paintwork is right, even the metalwork.”

Atkin said the neon was still working on the Balmoral sign when it was turned on, and thinks it should be part of a restoration because it was a rare type of neon.

“The green on the dial is an exceptionally rare tube that is no longer made,” he said. ‘The ruby ​​glass – you can’t get a ruby ​​glass like on the Balmoral. So if those tubes are really in good shape, they (can) be reinstalled on the new can.

A private company has also inquired about purchasing the sign should the city decide it would be too expensive to restore and reinstall it in whatever building replaces the Balmoral.

More news, less ads, faster loading time: Get unlimited, ad-lite access to the Vancouver Sun, the province, National Post and 13 other Canadian news sites for just $14/month or $140/year. Sign up now through the Vancouver Sun of The Province.