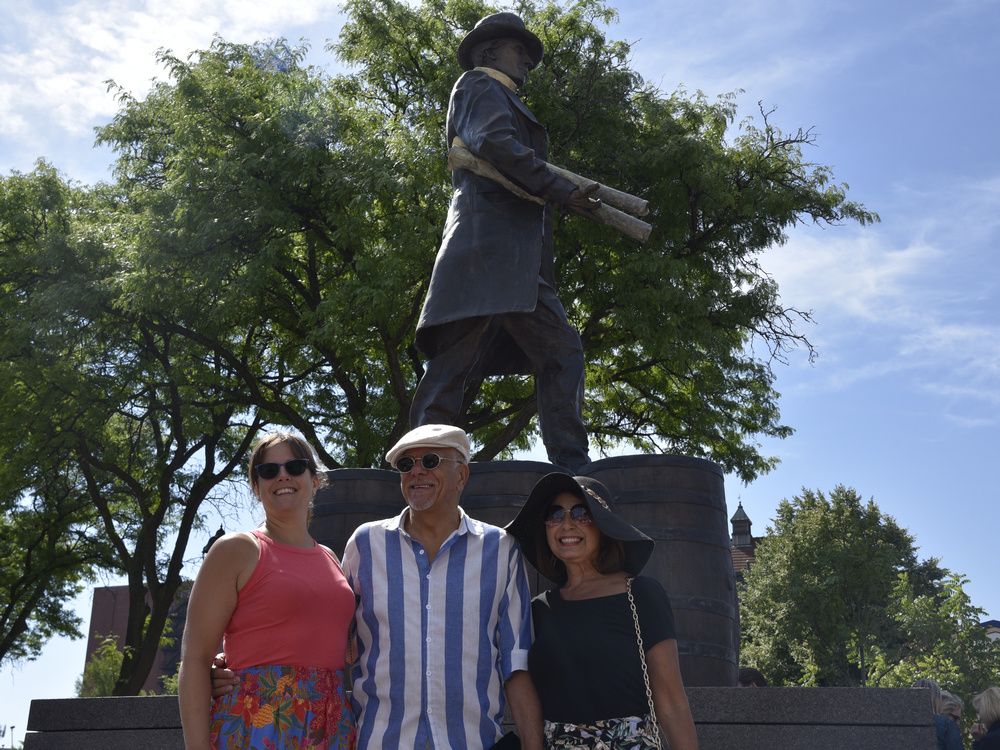 It was a celebration of 206 years in the making.

Windsor marked Hiram Walker’s birthday over the weekend with three days of events celebrating the light behind many of Windsor’s most beloved institutions and industries.

The festivities kicked off early Saturday with the unveiling of a larger-than-life bronze statue of Hiram Walker, perched atop barrels and with plans in hand to build his empire. The statue is on the corner of Riverside Drive and Devonshire Road.

“The city of Windsor would be a shadow of itself without the indelible contributions of Hiram Walker,” said Windsor Mayor Drew Dilkens. “That’s why we are so proud to honor him with this larger-than-life statue.”

The statue was created by artists Mark and Laura Williams, who actually created the statue several years before it was unveiled on Saturday, in part due to pandemic restrictions.

The couple said they were initially nervous about the Saturday morning reveal, as they hadn’t seen the statue in four years.

“I kind of forgot what it looked like,” said Mark. “It’s almost a new piece for me.”

Mark is a well-known local artist and has created eight statues throughout the city commemorating Windsor’s history.

He said he initially sketched out what the sculpture should become, then had friend Joe Lemay pose in a set that resembled Walker’s clothes from the era, while Laura created the barrels that Walker stands on.

Pamela Morse is Walker’s great-great-granddaughter and made the journey from Grosse Point, Michigan to attend the unveiling with her husband Tony.

“We are so proud of everything he has accomplished,” Morse said.

To help document the history of the Walker family and its impact on Walkerville and present-day Windsor, Willistead Manor also unveiled a new exhibit in the mansion’s coach house.

“This beautifully designed exhibit shares the story and legacy of Hiram Walker, Edward and Mary Walker, the formation of Walkerville and the building of Willistead Manor,” said Willistead Manor CEO Douglas Sanborn. “It will serve to enhance the tour of the mansion, raise public awareness and increase how truly special Walkerville and the home is.”

Sanborn said the idea for an exhibit on the Walker family was in the works about a year before COVID-19, with the Willistead pandemic eventually shutting down Willistead for more than two years.

The HCA Mindbox team created the exhibition design with research material from the mansion’s board members and an upcoming documentary about the history of the house. Willistead Manor is open for tours on Wednesdays and Sundays through July, and the new exhibit is included in upcoming tours.

The day concluded with a memorial service at the graveside of Edward and Mary Walker, the son and daughter-in-law of Hiram Walker and the couple behind Willistead Manor, who built and lived in the couple. Willistead Manor is named after Willis Walker, Edward’s older brother who died young.

Hiram Walker and his family were also involved in Willistead Manor, the Windsor airport, the Windsor Regional Hospital Met campus, the original Essex Golf Club, schools including the Walkerville Collegiate Institute, and establishing a ferry service from Windsor to Detroit.

And partly because of the community and infrastructure Walker built, Canada’s first auto factory was established in Windsor, adjacent to Walkerville.

“He literally built the buildings and infrastructure for his companies. That’s how he built up a community’, says Dilkens.

“Art… gives us the opportunity to think about who we’ve been, where we came from, but at the same time helps us celebrate where we are now and where we’re going.”

The City and Museum Windsor are also looking for artifacts from the Windsor distillery and the history of the Prohibition to make a permanent display at Museum Windsor so if members of the public have artifacts they would like to preserve and display see, they are encouraged to contact the museum.