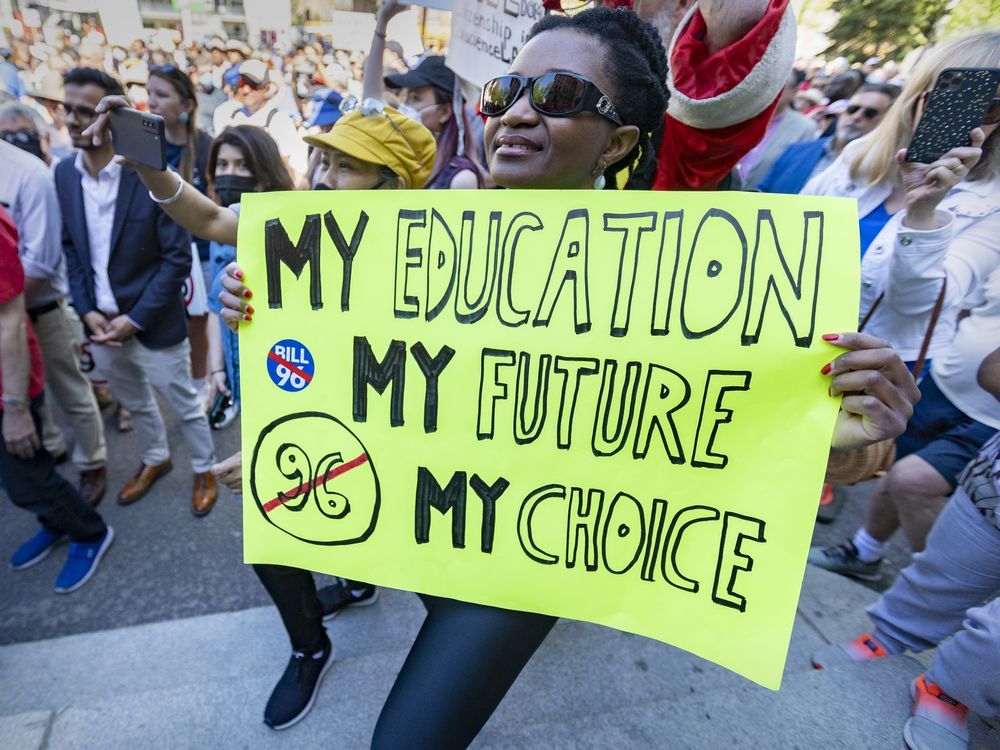 Whether English-speaking Quebecers like it or not, Bill 96 is likely to be passed into law in the National Assembly this week, perhaps as early as Tuesday.

The battle against the draconian aspects of Quebec’s most comprehensive overhaul of language law in generations is over, and little has changed to soften the blow to the rights of Anglophones and other minorities.

We are now aware of some of the practical consequences: limiting enrollment in English CEGEPs to reduce the number of French speakers and Allophones at those institutions; the application of the French-language charter to companies with 25 employees or more; the six-month period before new immigrants are denied access to public services in English.

We brace ourselves for the first time that the Office québécois de la langue française is exercising its new search and seizure powers on the basis of an anonymous complaint — while knowing its excesses won’t be as entertaining as the Pastagate absurdity of yesteryear.

But the divisive debate of the past year has also taken a wider toll, rekindling long-dormant tensions between Anglophone and Francophone Quebecers and reviving historic resentments that seemed to belong to a bygone era. As the passage of Bill 96 redefines relations between Anglophones and the state, it will usher in a new and uncertain period for Quebec’s Anglophone minority, with consequences that are political, social and existential.

Politically, many bridges have been burned.

Love has never been lost between Prime Minister François Legault’s government, the Avenir Québec coalition and the Anglophone community. But Bill 96 has heightened mistrust, especially since Legault’s reassuring words were so often at odds with his actions.

On the day the legislation was presented last spring, Legault promised the bill was “nothing against England’s Quebecers.” However, upon closer examination, it was found to contain clauses limiting English services, not to mention entrenching the collective rights of French speakers over those of individuals and minorities, while the clause notwithstanding was used to protect it all from legal challenges.

Last week, Legault countered concerns about access to health care in English, complaining about “disinformation.” Even if patients do not need an English school eligibility certificate to receive health and social services in their native language – an alarming aspect of the bill that was eventually softened with an amendment – legal experts and medical professionals, even the Collège des médecins, continue to worrying about gray areas, such as whether using a language other than French with patients will be tolerated in matters that are not life and death.

The government has tried to adopt a more conciliatory tone following a major protest against Bill 96 on May 14. Francophone Minister Simon Jolin-Barrette claims the government has “no hidden agenda” and fears of the OQLF are exaggerated. But are we panicking, or are we being gas-fired?

The fact that Legault just refused to participate in an English debate during the upcoming election campaign because French is Quebec’s only official language is disrespectful, especially when the CAQ is on the brink of gaining a significant majority.

Trust between the Anglophone community and the Quebec Liberal Party has also been shattered by Bill 96. There was a sense of betrayal after the Liberals proposed an amendment that would require more French courses in English CEGEPs, which many educators warned would doom some Anglophone students to failure. Facing a backlash, leader Dominique Anglade showed great humility by acknowledging the mistake and trying to (sort of) fix it. But it may be too late to repair the damage.

Two new parties have vowed to champion anglophone and minority rights: the Canadian Party of Quebec and Mouvement Québec. But it’s hard to see how the interests of Anglophones will be served by rivals who go after liberal support in that party’s traditional way of acting. If the vote breaks down three ways, Anglophones, allophones and other minorities could end up with less representation in the National Assembly, no more. The October elections could shake up the political landscape in Montreal and elsewhere, but perhaps not in the way many hope.

Socially, there is a deeper entrenching of the Two Solitudes, another idea that seemed passé. This is one of the more tragic consequences of Bill 96 and the societal debate surrounding it – especially for younger generations bridging languages ​​and cultures. The cap on enrollment in English CEGEPs and the addition of more French courses means less interaction between Anglophone, Francophone and Allophone students. Teachers lament the loss of this convergence of backgrounds and perspectives in their classrooms – part of what has made English colleges so vibrant.

When there is anger at Bill 96, there is also existential fear.

Members of Quebec’s English community, who have made great strides in accepting and embracing French, are once again being caricatured in some circles as “angryphones.” This negates the great diversity of Quebec’s Anglophones, who come from a range of races, beliefs and cultures, including Indigenous communities.

Anglo bashing is back in fashion. Legitimate criticism has been dismissed as predictable opposition by the world’s most spoiled minority (another figure of speech) rather than regarded as arguments with any merit.

An unfortunate and false juxtaposition has been made that Anglophones are the problem – and not English itself – as Yves Boisvert wrote in La Presse. As such, Bill 96 is unnecessarily punitive and does little to bring people together to promote French.

Once upon a time, the feeling of being second-class citizens unwelcome in our own province prompted many English speakers to pack boxes and enter the 401. Perhaps this is what the Legault government secretly wants.

However, we have the right to exist, speak English and be proud of our own culture, language and history.

So what now? What are we going to do now? What else can we do to be considered full Québécois? With Bill 96 a fait accompli, there will be a lot of soulsearching.