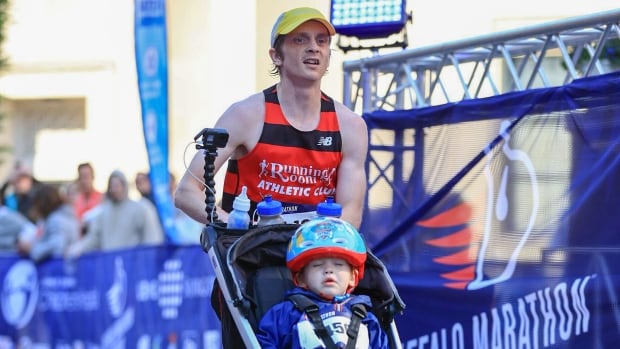 When Lucas McAneney’s wife bought him a stroller for his son Sutton, he hoped it would help his little one fall asleep.

Two years later, McAneney crossed the finish line first at the Buffalo Marathon—pushing a sleepy Sutton in that same stroller.

“It’s the year a two-year-old won the marathon, sleeping,” joked the 35-year-old who lives in Hamilton, Ont. †

McAneney said he has been competitive for most of his life, but took a break when Sutton was born.

In early 2019, McAneney said he was picking up running again and taking his son with him in a stroller. He said his wife ended up buying a decent stroller as an early Father’s Day gift. Shortly after, the pandemic struck.

“Ninety percent of my runs since the start of the pandemic have been with him. He has been my training partner the whole time,” McAneney told CBC Hamilton.

McAneney became so confident in running with Sutton that he attempted to break the Guinness World Record for fastest marathon time while pushing a stroller, a record held by Canadian Calum Neff.

Greg Weber, the marathon’s executive director, said he was confident McAneney could break the record and made an exception to the rules so that McAneney could run with the stroller.

Weber said running with a stroller would undoubtedly put McAneney at a disadvantage, even if the stroller moved well, but he said McAneney was “driving a car,” at a rate of three minutes and 38 seconds per mile.

McAneney said Sutton would point out any police cars and ambulances they passed during the flight.

McAneney did not break the record, but ran the marathon in two hours, 33 minutes and 32 seconds. He finished the race, with Sutton – who then fell asleep – 16 seconds ahead of the next runner.

“The fact that we pulled it off and won the race was the icing on the cake and made that a much better story and a better memory for Sutton and I to look back on,” he said.

Weber also pointed out that while Sutton crossed the finish line first, the rules dictate that you actually have to run the marathon, so his dad is technically the winner.

McAneney said a lot had to go right, like nice weather, packing everything Sutton needed to enjoy himself and waking him up at 5:30am without incident.

“He loved every minute of it… I couldn’t imagine it going so perfectly again,” McAneney said.

McAneney said he and Sutton will run together more, but he hopes they’ll both be on their feet next time, side by side.

Weber said he hopes it inspires others to run and spend time together.

“I think it’s a great will for a father and a son. I think everyone should look at it and say, ‘What can I do?'” Weber said.