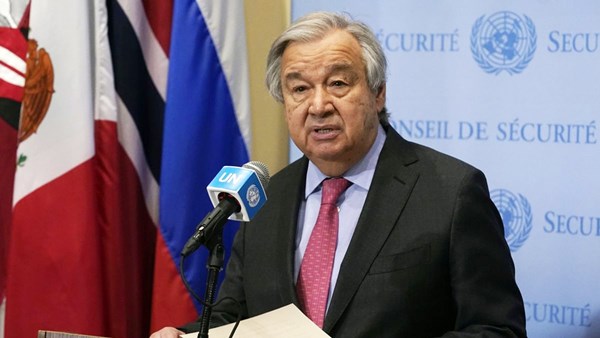 United Nations Secretary-General Antonio Guterres warned on Thursday of the dangers of Russia’s annexation of four Ukrainian regions after organizing referendums.
Guterres said Russia’s continued annexation of those areas would constitute a “dangerous escalation” that would seriously threaten the prospects for peace in the region.
“Any decision to proceed with the annexation of Donetsk, Luhansk, Kherson and Zaporizhzhya from Ukraine will have no legal value and must be condemned,” he told reporters.
“It is a dangerous escalation. This case has no place in today’s world and should not be accepted,” he stressed.
He added that the annexation “contradicts everything the international community is supposed to represent. It makes a mockery of the aims and principles of the United Nations.” The Kremlin announced that Russia would officially annex the Ukrainian regions where referendums were held.
Dmitry Peskov, a spokesman for the Russian presidency, said the annexation process would become official at a ceremony in the Kremlin. He added that the Russian president will deliver an “important” speech during the event.
“Tomorrow at 3:00 PM (12:00 GMT) a signing ceremony on the annexation of the new territories to Russia will be held in the St. George’s Hall of the Grand Kremlin Palace,” Peskov told reporters.
“Any Russian decision to move in this direction will further threaten the prospects for peace, prolong the tragic consequences for the global economy, especially for developing countries, and hinder our ability to deliver emergency aid to Ukraine and beyond,” he added. .
“It’s time to step back from the abyss,” Guterres stressed.