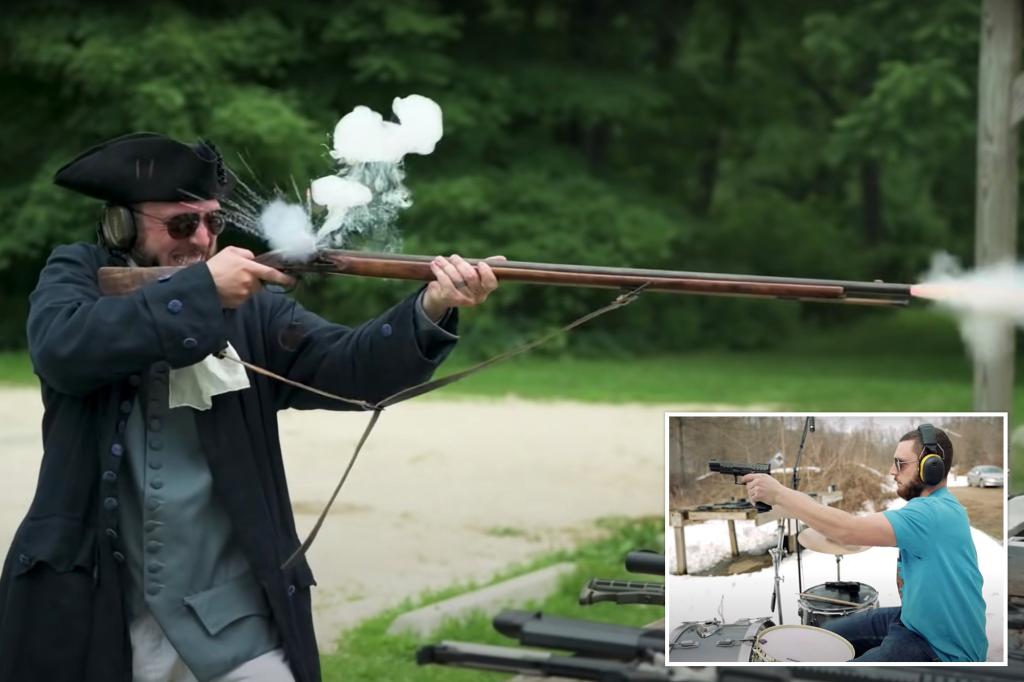 Nate Wilkinson of Ashland, Ohio, calls himself the Gun Drummer. With a toothy grin, he beats his drums and unloads thousands of pistol, machine gun and even tank shells down range, matching the beat and melody of head-banging songs with each pull of the trigger.

“It’s all adrenaline,” Wilkinson told The Post. “I try to shoot my videos in one take, so for two to four minutes, it’s just chaos.”

Wilkinson, a fan of heavy metal bands like Slipknot and Pantera, filmed his first video in 2019 as a goof, but after it received more than 2 million views on Facebook in a day, he realized he had a hit. He now has more than 200,000 YouTube subscribers but was recently pulled from TikTok, where he had 65,000 followers.

“None of these platforms are necessarily friendly to firearm content, so it’s an uphill battle,” he said. “People get afraid of firearms, in general. I think that’s why more people don’t get into them or even attack for you enjoying them.”

All his videos are safely shot at a gun range he rents out.

For Independence Day, Wilkinson donned a militia uniform and fired a musket to Metallica’s “Don’t Tread on Me.” During the holidays, he covered Mariah Carey’s “All I Want for Christmas Is You,” gleefully strolling through an armory stacked with countless AK-47s, sniper rifles and miniguns before firing off to the earworm.

A shoot can be exhausting and expensive, especially when blasting two fully-loaded machine guns from the hip.

“It probably looks a lot easier than it really is, but for a whole song, I’m going through hundreds or even thousands of rounds, so it can be really tiring,” Wilkinson said. “I typically spend about $500 on bullets for a video.”

“I’ve been getting cymbals by the pallet at this point and shipping them out in pizza boxes everyday,” he said. “I say to my wife, ‘Hey, baby, I’ve got to go shoot some cymbals,’ like it’s a job or something.”

Wilkinson fell in love with firearms at a young age and fondly remembers the day his dad bought him a Ruger 10/22 rifle.

“They’re truly engineering marvels. Guns are a very deep rabbit hole, and you can fall into it forever,” he said. “It’s also important for free people to be able to have these and know how to operate them. Evil people will always find a way to use them, so good people need to know how to use them as well.”