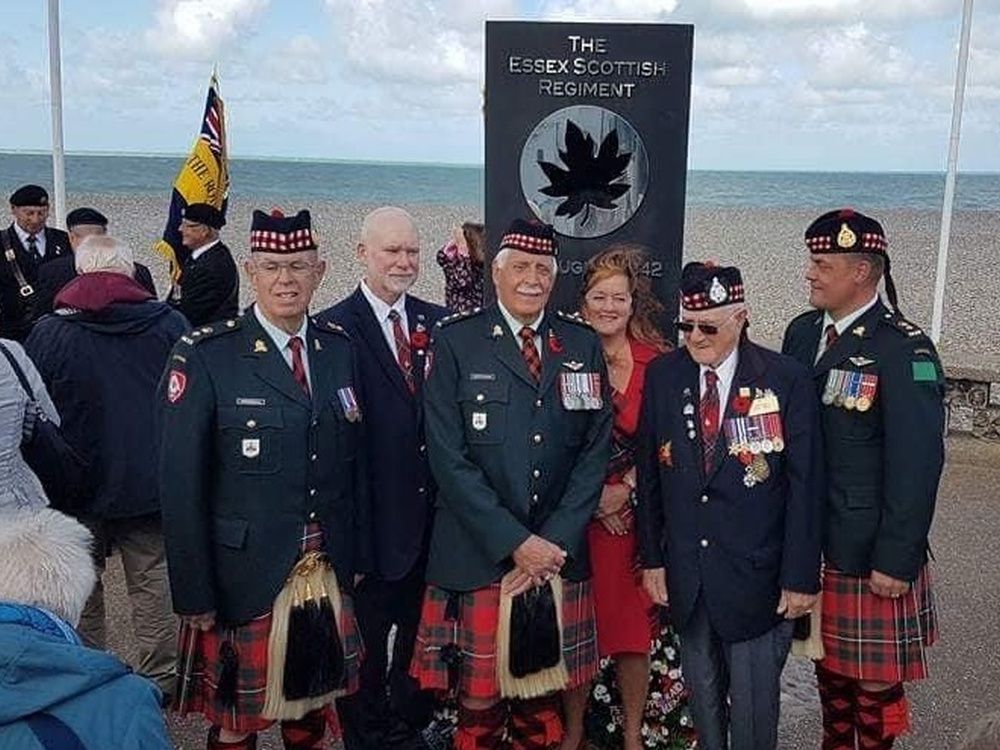 “Stones,” he whispered. “You never forget the feel and sound of these stones under your feet.”

Today marks the 80th anniversary of Operation Jubilee, the Raid on Dieppe, a pivotal moment in the history of the Essex Scottish (now Essex and Kent Scottish) and indeed, all of Canada.

If your parents and neighbors were my age, you grew up with vague memories of World War II and sad references to friends, loved ones, family who didn’t return from Dieppe, and other actions during the war.

You also grew up on trips to the Cleary Guesthouse for an ice cream sandwich, followed by a riverfront walk in the beautiful Dieppe Gardens. You never really understood the importance of that sacred ground, named after a distant place that many, if not most people, will never visit.

I knew the name Dieppe. My paternal grandmother had talked about it, my eldest brother was in the reserves with the Windsor Regiment, sharing the old armories with the Essex and Kent Scottish. My mother, a librarian, lost someone she knew in Dieppe. One day mom brought home a “chough” that she was fixing and it was about Dieppe.

You may be wondering what a “chew?”

According to Google, “chews are collections of interesting artifacts that provide information about a particular subject, period or idea, and arouse background and interest in children’s literary works.”

But it wouldn’t be for many years to come that I would meet local Essex Scottish Dieppe Veterans Howard Large, Maurice Snook, Ian MacDonald and their families; visit Dieppe, lie on the beach and look up at the cliffs and see for yourself the insurmountable obstacles faced by brave Canadian soldiers.

The fear they must have felt is unimaginable.

In 2012, I was the company sergeant major for Delta Company (a group of civilian volunteers dedicated to supporting women and men of the Essex and Kent Scottish). I was eagerly looking forward to a tour organized by Battle Honors (UK) taking part in the 70th anniversary of Dieppe commemorations with members of the Essex and Kent Scottish, former and serving members, family, friends and representatives of other regiments.

Each day of the tour, we gathered and paid tribute to the places where our soldiers had fought, captured, and died in World War I and World War II. Our understanding of everything they had sacrificed grew more real every day.

Once in Dieppe, we were assigned to our hotels and as I walked through the doors of mine, I learned that I was in the most excellent company: Dieppe veterans.

It was one of those veterans whose arm I propped up at 5 a.m. on August 19 as we stepped onto the beach to raise a glass in memory, who whispered, “Stones. You never forget the feel and sound of these stones under your feet.”

The time I spent with those incredibly brave souls are moments that will stay with me forever.

But it was the night before the toasts and commemorations at Dieppe’s beautiful and haunting cemetery that remains most memorable.

The unique layout of back-to-back headstones is not found anywhere else in Commonwealth war cemeteries. And it was in that cemetery, on the night of the wake, August 18, that a fine cloud of mist surrounded the hundreds that had gathered. It hovered and swirled above and around us and then, as fast as it came, it took off as the Essex and Kent Scottish Pipes and Drums began to play.

They were with us that night. We all felt it.

Two thousand eighty-five men were injured, captured or died on the main beach that day.

And what about the Essex Scottish? The numbers of victims of that fateful day 80 years ago are staggering. Of the 553 Essex Scottish soldiers who sailed to Dieppe, 530 were killed. Some became prisoners of war; many were killed in action, others died after the raid.

Today we commemorate those brave men and mark this solemn day in our local history. Indeed, in Canadian history, lest we forget.

“At the setting of the sun and in the morning we will remember them.”

Mary E. Baruth is the former Officer Commanding (OC) Delta Company, Essex and Kent Scottish Regiment and attended the 70th and 75th Dieppe Raid Commemorations in France. Information about the regiment’s fundraising campaign to honor the legacy of veterans can be found at www.servicesacrificeduty.ca.