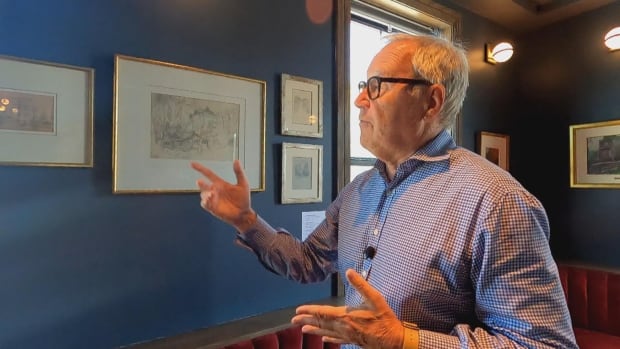 The work of some of Canada’s best-known artists is on display in Amherstburg as part of a temporary free exhibition.

The Group of Seven: Not Formed in a Day pop-up opens July 1 and runs through July 10.

It is a collaboration between the River Bookshop and Art Windsor Essex, formerly known as the Art Gallery of Windsor.

The Group of Seven were landscape painters whose most popular work dates from the 1920s to the 1930s. Members include Franklin Carmichael, Lawren Harris, and AY Jackson.

Before they found success, they were outcasts — facing an art institution that rejected their work as too commercial, explained Richard Peddie, owner of the River Bookshop.

“It’s the artists who really became the first Canadian art style, and they did it based on the Canadian landscape,” says Peddie.

The exhibit features those iconic brightly colored images, but Art Windsor Essex executive director Jennifer Matotek said it also includes some things people may not have seen before, such as printmaking, lithography, and wood engraving.

The project reflects the art gallery’s pressure to expand its reach into Essex County – something that is also reflected in the gallery’s new name.

“It’s a pretty big deal that we’re actually bringing our collection to the province in a way that we’ve never done before,” Matotek said.

The exhibition takes place in the Hole in the Wall space above River Bookshop on Richmond Street in Amherstburg. The doors are open daily from noon to 5 p.m. and the exhibition will run until July 10.