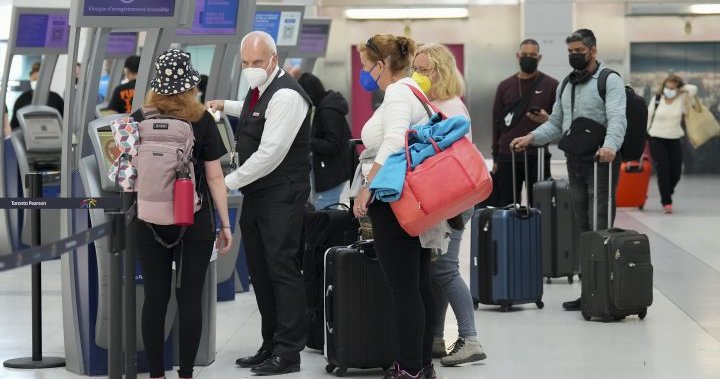 Duncan Dee, who worked for Air Canada for 15 years until 2013, including a stint as Chief Operating Officer, told Global News that security and customs delays caused “cascading delays” that prevented airlines from planning or manning their routes.

“The cause of this is really very poor preparation,” he said. “You have government agencies that are totally unprepared for what everyone else knew.”

Dee explained the carefully timed balancing act that airplanes and their crews try to run efficiently.

There are specific time slots set aside for airplanes to use gates and counters that, when it’s working, run like a well-oiled machine.

However, delays in unloading passengers at the customs hall could mean that the gates are not available for the next flight (delays it) or that the crew no longer needs the hours they need to work on their next flight has (cancellation thereof).

“The assets involved — the aircraft, the gates, the counters assigned to a specific flight — can no longer operate normally,” Dee said.

“It becomes impossible because a flight enters the gate that comes in two hours late, customs tell them they only let 10 out of the plane every 10 minutes or 50 every 30 minutes and it (prolongs) the time a plane uses the gate exponentially.”

Passengers and the Greater Toronto Airports Authority (GTAA), the agency that runs Pearson’s airport, have been complaining about bottlenecks and delays for months.

“We are seeing airports around the world experiencing delays as the industry adapts. We know that Canadian passengers are experiencing these delays at home and we understand their frustration,” a spokesman for the Department of Transport said in a statement to Global News.

Those results place Toronto in the top 10 worst delays of all major airports tracked by Flight Aware on Monday and Tuesday.

Data on the Toronto Pearson website shows that five percent of departures and six percent of arrivals were canceled on Tuesday.

In a statement to Global News, Air Canada, one of several major airlines that rely on Pearson’s airport, said operations were impacted by staffing issues at outside government providers, particularly Pearson.

“If an aircraft is held at a gate longer than expected or a flight is suddenly canceled, it could affect the schedules of ground personnel servicing the aircraft and its crews and disrupt subsequent flights,” the statement said.

“It’s not just about people going on vacation. It’s about them, but it’s also about trade and the economy and jobs and investment and reputation and that airport needs to be repaired,” Tory said on Tuesday.

The mayor’s comments came a day after former NHL player Ryan Whitney posted a candid video online describing his experience with Pearson while trying to travel to Boston.

“I’m so shocked in this place,” he said in the video, which has garnered a lot of attention on Twitter.

The Transport Minister’s cabinet said it is working to address delays “as soon as possible”.

“Transport Canada has established working groups with airports, airlines, CATSA and the relevant agencies that meet each week to find tangible solutions to improve delays in the travel process,” the statement said.

But Dee said the writing was on the wall — easing pandemic restrictions always meant 2022 would be a significantly busier travel year than 2021. He said the government was “flat-footed” over the wave of passengers.

He compared the impact of the security and customs blockade on airlines to a storm.

“This is like a thunderstorm that the airline has no control over that lasts non-stop for 65 days and the forecasters can’t tell you when it will end,” he said.

“You’re basically stuck — you can’t plan staff around it, you can’t find more planes to serve the travelers and there aren’t enough empty seats to protect people if their flight routes are disrupted.”

Mississauga Mayor Bonnie Crombie, as well as representatives from the GTAA, Tourism Mississauga and the Mississauga Board of Trade, recently said more needs to be done to ensure travelers don’t face lengthy delays.

“From staff shortages to a severe pandemic policy, the federal government must act quickly to address issues at airports,” the officials said in a statement.

They said that “short-term solutions can be put in place immediately” and would make a big difference to international travelers.

Those include removing mandatory random COVID-19 testing at airports, as well as removing “duplicate health checks and questions”.

“The past two years have been incredibly difficult for the travel and tourism industry,” said GTAA board chairman Doug Allingham.

“As travel increases and our airport returns to pre-pandemic volumes, the federal government must continue to act quickly and help resolve the issues facing air travelers.”

— with files from Global News’ Ryan Rocca and Caryn Lieberman

2:03
Long lines at Toronto Pearson Airport cause unrest among travelers

Long lines at Toronto Pearson Airport cause unrest among travelers – May 2, 2022