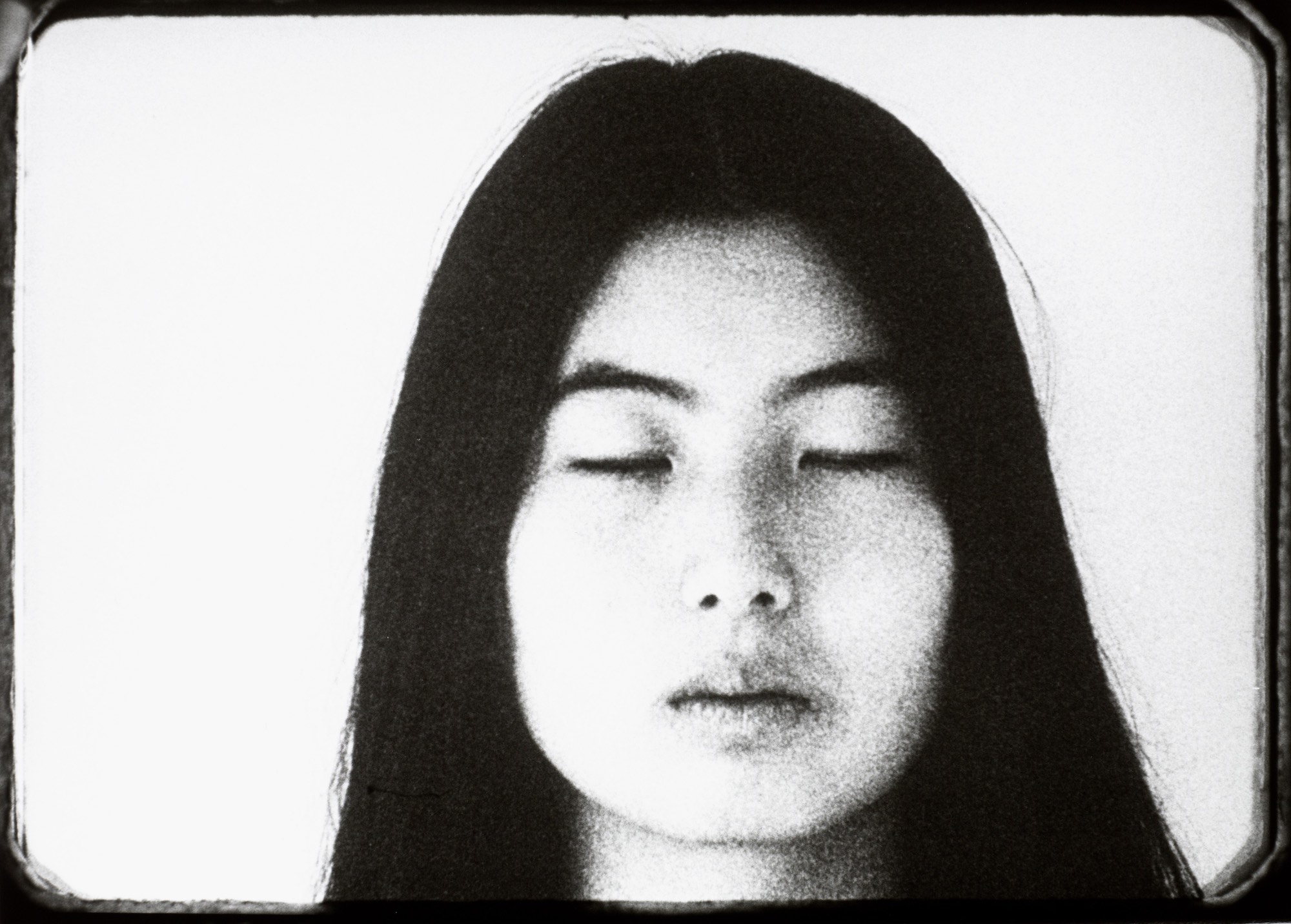 Projected on a white curtain wall, the image of a young Korean girl from “Permutations” (1976), a 10-minute black-and-white film, announces Theresa Hak Kyung Cha’s exhibition at this year’s Whitney Biennale. The diverse artworks (14 in the exhibition checklist) are carefully staged in this ‘show within the show’ in the center of Whitney’s fifth floor gallery. The tent-like space recreates the ‘environment’ that Cha designed for her performance in 1975 A BLE WAIL at the Worth Ryder Gallery at the University of California Berkeley, “a cheesecloth curtain was hung, separating the artist’s space from that of the viewer,” she wrote in her notes, where she also stated the reason for the sheathing : “In this piece , I want to be the dream of the audience.” Forty years after her tragic death at age 31, Cha’s premonition of a “dream” forms Whitney’s tribute to the artist in her “performer’s space.”

Curators David Breslin and Adrienne Edwards explain that they “organized this Biennale to reflect these precarious and makeshift times.” For an exhibition that mostly showcases emerging artists (such as Korean-American Na Mira, whose work is installed nearby), their retrospective of Cha – a highly accomplished literary artist, as well as a precursor to feminist achievement and conceptualism – reflects political sensibilities from today . The title of the biennale, Silent as it is kept, expresses the grief of three years of COVID isolation, inextricably linked to that of racial injustices in the United States. Toni Morrison’s verse”quiet when keptthere were no marigolds in the fall of 1941,” from her acclaimed book The bluest eye, refers to the silence when one secretly mourns death. Invoking poetic imagery to represent grief in Morrison’s story – her evocation of the death of a newborn (conceived by incest) – the curators’ thoughtful selection of Cha’s works in the exhibition corresponds to the general focus of the biennale for mourning. The three years since the last biennale have been particularly tough for Asian women in the United States, raising the stakes for Whitney’s representation of American art.

In a photographic loop visible from both sides of the cloth screen, the “Permutations” photos of the young girl – seen with eyes open and closed and from behind – seem to manifest Cha’s ghostly presence despite being the face. from her sister, Bernadette. Even here, the artist appears to the public as a “dream,” as she is embedded in the film’s duration: “a single frame of Cha’s own face, eyes open, both ears exposed,” as Soyoung Yoon describes in her essay for the biennial catalogue; “It’s a one-time thing that’s barely registered.” This mismatch game illustrates a common sexist and anti-Asian stereotype: All Asians look alike. All Asian women are the same. Decades have passed since the rape and murder of Theresa Hak Kyung Cha in New York, and yet the violence of Asian profiling and sexual fetishization never seems to change.

On April 13, during the second week of the biennale, a memorial exhibition hosted by stephanie mei huang opened at Eli Klein Gallery, just down the street, to pay tribute to Christina Yuna Lee, who was stalked and murdered on February 13 of this year. year . Asian hatred has unduly affected Asian women since Trump called COVID-19 the “China virus” and sparked a torrent of racist aggression and profanity. After his massacre in Atlanta on March 16, 2021, which killed eight people, including six Asian women, the killer blamed his sex-addict violence on the Asian women he fetishized (including Korean Americans Suncha Kim, Soon Chung Park, Hyun Jung Kim Grant and Yong Ae Yue).

At the biennale, the video of “The Word” (1975) questions the meaning of the term “Americanism”. The five digital color scans on a loop show still images of Cha’s T-shirts with the neologisms inscribed: “A! MER IN CAN ISM,” “AMARE…SINASM,” “A MARR CAN ISM.” If “THE WORD (Le Mot)” represents Cha’s speech acts in the context of T-shirt identity, how would she have addressed “Kung-Flu” hate speech as a locus of white power/knowledge?

The poetic significance of Cha’s life and death resonates throughout her show, expressed in photographs of the artist and her post-exile siblings from Korea in handmade artist’s books such as Presence absence (1975). Born in Busan, Cha and her family fled the approaching North Korean and Chinese forces during the 1950s war and emigrated to San Francisco in 1964. moment when student protests on behalf of Ethnic Studies would result in the first-ever Asian American Studies program. She developed the extraordinary breadth of her intellect by studying French film, psychoanalysis and language structures, and through her art of reconciling Korean kinship, memory, exile and emigration.

The video installation from 1975 Mouth to mouth (compiled in 1987 with see me, 1976, and Re Dis Appears, 1977) is a prime example, composed with images of the Korean alphabet combined with close-up movements of a mouth pronouncing the eight Hangul phonetic vowels. Cha conceptualizes the fragmentation of the ‘mother tongue’, the loss of the embodied process that every emigrant experiences in assimilating American English. The artist once wrote that her videos, films and performances explore the relationships between language structures and written and spoken material. Performance events like her 1975 blind voice – “blind voice” in French – addressed the difficulties of assimilating into another language by performing the loss of vision. The photographic documentation of the performance at the Whitney, hung on the other side of A BLE WAIL, shows Cha dressed in white, her eyes covered with a cloth marked voteand her mouth with one reading Blind. She ritually rolls out a white banner printed with the words gesture (gesture), Blind (Blind)voice (voice)without (without)against (word)without (without), and ‘I’. When language is used in oppression, in hate speech, the result is a loss of voice. Cha communicates this in connection with her displacement in the United States, but also in memory of her relatives, who were not allowed to speak Korean during the war during the Japanese occupation.

The Whitney’s rendering of her 1977 artist’s book Father mother recognizes the intimacy of her familial images in relation to her cultural texts. Interspersed with pages of Korean calligraphy, Father mother contains manipulated photocopies of photographs of Cha’s parents, reproductions of her mother that were eventually used as illustrations in Cha’s literary work Dictation, released two months after her death in 1982. Now on the 40th anniversary of publication, the images act as a narrative track in her commemorative project, prophesied by Cha as a reminder of “names, events and histories of real persons, individual characters in history and other fictional characters embodied in nine female voices.”

Cha planned to write a historical novel alongside her unfinished film white dust from Mongolia, presented as a video installation in the Whitney exhibit. Taken by her brother James in 1980, who returned to Korea with her for three months, the footage captures images of everyday life in Seoul: ubiquitous ceramic pots on rooftops, food market stalls, amusement park rides, and comings and goings. at the train station. In her statement for White substance, she stated that she “wanted to bring out in this book all the historical elements to reduce both the physical geographical distance and the psychological distance of the Asian people from other ethnic cultures.” Her grandparents were Koreans who were exiled to Manchuria during the Japanese occupation. Their return to their homeland much later during World War II marked them as Manchurian Koreans of ethnic difference. In her postdoctoral prospectus, she explained how film, performance and text could express exile and return: “My work so far has in a sense been a series of metaphors for return, going back to a lost time and space, always in the imaginary […] the realization of the imprint, the inscription etched from the experience of leaving.” With Cha’s death, an important voice was lost in expressing the personal impact of displacement in the history of all Asian Americans.

In an interview on Whitney’s website, Breslin and Edwards explained their rationale for including works like Cha’s in the biennale: “why can’t there be dead performers” in the show “if their ideas are more alive than ever…the spirit of them is there still art?” Na Mira’s ideas are direct descendants of Cha’s Night Vision (Red as never been) (2022) will be presented at the biennale as a three-channel infrared video installation. The artist traveled to the demilitarized zone between North and South Korea to record the performance in the dark of the night. Continuing the matriarchal efforts of “my great-grandmother, who lived as a shaman during the Japanese occupation when the practice was banned,” Mira performs the animal gestures of the tiger-shaman’s spirit, evoking the body’s tracks in the ritual of belonging to Korean nationalism.

Cha’s imprint can be felt in Mira’s other version of ‘metaphors for the return, going back to a lost time’, etched from the poetic experience of the departure. Cha’s influential body of work at the biennale is central to the curators’ goal “to map in an intergenerational way the artists who question identity… Her desire to be the ‘dream’ to the public now foreshadows her perpetuation.” its far-reaching vision of identity is renewed here.

Theresa Has Kyung Chao will be presented as part of the 2022 Whitney Biennale, Silent as it is keptat the Whitney Museum of American Art (99 Gansevoort Street, Meatpacking District, Manhattan), and runs through September 5. The biennale was curated by David Breslin and Adrienne Edwards.