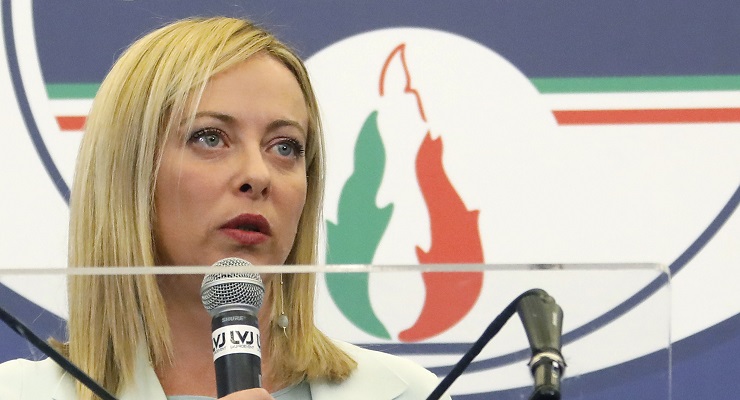 Well, if nothing else, the Italian elections are making up for the week of new boredom created by the death of Queen Elizabeth II. The victory of the Brothers of Italy/Fratelli d’Italia (FDI), with a staggering 26% of the vote, has made leader Giorgia Meloni the presumed prime minister. She becomes Italy’s first elected Prime Minister in 14 years, the rest are Technocrats appointed by the President in agreements with the European Union to continue the endless and largely fruitless process of restructuring the country’s sclerotic institutions and economy and within reach of Germany, France and the Benelux countries.

The most recent government included all major parties – except the FDI, which polled 4% at the time. As your correspondent noted two weeks ago, the FDI gained legitimacy through its anti-political stance, while all other parties were plagued with failures.

Save 50% when you join Oh dear today as a year member.

That brings the right vote to 43%, the left to 23%. Split the 5SM down the middle, and the right gets a majority, while the left barely gets 30%. It’s a devilish result, and it gets worse when you look at votes per class. Employees (“operai” in the linked chart) gave the largest votes per group, at 35%, and only 11% of them voted for the PD. This is essentially the same story as in the US and elsewhere: workers have resolutely left the left. Their active preference for FDI over the rest of the right and the 5SM belies the idea that the FDI vote is just shuffled right-wing votes. The shift is real (though also slow – turnout was extra low in working-class and low-income groups).

Meloni’s imminent victory was not much commented on before the election. Now everyone is doing their best to pay tribute to Catalonia and the Spanish Civil War. The fascists are at the gates! They’re in town! Are they? Well…but also no. The desire to simply label Meloni and the FDI’s complex mix of politics as fascist is a desire to have a clearly defined enemy and to rekindle the scattered and defeated liberal and progressive confidence. But it really shows that we need to re-examine the history of the 20th century, the ready-made categories it has given us, and the need to rethink them in a way that’s pretty much tap-dancing through a minefield.

Meloni’s FDI is a successor to the Italian Social Movement (MSI), the party founded by fascists and others after World War II. The MSI rejected fascism’s idea of ​​arbitrary state violence as an expression of historical will, retaining its foundation, the idea of ​​organic corporatism – the anti-liberal idea that a society is a mix of defined groups, hitherto united by tradition. , now, in modernity, by state action.

Liberalism, in the corporatist explanation, leads to meaninglessness and anomie. Only through group membership, and that group’s membership of the nation, does the individual’s life have meaning. Many of the actual fascists went to various illegal and shadowy groups and would erupt into “black hand” political violence in the 1970s, probably aided by elements of the Italian state as part of a “strategy of tension” (their worst atrocities). – such as the bombing of Bologna train station in 1980 – are now often mistakenly remembered as the actions of the Red Brigade).

The leadership of the MSI was precise, rational, democratic, led by the efficient Gianfranco Fini, and its membership was crazier than an almond panettone, stuffed with occultists and reactionaries. They followed the philosophies of Julius Evola and the ‘traditionalist’ René Guénon who believed that modernity would eventually come to a crisis. Until then, Evola advised “ride the tiger” and be ready to take over when the tiger, er, falls apart. Guénon’s Anti-Modern Philosophy in the 1945s The reign of quantity and the signs of the times was very influential – and very anti-Semitic.

You can see this stuff bubbling up in Meloni’s speech, captured on YouTube, about consumerism, slavery and the control of global financial speculators. You could call it the “anti-capitalism of fools”, I guess, based on shadowy notions of conspiracy to explain a global process. But it’s a global process that has had its champions and agents, and in a stagnant country like Italy, whose EU transnationalism has helped create a backwater, it has a lot of appeal now that every other explanation or approach has been exhausted. . 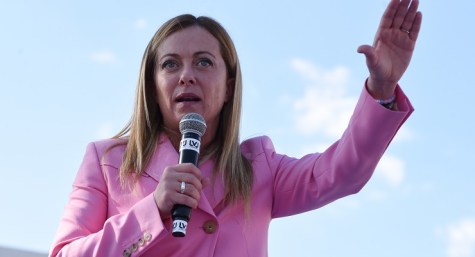 So when Meloni’s party suspends democracy, throws thousands in jail and sends death squads, it will be agreed that fascism has returned. Until then, it can best be seen as a form of neo-reaction, which has held wide appeal on a variety of economic, cultural and political grounds.

But here is the real difficulty. The generalization of the term ‘fascism’ has hindered our thinking about its continuity and its place in the political spectrum. Mussolini’s fascism was seen at the time as simply a violent but acceptable answer to the problems of organizing post-imperial Europe. Beneath his violent swagger lay the imposition of a technocracy to accelerate the national integration that the UK and France had achieved with capitalism and a consequent state. People from right and left lined up to praise Mussolini as he got the land to work, built new cities (and my god, I’m sorry, but his train stations are fantastic), drained malaria swamps, etc.

That history has changed in memory because in 1938 he conformed fascism to Hitler’s Nazism, a movement that was really outside the left-right political dialogue. Anti-Semitic laws were enacted in a country where the fascist party was full of Jews and whose navy trained hundreds of “revisionist Zionist” armed squadrons in the organization that is the precursor to Likud. When Mussolini made an alliance with Hitler in World War II, it was over. Nazism, with its genocidal extermination, became what fascism was.

This is not to soften the idea of ​​what Italian fascism was, but to show how much of it survives elsewhere. First, there were more violent things than fascism, and historical memory is used to cover that up. For a long time, the left used this to avoid the violence of Stalinism and Leninist Bolshevism. Now the liberal right is using it to obscure what everyone understood at the time: that the empires of Britain, France and other European powers have provoked violence and racism on a global scale, under the guise of parliamentary democracy at home, to create Italian fascism. look like a pie.

Violent repression in Algeria, the Bengal famine of 1943, the partition of India-Pakistan, the concentration camps of British Kenya—all this diminishes everything Mussolini’s fascism did (except his own imperial adventures in Africa) until he joined the Axis powers. But until the past decade or so, this was all obscured by the memory of World War II and fascism’s identification with the Axis powers. But if you’re wondering why people in the 1930s weren’t able to get so morally trained in fascism—even when they started fighting it—as we do now, it’s because they were in a world where it was a violent player was among many.

How about now? Well, using the term “fascism” for mere state authoritarianism evokes the ’60s/’70s style of Marcuse and Deleuze/Guattari, for whom democracy itself is fascism, and ultimately the happy family, stable subjectivity, etc. But at the same time, there are elements in modern societies that should be mentioned as bordering on the fascist, in their use of aestheticized violence and state power, combined with corporatism.

Israel today is the closest regime to fascist, the revisionist-fascist heritage that emerges during its long occupation, its allegiance to the Jewish state, the pared-down brutality of its internal apartheid pass system, the protected vigilance of settlers, the steady demolition of Palestinian neighborhoods under false property laws, and the style of the IDF in their cool black uniforms as they beat up Arab children in rags in front of the cameras of the world.

But also look at something like McGowan’s Western Australian government. While the Andrews administration can be described as purely “authoritarian business,” the McGowan administration — with its black children in adult prisons, its new and distinctive indefinite detention laws targeting suspects with a string of minor convictions in high-profile crimes black offender rate – is really on the fringe of the fascist, and you have to apply the word to that, to make clear the horrors of what’s going on. Same with the carceral regimes of the US. 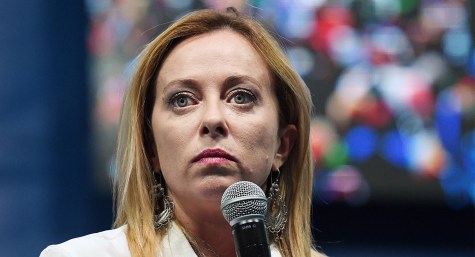 You also have to look at where the violence really lies. Nothing will truly match the toll of death and misery of decades of the global neoliberal “Washington consensus” in its various forms, which continues today. Yes, not the radical evils of Nazism or Stalinism, but just the quiet, everyday destruction of the possibility of health care, education and development, ten after ten years in vast swathes of the global south.

Which brings us to an interesting point in the hail of horror aimed at Meloni and her victory. The new argument seems to be that because it is both harmful and cult-like, we must agree that any discussion of global consumerism and financialization is anti-Semitic, that any idea of ​​boundaries and the social centrality of the family is fascist. This is not anti-fascism. This is the progressivism of elite sections of the knowledge class who make peace with neoliberalism and make an alliance against all those who want an anti-globalism that the left has failed to offer.

That will end in predictable and obvious disaster. By shouting “fascism” against anything people want to protect, they will eventually simply shrug their shoulders and say, “Okay, I’m a fascist – so what?” It will thus restore the broken continuity with fascism as it was, and the movement will become mass again. Fascinating fascism, the eternal return of the oppressed, a new violent history, blond but with the brown roots visible.

Is history repeating itself in Europe, yes worldwide? Let us know your thoughts by writing to [email protected] Please provide your full name to be considered for publication. We reserve the right to edit for length and clarity.

Crikey is news for readers who can handle the truth.

We have been amazed at the support we have received from around the world in recent weeks – and thank you for contributing to our defense fund.

In case you wanted to subscribe, we will keep the 50% discount on for a little longer.