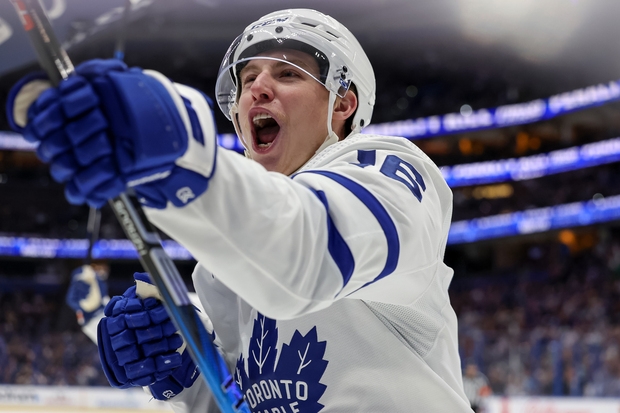 DALLAS – The next step for Mitch Marner to break a Maple Leafs record from Doug Gilmour.

Setting a Toronto franchise mark for most consecutive games with a point at 19 on Saturday night in Tampa against the Lightning, Marner took another step toward another milestone, though this one is a bit more obscure.

Marner has scored at least one point in 10 consecutive road games, two short of tying Gilmour’s team record during the 1993–94 season.

“I had no idea[of that mark],” Gilmour said with a laugh on Sunday afternoon during a telephone interview with the Toronto sun.

The fact is, Gilmour won’t be the least bit surprised if Marner runs his point streak to 20 games when the Leafs play the Dallas Stars on Tuesday night before going home for three games. The Leafs’ record of 18 consecutive games with at least one point, set by Darryl Sittler in 1977-78 and tied by Eddie Olczyk in 1989-90, was lost when Marner shorthanded against the Lightning.

Marner has nine goals and 17 assists during his run.

“If you have those skills and talents, I don’t think you’re successful without a work ethic,” Gilmour said. “And he is there, 100%. You can see how happy the team was when he broke it. That’s what it’s all about, that’s what a team is all about.”

Gilmour is, rightly so, as impressed with Marner’s full play as he is with the consistency of 19 games.

“His name should be there for the Selke, and it’s early in the season, I get it, don’t fast forward it or anything, but he’s that good,” said Gilmour. “You put him there and he’s going to find a way to steal a puck, or make a game and that’s his creativity, but also the skill, the way he sees the game.

“Some guys are different, and he’s one of those guys. He’s proven that time and time again.”

Gilmour watched on TV as Marner and David Kampf wreaked havoc deep in Saturday’s Lightning end early in the second period, forcing Tampa to make several blunders before Kampf put Marner in front of goal. Not long after, Gilmour texted Marner congratulating the latter on enshrining his name in the team’s record book.

Gilmour was not convinced that his team’s scoring record will not be broken.

“The most important thing with the kids is staying healthy,” Gilmour said. “And then you might get that chance. Records are made to be broken, I know that’s a cliché. But you don’t go into a season thinking you want to break a record. It’s not like that. You want to win as a team and (the Leafs) are an exceptional team. They are in a great position.”

While there was nothing to indicate an injury to a forward coming out of the game in Tampa, the Leafs recalled forward Semyon Der-Arguchintsev from the Toronto Marlies on Sunday. A third-round pick from the Leafs in 2018, Der-Arguchintsev has 18 points (six goals and 12 assists) in 20 games for the Marlies this season and has yet to play a game in the NHL. We’ll have a better idea of ​​the Leafs’ plans in practice on Monday, after a day off from the team… Coach Sheldon Keefe doesn’t shrug at the six points lost in the Leafs’ six consecutive losses. After beating Dallas in overtime at home on October 20, the Leafs have not won in overtime. “It’s important, because it affects the standings,” said Keefe. “(Winning in) overtime makes a difference.” … Marner had good things to say about Kampf’s pre-match spirit, something that emerged after Kampf fed Marner for the goal and record point. “His effort all over the ice, defensive, offensive, neutral zone, he’s constantly above people,” said Marner. “He’s in the right place at the right time to get pucks in good places. That’s something I noticed when I was on the (punishment) murder with him. He’s in places where he gives our defense easy outs to play.