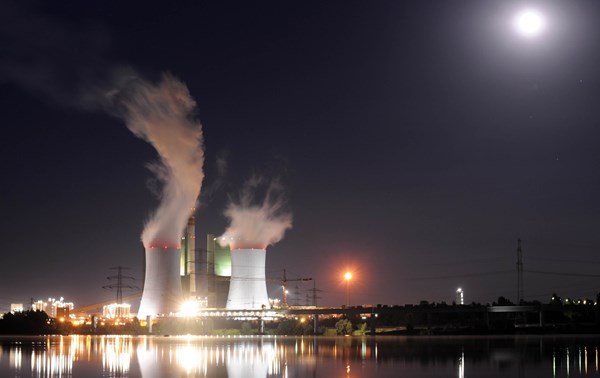 Berlin (AFP)
Germany took emergency measures on Sunday to secure its gas supply in the face of a decline in Russian supplies, including increased use of coal, the most polluting energy source. “To reduce gas consumption, less gas must be used. To generate electricity, according to the Ministry of Economic Affairs, more coal-fired power stations are used.
The decision marks a sea change for this coalition government, which has pledged to phase out coal by 2030.
“It’s bittersweet, but necessary to reduce gas consumption,” Economy and Climate Minister Robert Habeck said in a statement. His party had made the rapid removal of coal a priority and noted that a law on the matter would be passed by early summer.
Specifically, the government will allow the use of “backup” coal-fired power plants currently in operation as a last resort.
At the same time, he stressed that the use of coal for power generation is a “temporary” measure in light of the “deteriorating” situation in the gas market.
This move is a response by the German government to the announcements of the Russian company “Gazprom” to reduce gas transports through the Nord Stream pipeline, against the background of the confrontation between Western countries and Russia in the context of the war in Ukraine. .
Under the pretext of a technical problem, the group reduced its shipments by 40% and then by 33%.
This decision had a major impact on several European countries, notably Germany, Italy and France.
For Berlin, which still imports 35% of its gas needs from Russia, compared to 55% before the war, the situation is “serious” according to Habek.
“We should have no illusions, we are in a confrontation with Putin,” he noted.
The cabinet also wants to focus on energy saving, and “every kilowatt counts”, according to the minister.
In mid-June, it launched a large-scale campaign targeting the general public and business.
With the emergency measures introduced on Sunday, Berlin has taken it to the next level: a system of “auctions” will be set up for gas-consuming industrialists.
As part of a procedure similar to the bidding process, the state will award a reward to companies that promise the greatest energy savings.
The industrialists praised this mechanism.

“This allows the reduction to be targeted where the damage is less severe,” said the Mechanical Engineering Industry Association (VDMA) in a statement on Sunday. “We must do everything we can to reduce our consumption. The industrial sector is an important factor,” Habek said.
This week, the minister even threatened to legalize users and businesses, citing the idea of ​​”taking other legislative measures to save money” if “storage quantities are not increased”.
On Sunday, the minister emphasized that “security of supply is guaranteed” for the time being.
The tanks are currently at 56 percent of their maximum capacity, a level “above the average of recent years”, said the minister, who said: “We must do our best to store as much gas as possible in the summer and autumn. must be full for the winter This is the absolute priority.” “.
As part of the measures announced on Sunday, the government called the allocation of new credits from the General Bank “KVW” to the main body responsible for purchasing gas in Germany, “Trading Hub Europe”, to ensure that the gas tanks in the country.
In late April, the government passed a law requiring tank owners to have a minimum capacity of 90% by early December, under penalty of confiscation.
Since the start of the war in Ukraine on February 24, Germany has been looking for new sources of supply, especially liquefied gas from the US or Qatar.