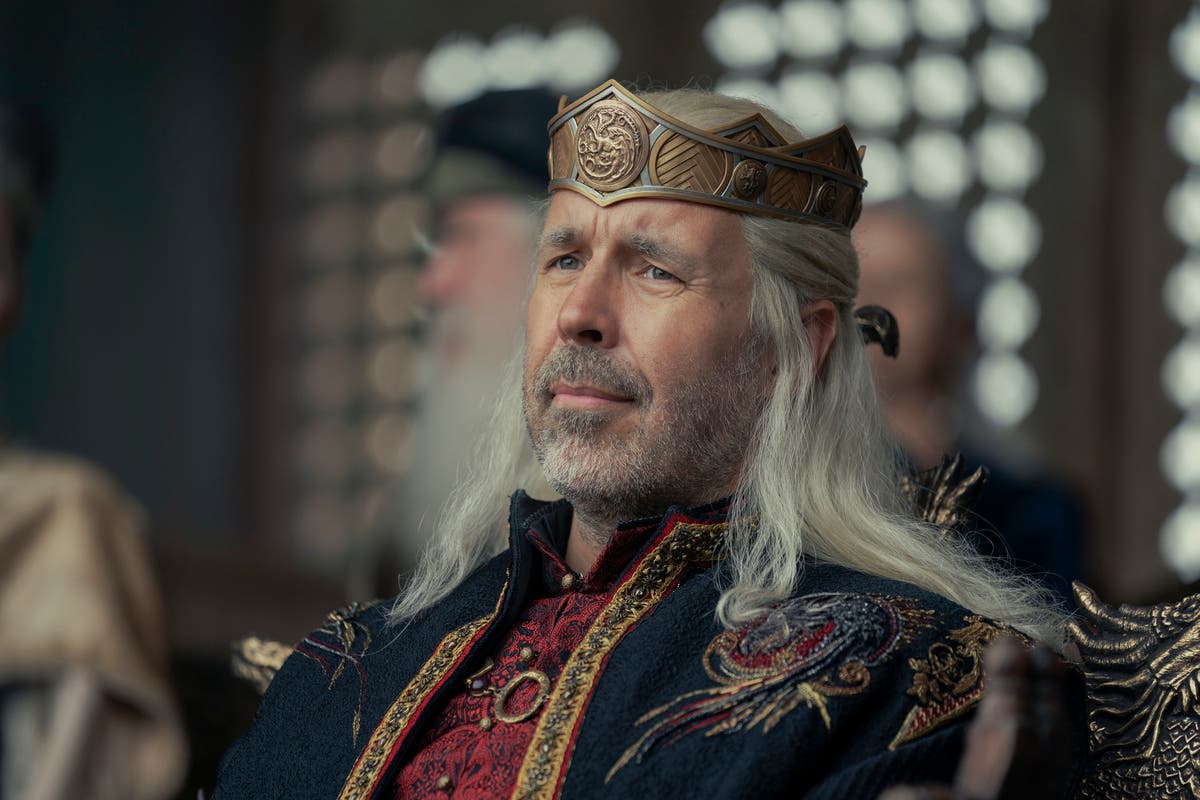 The fantasy author behind HBOs Game of Thrones and the spin-off prequel series appeared on The Late Show with Stephen Colbert to discuss his new illustrated book, The Rise of the Dragon: A History of the Targaryen Dynasty (Volume One).

During the interview, he talked about the artists who helped realize the scenes he imagined in his books.

When Colbert showed the public a portrait of the Iron Throne, it was revealed that Martin originally envisioned the legendary royal seat to be much larger than the version we see in Game of Thrones or House of the Dragon.

“It is!” replied Martin. ‘That is how it is supposed to be. Many of the kings cut themselves on it and sometimes it gets infected. The original Iron Throne in the books is very tall, and the king sits above it and he is about 10, 15 feet above everyone, looking down on the people.

During the first episodes of House of the Dragon season one shows that King Viserys’ (Paddy Considine)’s health is deteriorating, but the exact nature of his condition has never been confirmed.

However, fans eventually concluded that he likely suffered from a condition akin to “necrotizing fasciitis”, which can lead to black blisters on the skin, according to the NHS.

In episode one, Viserys mentions that he received a “small share of sitting on the throne”.

“I don’t remember anything in Fire + Blood or WoIaF. First I thought of a staph infection, then necrotizing fasciitis, but are they both moving so slowly?”

Martin’s comment on infections seems to confirm this theory.

“And [the Iron Throne] is made by blacksmiths, it’s not pretty, it’s not symmetrical, it’s full of hundreds and hundreds of swords, but when we started making Game of Thrones… we didn’t have a high enough ceiling to get it in,” he said of the throne design in the series.

Earlier this year, during an interview with The independentMartin spoke of the “magic” experience when he first saw his novels come to life on a TV set.

“It was magical,” said the author of his first visit to the set of Game of Thrones in 2010. “It was like: here are my characters, they’ve come to life. They say the things they said. The scene is pretty much as I imagined it when I wrote it. There is no such thing.”

Martin has also revealed that he has about “three quarters” of his highly anticipated and long-delayed book, The winds of winter.

The final of House of the Dragon season one aired earlier this week and fans spotted a disturbing detail in a standout scene.

The Independent’s critic Amanda Whiting has also experienced what showrunners got right (and very wrong) over the past 10 episodes.