At the Metro Court, Harmony tells Alexis to live a little and that one drink won’t kill her. Alexis pushes the drink away and tells the bartender to close her friend’s account and put it on her bill. Alexis asks Harmony what’s wrong with her because it can’t be that bad. Harmony remembers Brendan’s murder and has a panic attack. Carly approaches and asks if everything is okay? Alexis explains that Harmony has been served too much. Carly takes her keys and offers to give her a room or call Willow, which only further upsets Harmony.

Sam arrives and asks her mother what is going on. Alexis explains to her that it was the day of hell and she will tell her later, but she has to take Harmony home. Harmony grabs her bag and says to Carly, “I don’t think I’ll get that job.” Alexis drags her outside.

Carly asks Sam if she’s okay, but Sam isn’t and doesn’t trust Harmony. Carly changes the subject and apologizes for causing trouble for her and Dante. But ever since Sam saw the email, she asks if there was anything that could help Trina? Sam reveals she hasn’t had time to read it, but knows that the ADA thinks she has enough evidence to imprison Trina. Sam and Carly decide to go outside and drop off Harmony’s car at Alexis. 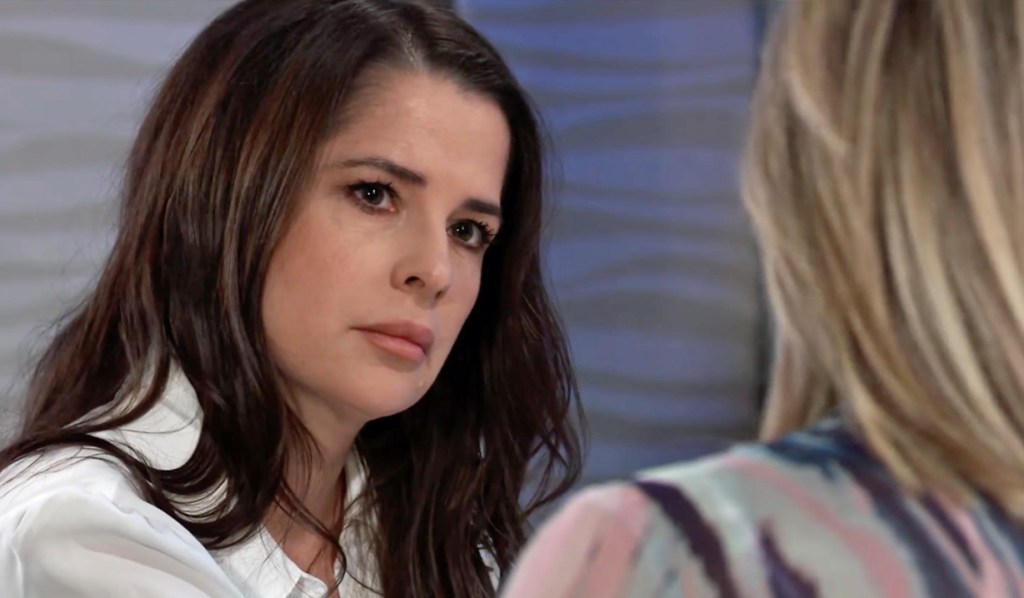 At Kelly’s, Joss can’t believe Cam is defending Spencer. Spencer arrives when Cam explains that if Joss knew what Spencer was doing, she would side with him too. Spencer yells, “That’s enough!” Cam agrees, saying that if Spencer doesn’t tell them, he will. Spencer interrupts him and says they need to know something. Rory enters before Spencer can say anything, and Trina jokingly asks if he’s following her. He just notices that it’s been a long day and he’s just getting coffee. 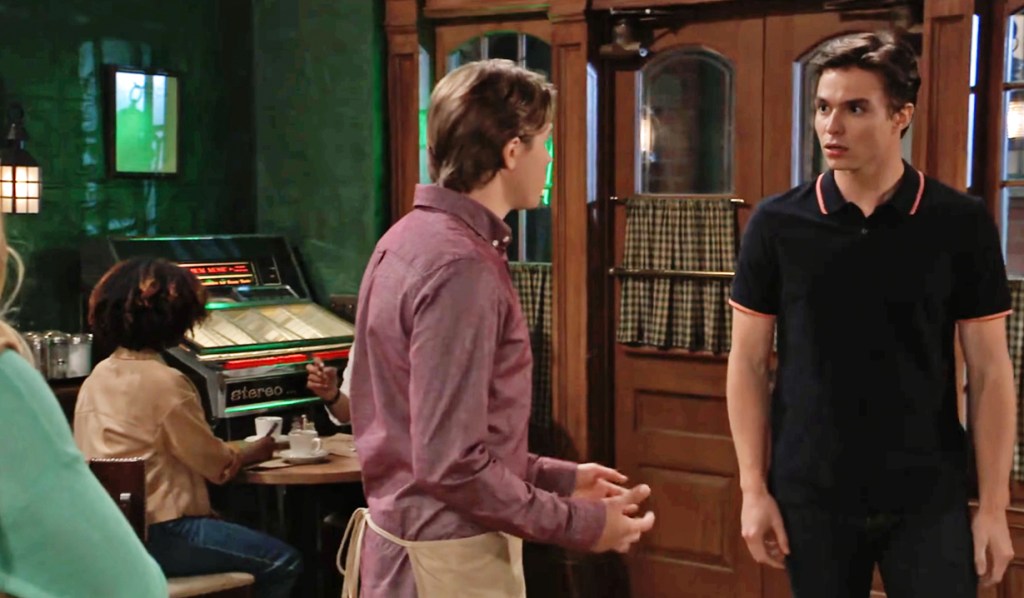 Spencer explains that he told Cam that he wanted to believe Trina because he knows that Joss and Trina are friends. However, he wonders if Joss and Cam had Trina made the video to frame Esme. Cam calls Spencer an asshole and beats him. Rory approaches and tells Cam that he has been arrested and cuffs him. Joss and Trina try to defend Cam by explaining that he was provoked. Spencer demands that Rory let Cam go so they can fix this, but Rory refuses. Spencer loses his cool, tells Rory to take a break because he’s Spencer Cassadine, and accidentally turns around and slaps him in the face. He quickly apologizes, but Rory places Spencer under arrest. Joss calls Diane and Trina begs Rory to release Cam and Spencer because they didn’t mean to cause any trouble. Rory refuses and escorts the boys outside. 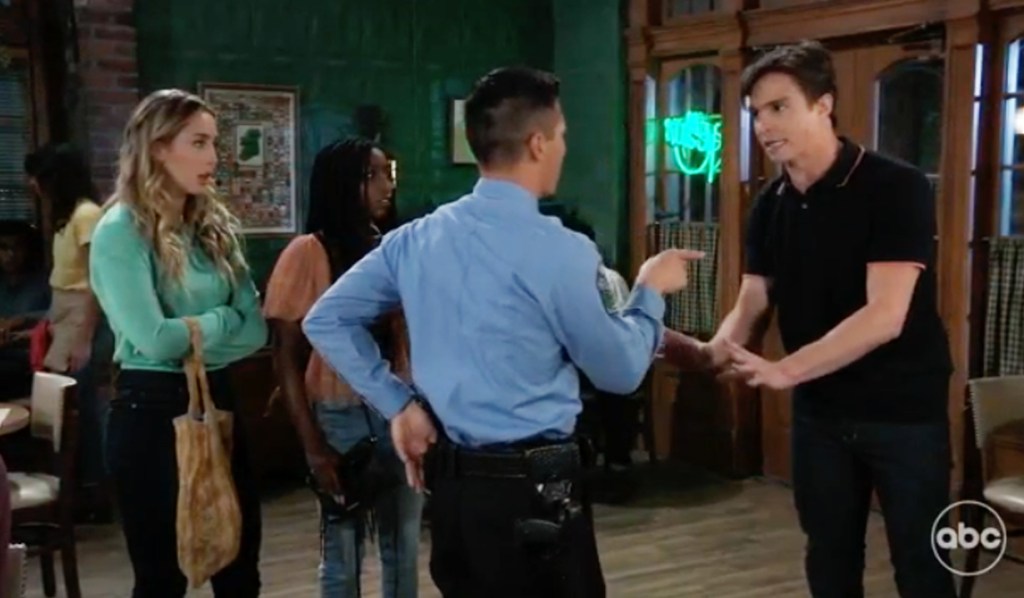 At Wyndemere, Esme learns from Nikolas, who is downing drinks, that Ava has canceled the vow renewal. He says Ava doesn’t trust him now. Esme understands that she and Spencer are still dealing with trust issues over the sex tape. Esme whines that Cam and Joss refuse to accept that Trina made the video, and it’s easier to blame her. Nikolas says they are not alone and reveals that Jordan came by and asked questions about Esme. However, he had the staff tell her that Esme wouldn’t speak without a lawyer, and they sent her on her way. Esme thinks Jordan would much rather build a case against her than Trina. She can’t stand the fact that Spencer and Nikolas can turn on her. Nikolas assures her that won’t happen. 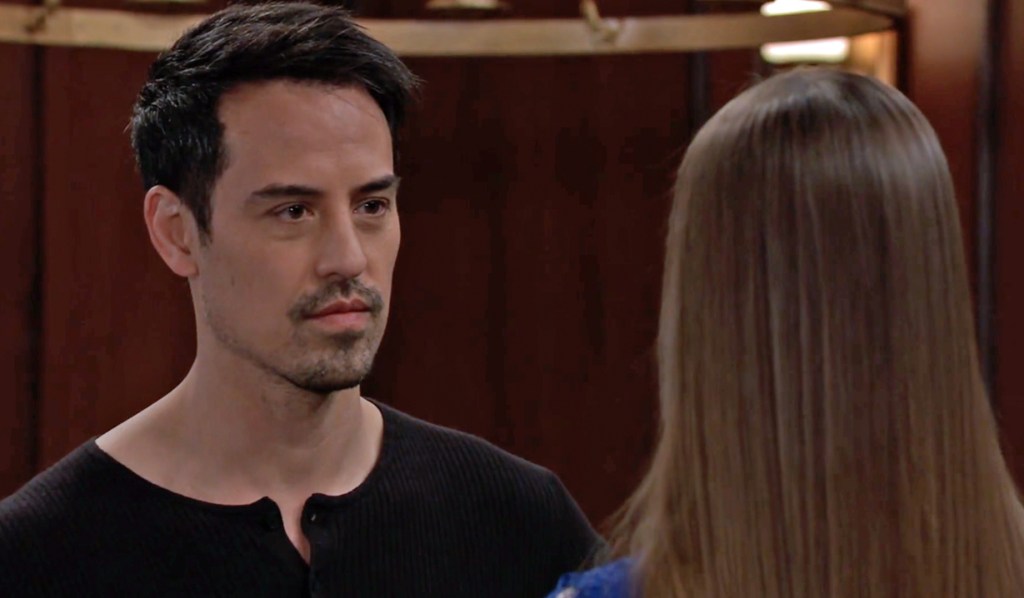 Esme takes Nikolas’ hand and puts it on her cheek and thanks him. He pulls back and she says that Spencer is still a kid, and his emotions go back and forth, unlike his father. Nikolas agrees that Spencer needs to grow, but he hasn’t forgotten what Esme is capable of either. Esme tells Nikolas to send her back to the mainland to work it out with Ava, but he refuses. She says that if he and Ava don’t want to do something about their relationship, she will. He puts his hands on her shoulders and won’t let her go and puts himself back on Sonny’s radar. Esme agrees to stay if he insists. 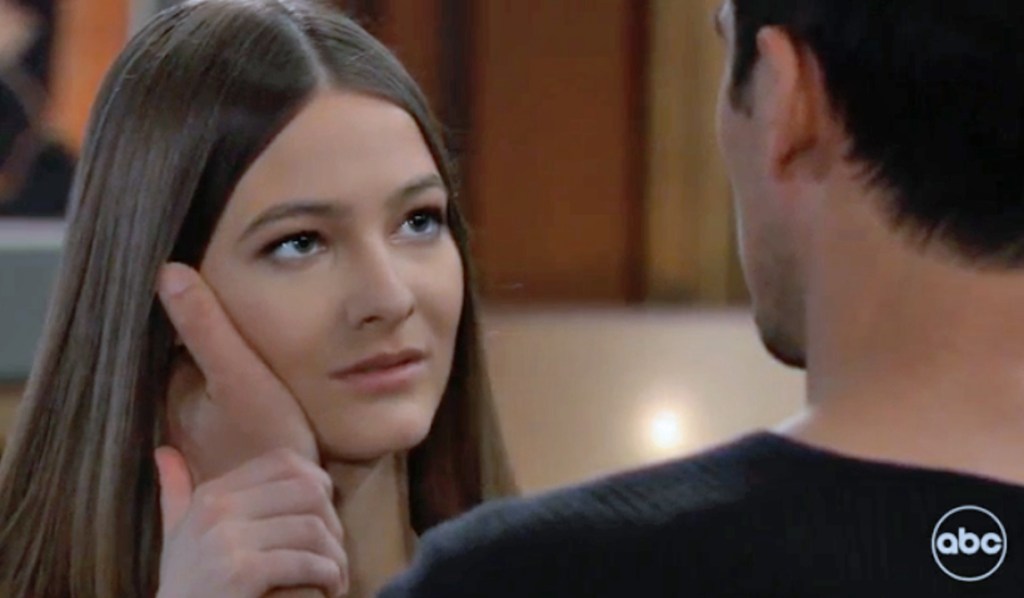 Nina and Ava meet at the Port Charles Grill. Nina tells her she submitted the papers to Wiley for a visit and says, “Michael, Willow and Carly, damn it!” Ava asks what Sonny thinks about this? 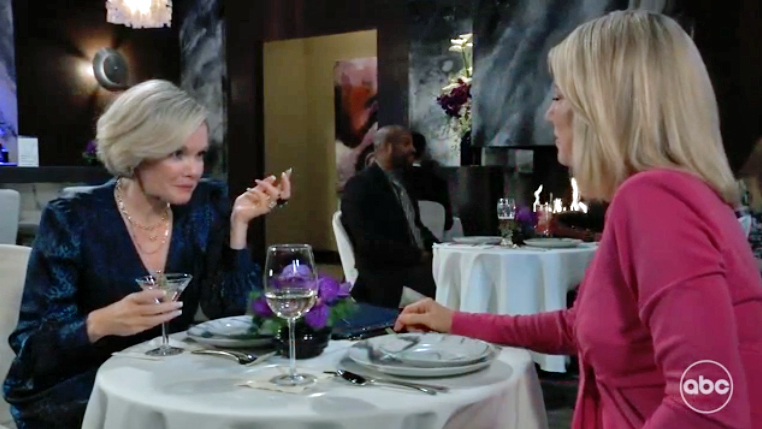 Sonny comes in on the phone and ends his call after making some arrangements. Laura approaches him and asks if everything is okay? They grab a table and Laura wants to know about the robbery at Charlie’s. Sonny explains that they were just a few local crooks, and they’re not going to mess with anyone anymore. Laura wishes she could say the same about who killed Luke. She reveals that Jennifer Smith has been arrested for his murder, which Sonny finds hard to believe. Laura thinks Victor is involved, and asks Sonny if his friend Brick hears anything… Sonny promises she’ll be the first to hear about it. 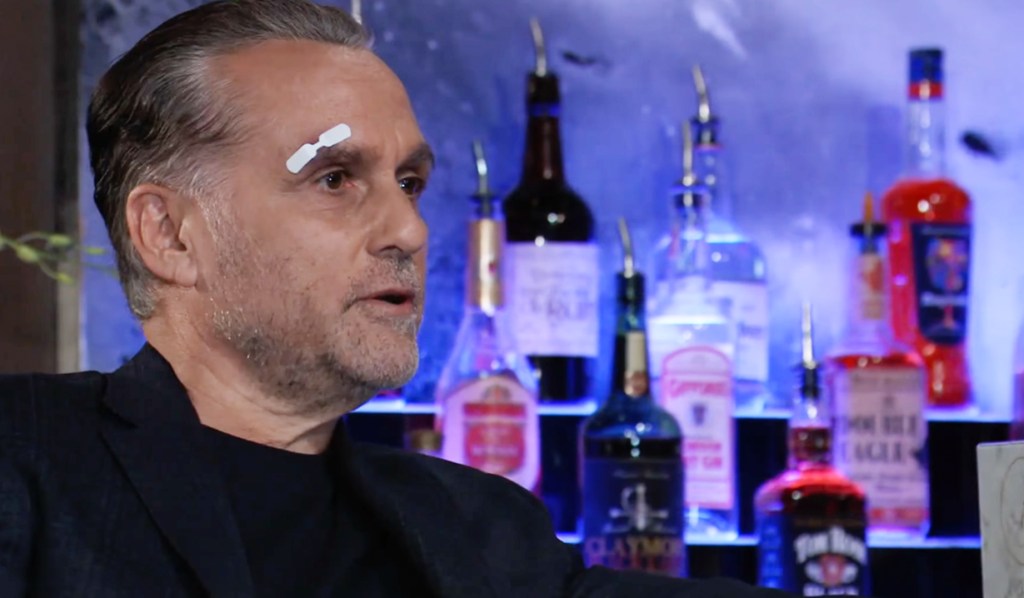 Laura brings up the fact that Spencer moved back to Wyndemere with Esme thanks to Sonny. Sonny explains that they were just having a chat, and what Esme did cannot go unchallenged. Laura feels they should trust the justice system and points out that if anything happens to Esme, he will be the number one suspect. Sonny promises not to touch a hair on Esme’s head, even if she is found guilty. 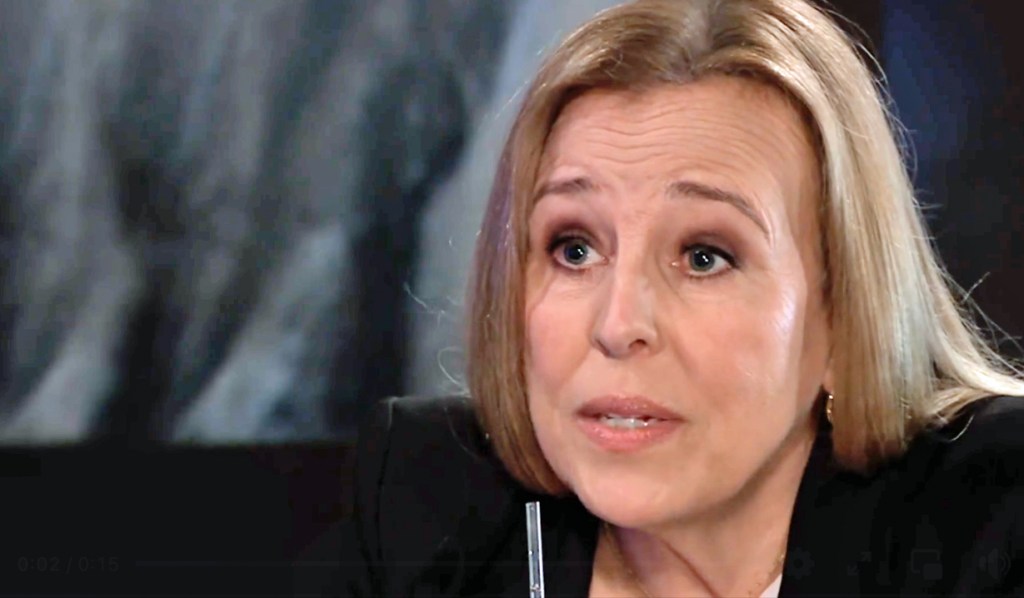 Back at their table, Ava asks Nina whose side Sonny will choose in court? Nina explains that she told Sonny that she doesn’t expect him to take sides, and that she won’t allow Scott to argue with Sonny. Ava realizes how protective she is of Sonny. Ava changes the subject and starts telling Nina all about her problems with Nikolas, Spencer and Esme. They are interrupted when Phyllis calls Nina. 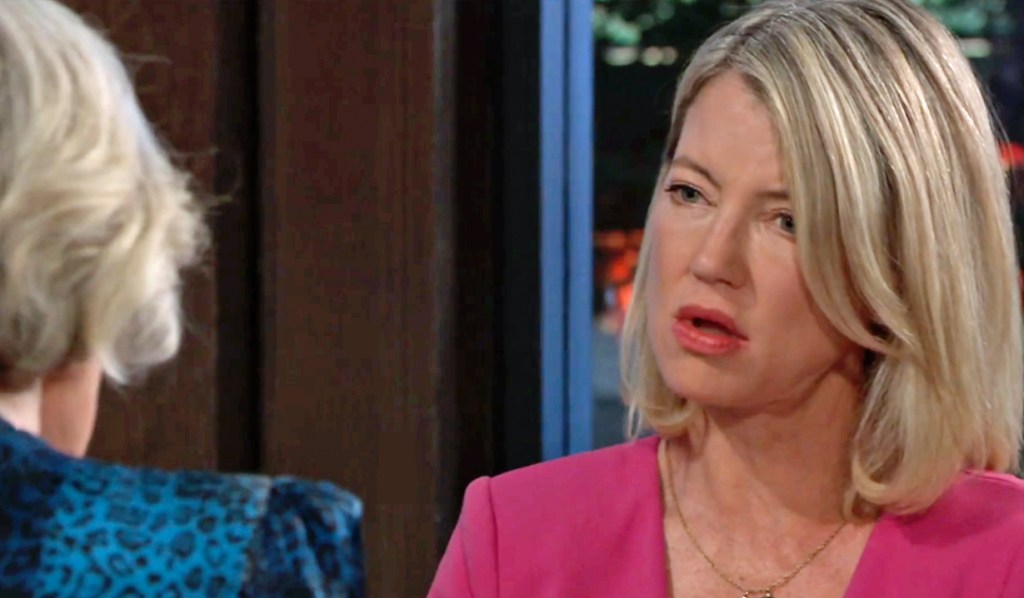 Nina interrupts Sonny and Laura to tell Sonny that the men who robbed Charlie’s are already out on the street. Laura calls and confirms, then apologizes. Nina realizes that Sonny already knew this. He did, and she’s starting to wonder if they can hit Charlie’s again. Sonny assures her that they won’t. He gets a message and tells Nina to go.

Laura joins Ava and shocks her by revealing that she has canceled the vow renewal. Ava notes that Esme isn’t even her biggest problem, it’s that she feels she can’t trust Nikolas. Laura pushes Ava to work things out with Nikolas and show him that they can trust each other. 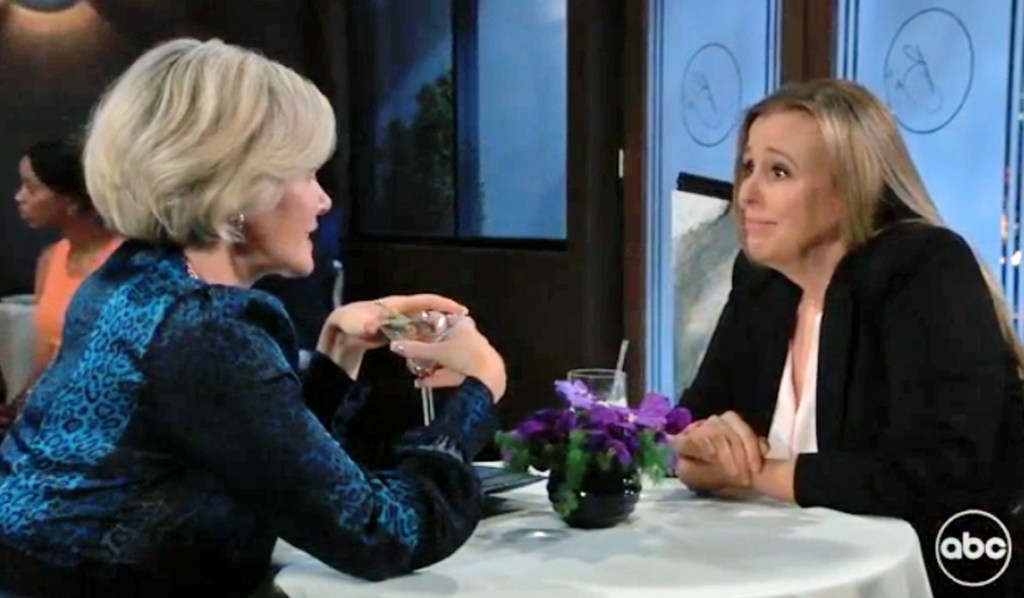 Harmony and Alexis come home and Alexis asks what’s wrong with her. Harmony is terrified and cries that she had one hope, one thing to cling to, and that was Willow. Alexis asks if she told Willow that she is not her birth mother? Harmony didn’t, as she’ll find out. Alexis thinks whatever’s going on can’t be as bad as what she saw tonight. Alexis talks about finding Brendan dead in the harbor. She explains that Jordan was full of questions for her as he tried to hit on her for money. Harmony blurts out if Jordan thinks Alexis killed him, then she’ll… Alexis says she’ll do what? She didn’t kill him either, and they suspect it was suicide. 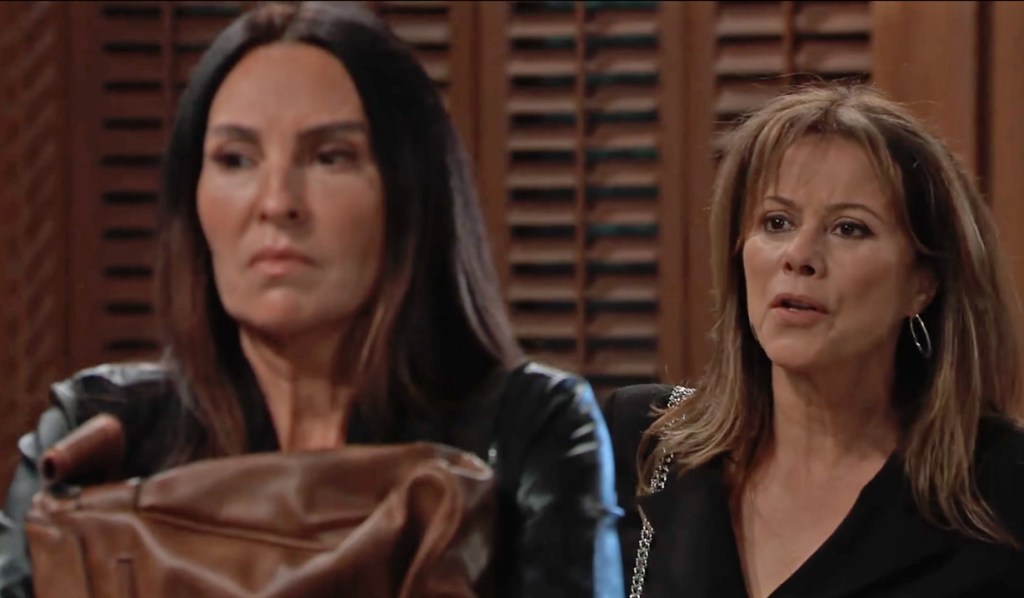 There is a knock on the door and Harmony panics and exclaims, “It’s the police!” However, it is Carly and Sam who drop off Harmony’s car and return her keys. Harmony almost falls, but Carly catches her. Sam and Alexis excuse themselves to make coffee and get some water. Carly suggests that Harmony go outside to get some air. Harmony wonders why she’s being so nice to her? Carly explains that they are Wiley’s grandparents and Willow is her family. Harmony says, “I wish she were mine,” leaving Carly in amazement. 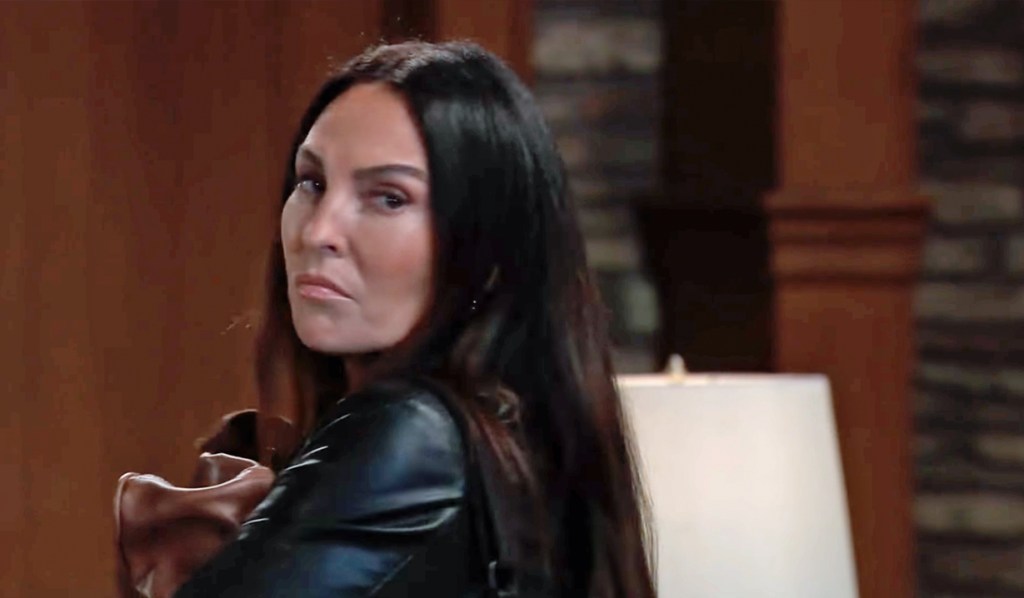 In a garage, Sonny looks into the trunk of a car that Albert opens and finds one of the robbers tied up. Sonny laughs and says he will be joining his friend soon. 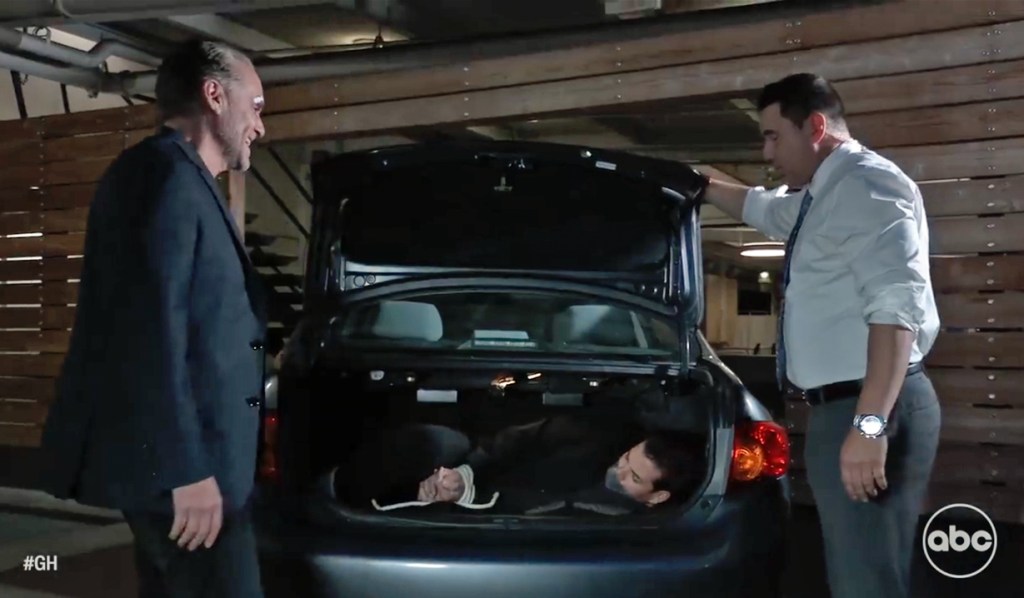 Sonny returns to the restaurant and tells Nina to tie up some loose ends. Nina asks how he’s so sure those guys won’t hit Charlie’s again. Sonny assures her they got the message.

At the next General Hospital: Britt and Drew meet for a drink. TJ asks Curtis what Marshall is lying about. Marshall tells someone he’s leaving Port Charles. In prison, Spencer tells Cam to stick to the plan. Jordan wonders who else was involved. Sonny tells someone they are making a big mistake. Maxie tells Spinelli never to say that.

Before you go, check out the most heartbreaking deaths on soap operas in the photo album below.

Please note that if you purchase something by clicking a link in this story, we may receive a small commission on the sale.