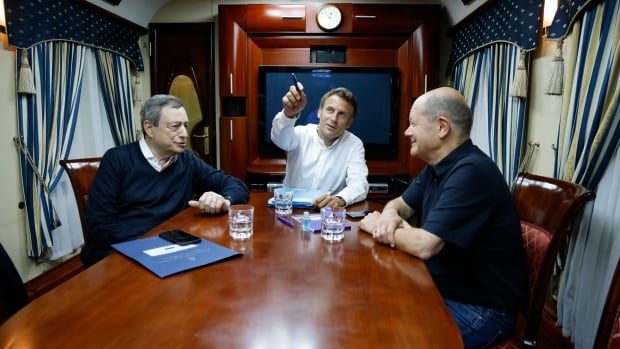 The leaders of France, Germany, Italy and Romania arrived in Kiev on Thursday in an apparent demonstration of collective European support for Ukraine as it tries to resist the Russian invasion.

European leaders are expected to meet with Ukrainian President Volodymyr Zelensky during the most high profile Western visit to Kiev since Russia sent troops to Ukraine on Feb. 24.

The visit comes as EU leaders prepare to decide on Ukraine’s application for EU membership from 23-24 June, and ahead of a key NATO summit of 29-30. June in Madrid.

Also on Thursday, NATO defense ministers will meet in Brussels to weigh up more military aid to Ukraine. On Wednesday, the US and Germany announced more aid as America and its allies provide longer-range weapons that they believe can make a difference in a battle where Ukrainian forces are outnumbered and defeated by their Russian invaders.

On Tuesday, while traveling to Ukraine’s neighbors Romania and Moldova, Macron said a “message of support” must be sent to Ukraine before EU heads of state and government “make important decisions” at their meeting in Brussels.

“We are at a time when we need to send clear political signals – we Europeans, we the European Union – to Ukraine and the Ukrainian people,” he said.

Macron is deeply involved in diplomatic efforts to push for a ceasefire in Ukraine that would allow for future peace negotiations. He has regular conversations with Zelensky and has spoken on the phone with Russian President Vladimir Putin several times since Putin launched the invasion in late February.

Scholz had long opposed traveling to Kiev, saying he “didn’t want to join the line of people rushing in for a photo opportunity”. Instead, Scholz said a trip should focus on doing “concrete things.”

Germany announced on Wednesday that it will provide Ukraine with three multiple-missile systems of the kind Kiev has said it urgently needs to defend itself against Russian invasion.

Germany said the transfer, which reflects similar steps by Britain and the United States, will involve training and will have “a rapid and significant impact on the battlefield.”