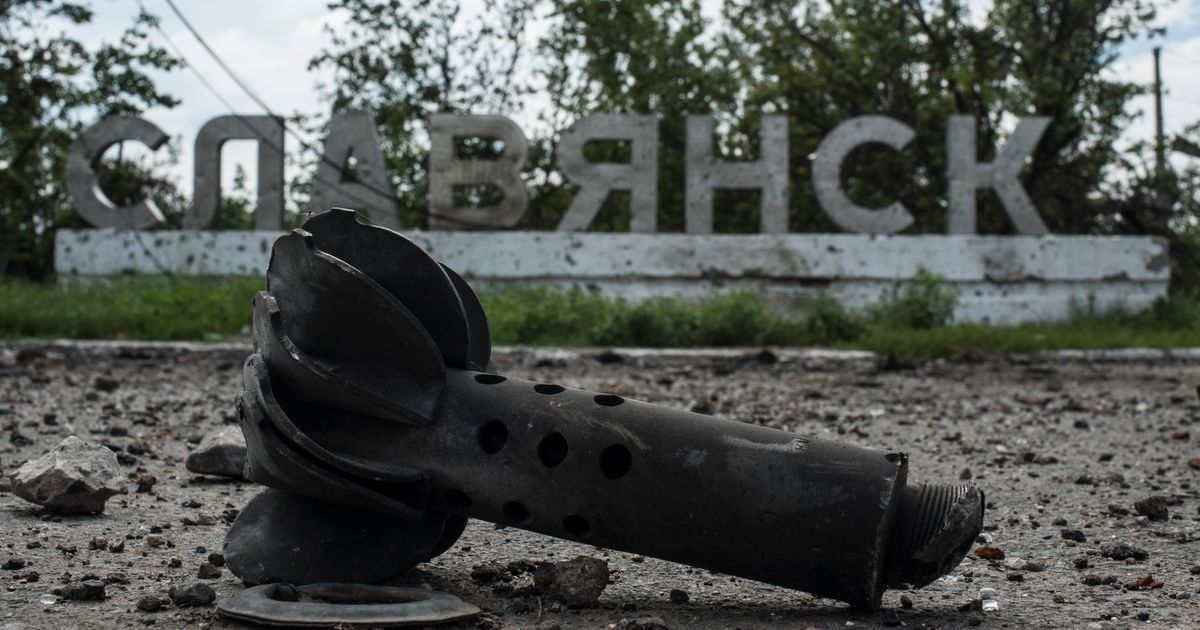 SLOVYANSK, Ukraine (AP) — A group of young off-duty Ukrainian soldiers gathered at a military distribution center to enjoy a rare respite from the fighting that has once again engulfed their broken home in eastern Ukraine.

As they shared jokes and a pizza, artillery explosions could be heard a few miles away — a reminder of the impending battle that threatens to unfold here in the city of Slovyansk, occupied in 2014 by Russian proxy fighters.

“Everyone knows that there will be a huge battle in Slovyansk,” said one of the soldiers, who could not be named for security reasons.

Now, eight years after their city was last occupied, the war has returned. Slovyansk could become the next major target in Russia’s campaign to take the Donbas region, Ukraine’s predominantly Russian-speaking industrial heartland, if Moscow takes Lysychansk – the last remaining Ukrainian stronghold in Luhansk province, 70 kilometers (43 miles) ) to the east.

Another soldier, a 23-year-old accountant who joined when the invasion began, said Ukrainian forces simply do not have the weapons to fight the superior arsenal of the approaching Russian army.

“We know what’s coming,” he said with a sad smile.

These soldiers were still teenagers when pro-Russian separatists took the city and held them for three months. The brief occupation in 2014 terrorized Slovyansk, where dozens of officials and journalists were taken hostage and several murders took place.

Fierce fighting and shelling broke out as the Ukrainian army laid siege to the city in order to recapture it.

Slovyansk is a city of splintered loyalties. With a large retired population, it is not uncommon to hear older residents express sympathy for Russia or nostalgia for their Soviet past. There is also mistrust of the Ukrainian military and government.

After a recent shelling of his apartment building, a resident named Sergei said he believed the strike was launched by Ukraine.

“I’m not pro-Russian, I’m not pro-Ukrainian. I’m somewhere in between,” he said. “Both Russians and Ukrainians are killing civilians – everyone should understand that.”

On Thursday, a group of elderly residents couldn’t hide their frustration after a bomb explosion slashed their roofs and shattered their windows.

Ukraine “says they are protecting us, but what kind of protection is this?” asked a man, who did not give his name.

“They kneel before that Biden – may he die!” exclaimed his neighbor Tatyana, referring to US President Joe Biden.

She said not enough had been done after 2014 to punish people who cooperated with Russian proxies to prevent a recurrence of the situation.

“That’s why we can’t negotiate, we have to win. Otherwise it becomes an endless process. It will keep repeating itself,” she said.

The mayor of Slovyansk, Vadim Lyakh, reflects the new trajectory of the city. Following the lead of the Ukrainian war leader, President Volodymyr Zelensky, the mayor has decorated his office with Ukrainian flags, anti-Russian symbols, portraits of national poets – even a biography of Winston Churchill.

But before 2014, he was part of a political party that sought closer ties with Russia. Lyakh said that while pro-Moscow sentiment in the city has faded in recent years — in part because of the horrors we witnessed in 2014 — there are still “people waiting for the return of Russian troops.”

As the frontline gets closer and closer, the attacks on the city increase. Three quarters of Slovyansk’s pre-war population has fled, but the mayor said there are still too many people, including many children. He encourages them to evacuate. He spends his days coordinating humanitarian aid and strengthening the city’s defenses.

He is increasingly one of the first responders at the scene of bombings. The Associated Press was tracking Lyakh and recently witnessed what authorities described as a cluster bomb attack on a residential area. One person was killed and several others injured.

The mayor says shelling is now at least four or five times a day and that the use of cluster munitions has increased over the past week. While he remains optimistic that Ukrainian forces can keep the enemy at bay, he is also clear about his options.

“No one wants to be captured. If there is an imminent danger of enemy troops entering the city, I will have to go,” he said.

Lyakh said he cannot allow himself to relax even for a few minutes.

“It’s emotionally difficult. You see how people die and are harmed. Yet I understand that this is my job and that no one but myself and the people around me can do it.

One morning last week, Lyakh paid a visit to an apartment building that had been shelled overnight. Most of the windows in the building were blown out, doors were broken wide and an electrical cable was cut.

The same building was bombed in 2014, when the grenade left a gaping hole on the sixth floor and fractured many residents.

Andrey, a 37-year-old factory worker who has lived in the building for 20 years, remembers the bombing and occupation. He said the separatist forces “did and took what they wanted”.

People in his circle have different opinions about Russia.

“Those who have suffered understand what this ‘Russian world’ means: it means broken houses, stolen cars and violence,” he explains. “There are people who miss the Soviet Union, who think we are all one people, and they don’t accept what they see with their own eyes.”

In the eight years since the separatists withdrew, he said, life in Slovenia has improved significantly.

The statue of Vladimir Lenin that once stood in the main square has been removed. Water and power supplies were renewed. New parks, plazas and medical facilities were built.

“Civilization has been returned to us,” Andrey said.

At the military distribution center, the young soldiers talk wistfully about their lives before the invasion.

“I had a great car, a good job. I was able to travel abroad three times a year,” said the former accountant, who plans to stay in Slovenia with the others to defend the city. “How can we just let someone come and take our lives from us?”

Khimion’s husband is on the front lines, and she put her teenage daughter on a train to Switzerland as soon as the invasion began.

“I’ve been robbed of everything – a house, husband, child – what should I do now?” she asks. “We are doing everything we can to stop (the offensive), to keep it to a minimum… But to be afraid is to leave this place.”

At the entrance to the city, a monument named Slovyansk from 2014 is full of bullet holes. It has been painted over several times. It now bears the national colors of Ukraine and a local artist has painted red flowers around each perforation.

Sloyansk residents wonder – some with hope, many with fear – whether the sign will soon be painted again in the red, white and blue of the Russian flag.

Valerii Rezik contributed to this story.