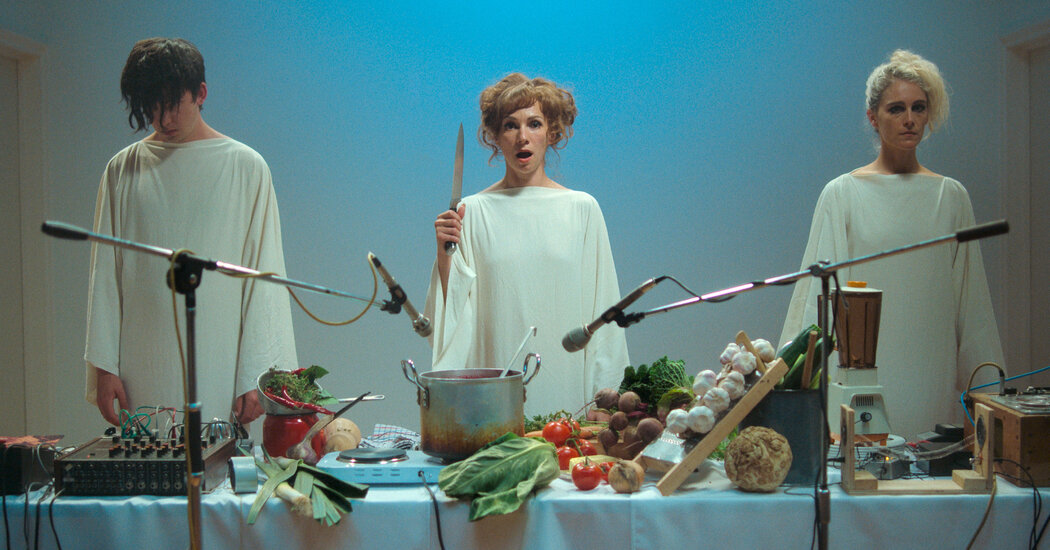 What if the primary sensory purpose of cooking was to stimulate the ears? What if you experience a film through your nostrils and taste buds, or feel it in your gut? These bizarre, intriguing questions are part of the foundation, the backbone – the sofrito – of ‘Flux Gourmet’, the fifth feature film from British writer-director Peter Strickland.

Not the kind you eat – although there are some awkward dinner gatherings and episodes of sneaky snacking. Food, in the world of this movie, is the music of love. Culinary sound collectives are the equivalent of rock bands, building walls of expressive sound from the whine of blenders and the hiss of vegetables falling into hot oil.

One such group, who can’t agree on a name, has been granted residency at an “institute dedicated to culinary and nutritional achievements” in a converted country house. A storyline follows the simmering tensions between Jan Stevens (Gwendoline Christie), who runs the place, and Elle di Elle (Fatma Mohamed, a tough Strickland), the visionary, vegetarian leader of the troupe. Elle firmly rejects the slightest hint of constructive criticism from Jan, who believes her generosity entitles her to be heard.

This tension exacerbates the rivalry within the group. Elle may be the leader, but her bandmates, a floppy-haired emo kid (Asa Butterfield) and an angular avant-garde (Ariane Labed) have their own burgeoning creative agendas. There is also an element of sexual intrigue, as often happens when aesthetic passions are ignited. Meanwhile, a rejected group of culinary artists lurks in the shadows, threatening violence.

All of this is recorded – mostly in Greek voice-over with English subtitles – by a Saturnian guy named Stones (Makis Papadimitriou) who works as the institute’s ‘file’. A writer by trade and a wallflower of temperament, he observes Elle and her colleagues, films their meetings and performances, interviews them together and takes notes about their quarrels.

The poor man has his own problems. Digestive problems, to be precise, disrupting his sleep and souring his already gloomy mood. The family doctor (Richard Bremmer) is a pompous farmer and Stones spends much of his time on the toilet, the rest with the unmistakable grimace of a man who holds back a lot of gas.

There’s clearly comedic potential in his predicament, but Strickland doesn’t exploit it in the obvious ways. This isn’t “Blazing Saddles”; audible flatulence is limited to a single plaintive note, rather than a full symphony. But the unheard music of Stone’s lower tract is nonetheless an important structural element, organizing “Flux Gourmet” into an elegant fugue of contrapuntal themes: coarseness and sophistication; pleasure and disgust; appetite and discipline.

The film is not so much an allegory or fantasy as a witty philosophical speculation about some basic human issues. We are animals driven by lust, hunger and aggression, but also delicate creatures in love with beauty and abstraction. Those two sides of our nature collide in unexpected, infinitely variable ways.

“Flux Gourmet” is Strickland’s funniest movie yet, with more outright jokes than its predecessors, and some superb visual jokes, many featuring Jan’s outfits (they were designed by Giles Deacon, with Steven Jones hats). It’s like a Restoration comedy running through a John Waters filter and sprinkled with Luis Buñuel itch powder.

Perhaps such comparisons are unfair. Elle certainly insists on the absolute integrity and originality of her work, and even when “Flux Gourmet” makes fun of her self-seriousness, it also defends her dignity. Fully committed to the bit, Mohamed makes you believe that Elle is both a brave genius and a complete madman. I tend to think that Strickland is more of the former than of the latter. I’ve never come across a flavor palette like he puts together here, and while this movie isn’t always easy to digest, it’s a flavor well worth acquiring.

Flux Gourmet
Not judged. Running time: 1 hour 51 minutes. In theaters and for rent or sale on Apple TV, Google Play and other streaming platforms and pay TV providers.