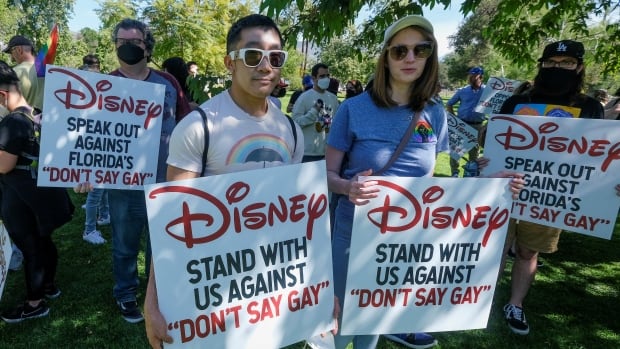 Florida Governor Ron DeSantis on Tuesday asked the state legislature to repeal a law allowing Walt Disney World to operate as a private government over its properties in the state, the latest salvo in a feud between the politician and the media giant.

DeSantis, a popular Republican governor and potential 2024 presidential nominee, has fought with Disney over the company’s opposition to a new law banning sexual orientation and gender identity instruction in kindergarten through third grade.

On Tuesday, DeSantis raised the stakes.

When lawmakers returned to the capital for a special legislative session on congressional realignment, the governor announced that he had issued a proclamation allowing the Republican-controlled state house to pass bills eliminating Disney’s self-governing district.

“I’m announcing today that we’re expanding the call of what they’re going to consider this week. And so, yes, they’ll consider the congressional card, but they’ll also consider ending all special districts established in Florida before 1968, and that includes the Reedy Creek Improvement District,” DeSantis said at a news conference, referring to the company’s administrative district without naming Disney.

The Reedy Creek Improvement District is a private government controlled by Disney World that was established by the state legislature in 1967, allowing it to provide services such as zoning, fire protection, utilities, and infrastructure.

“Disney is a guest in Florida. Today we remind them,” Republican lawmaker Randy Fine tweeted Tuesday.

Disney announced last month that it would suspend political donations in the state over the new parental rights law in education, which opponents called the “Don’t Say Gay” law, over criticism that excluding classes about sexual orientation and gender identity in the early classes would marginalize LGBTQ people.

6:46This Family Says Florida’s ‘Don’t Say Gay’ Law Will Harm Their Daughter and Erase Their History

Brandon Hensler doesn’t want his four-year-old daughter to feel “different” when she starts school next year just because she has two fathers. But he says that’s exactly what will happen if Florida passes its so-called “Don’t Say Gay” law, which curbs discussions about sexual orientation and gender identity in the classroom. 6:46

“Our goal as a company is to have this law repealed by the legislature or overturned by the courts, and we remain committed to supporting the state and state organizations working on it,” Disney said in a statement at the time.

That came only after Disney CEO Bob Chapek previously apologized in a letter to employees about the company’s initial silence when the bill was announced. Some employees went on strike to protest the inaction.

“You needed me to be a stronger ally in the fight for equal rights and I disappointed you,” Chapek wrote.

Disney is one of Florida’s largest private employers, with an estimated 75,000 employees in the state.

Nikki Fried, a Democratic nominee seeking to defeat DeSantis as governor in the Nov. 8 election, said Monday night that the governor “wants to invent culture wars to distract from the fact that he hasn’t done anything meaningful to improve the lives of Floridians.”

“He can keep discussing with Mickey Mouse, we’re going to run a campaign aimed at lower costs and higher standards for the people,” Fried tweeted.