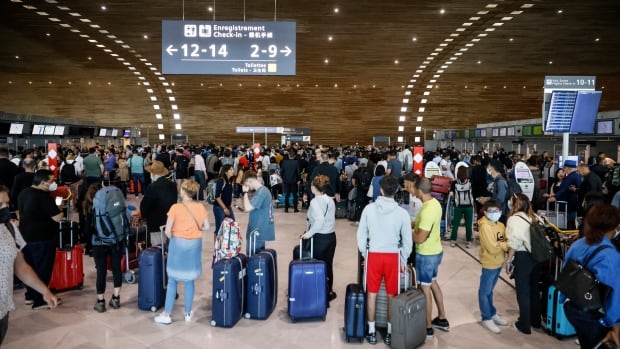 Flights from Charles de Gaulle Airport in Paris and others in France will face disruptions that could last into the weekend on Friday, amid a staff strike and protests demanding salary increases to keep up with inflation.

It’s the latest issue at global airports this summer as travel picks up again after two years of COVID-19 pandemic restrictions.

French airports have been largely spared the recent chaos in London, Amsterdam and some other European and American cities. But on Friday, strikers drew attention to inflation concerns with a strike on the first big day of France’s domestic summer travel season.

Protests were planned at both airports, and the Paris Airport Authority warned of possible delays in entering terminals, check-in, passport control and security stations.

The unions said the strike could last until Sunday.

Workers at Paris airports want a six percent increase retroactive to January 1, while management is proposing three percent, according to French media reports. Charles de Gaulle airport firefighters are also on strike with specific salary demands, forcing the airport to close some runways.

Inflation in the 19 countries that use the euro reached a record 8.6 percent in June, fueled by a sharp rise in energy costs, fueled in part by Russia’s war in Ukraine. Food prices also rose.

Annual inflation in the eurozone rose above 8.1 percent in May, according to the latest figures released Friday by Eurostat, the statistical office of the European Union. Inflation is at its highest level since the euro was registered in 1997.

To counter rising consumer prices, the European Central Bank is planning its first rate hike in 11 years this summer, followed by another hike in September.