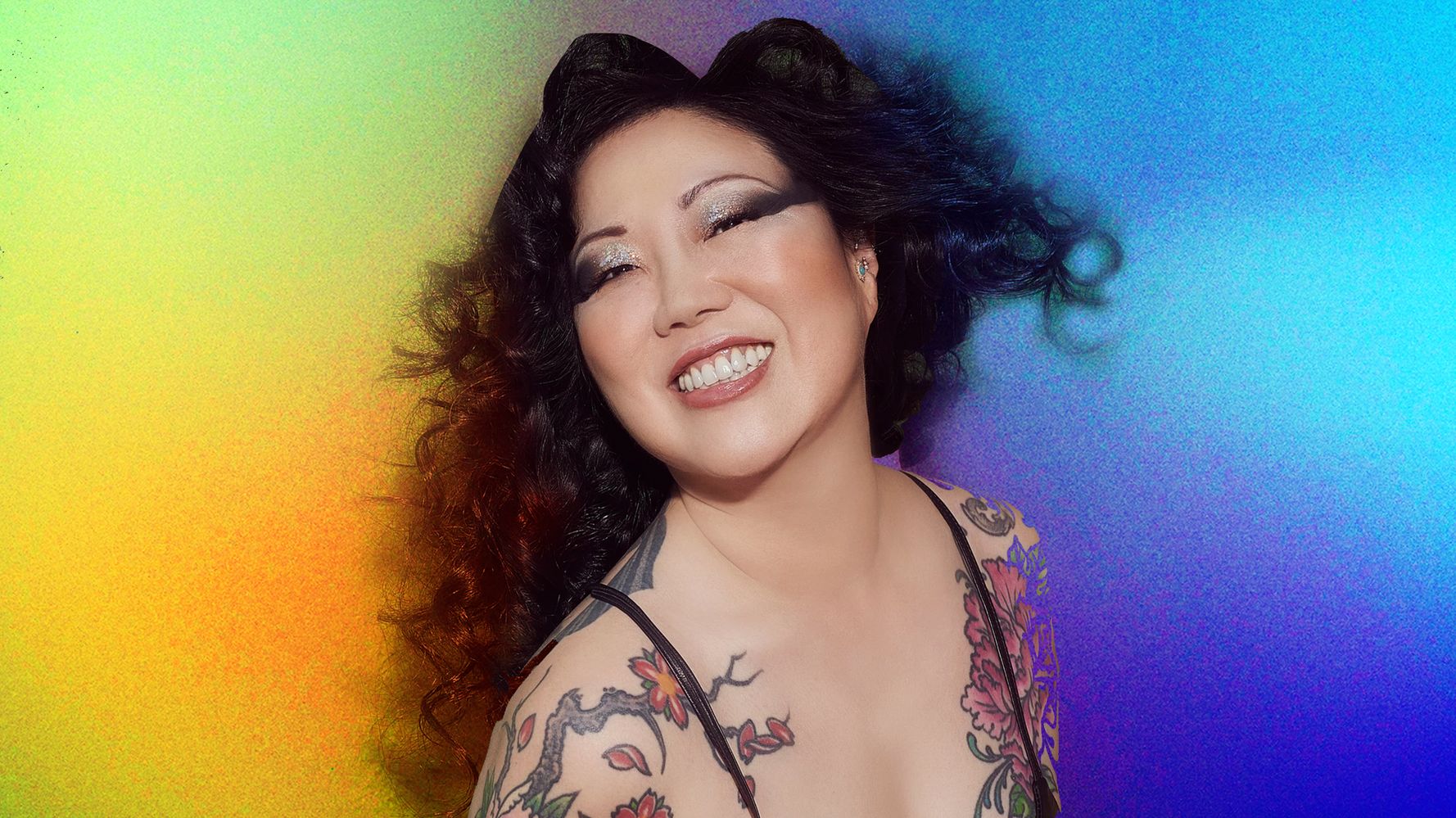 Released just in time for Pride month, the new romantic comedy Fire Island has already become a storm with viewers and critics alike.

Loosely based on Pride And Prejudice, the Disney+ film breathes new life into both the original text and the entire rom-com genre, not just around a group of gay characters, but also with a cast consisting primarily of Asian-American actors.

Among them is stand-up comedian Margaret Cho, whose acting credits include All-American Girl, Drop Dead Diva, and one of Sex And The City’s most iconic moments ever (her character puts on the runway show where Carrie ends up being “fashion roadkill.”).

“It’s a beautiful movie and it’s a real romantic comedy, but told by and with queer Asian-Americans,” Margaret says of why Fire Island appeals to so many people.

“And the beautiful bodies too,” she adds with a laugh. “And Iit’s just so funny.

“It’s very sweet and heartfelt, but it also touches on some profound issues, whether that’s class prejudice and racism within the queer community, that we often fail to acknowledge.

“We’re ignoring much of what Asian-American and queer cinema was about, which is sort of ‘coming out’ and dealing with identity against the backdrop of the mainstream world. Now we are talking about our life in details, on vacation, which I also find very interesting. And about our chosen families.”

She adds: “And it’s also about gay pride and gay prejudice – in a way we should be proud to deal with the rest of the world. But at the same time, the prejudice in us eats us up from within. We don’t recognize that.

“And how the walls of class can still be very stiff and very high, but that can only be broken down with love, which is really what the original Pride And Prejudice is about.”

Who was the first queer you looked up to?

Harvey Milk. My parents ran a gay bookstore in San Francisco in the 1970s. All the people who worked there were gay, and they were all early supporters of Harvey Milk. His murder was the most devastating experience, as a child, that I can remember. It was something that was so incredible.

He was canonized very early in my opinion. So combined with the despair and devastation of AIDS that followed, everyone who lived, loved, survived and died during that time really became a saint, you know? That era was so traumatic and difficult, so anyone who was able to be resilient and get through it is truly incredible. They are all walking wonders. For all of us who were there, we just know. So I have a lot of gay heroes and gay icons from that time and after.

What was the first LGBTQ TV show or movie that you remember resonated with you?

It was actually an older one called Sunday Bloody Sunday. It’s an early 70s movie, but I saw it in the 80s with Glenda Jackson, Murray Head and Peter Finch. And it’s the first time, I think, that a sensual gay kiss has been portrayed in film, in a very positive light.

Murray Head has recently talked about how the kind of very male crew members at the time were incredibly disgusted and panicked about this in interviews.

It’s a beautiful movie, and it really presents bisexuality in a way that’s very nuanced, for the 70s. And it’s Glenda Jackson at her best. It’s a great movie.

It was made by John Schlesinger who also made Midnight Cowboy – another gay movie I know isn’t technically gay, but is still very gay, if you look at it. John and I were friends before he died, and he was such a great director and such an incredible pioneer.

What is a number you associate with your own coming out?

I think, oddly enough, it would be all from Yazoo. Don’t go, or anything else at Upstairs At Eric’s. There’s something about Alison Moyet’s voice that feels and resonates very queer-centric.

What was the most recent LGBTQ show or movie that impressed you?

I. Love legendary. I scream and cry and go crazy looking at it… I love it so much. There are so many things involved, because voguing and ballroom, it’s not just dance. It’s acrobatics, it’s circus, it’s variety, but it’s also art, it’s history. I really go so hard on Legendary. I have to see it several times, I’m so excited.

I watch ballroom on TikTok or YouTube all the time and that’s why I’m always excited to see people I’ve seen before. Knowing that world and then watching it on a competition show is very satisfying.

Who is your ultimate queer icon?

I don’t think we would be historic without Madonna. Madonna brought so much queerness to the global gaze. She brought so much awareness about AIDS and was so forward-thinking about where we should be on sexuality, queerness, doctrine and bisexuality in particular.

That kind of feminine relationships and feminine ideas and feminine goddess worship, within the community, is what Barbra Streisand and Cher and Judy Garland are about. But with Madonna, she also brought in a sense of urgency and a rudeness. All those other ladies used to be quite stylish, even Cher is still very stylish. But Madonna brought a kind of earthiness and gravitas, which I think is very special. She is amazing.

And I think she’s doing that now as she gets older, though people aren’t ready to embrace the way she’s decided to age. But I think it’s really fantastic. She says, “I’m getting so old, and you’re going to experience my… NFTs.” I love it! It will be appreciated later, we’ll see how great this all is later.

Who is a queer person in the public eye right now that gets you excited about the future?

Joel Kim Booster and Bowen Yang – both are so amazing and talented and gorgeous. Fire Island is so great for them, but I know it’s just the beginning of what they’re going to bring. I am so in love with them.

Why do you think Pride is still so important today?

In the United States, we’re dealing with anti-gay and anti-trans laws, and the possibility of parents getting jail time for having trans children, what’s… why are we dealing with that? The violence against the queer people, the legislation I find so disgusting. How did we get to this?

What is your message for the next generation of LGBTQ people?

My message is really just to celebrate who you are because we are part of this incredible story of resilience and resistance and joy that has been around since the dawn of time. And now we are entering a special era where we will be seen and heard, and we must celebrate and enjoy that.

And look to history for inspiration, and keep inspiring the rest of us. Because even though we’ve been here, we still have to learn. I love that I can learn from the new generations, they really teach me a lot.

Fire Island is now available to watch on Disney+.

HuffPost may receive a share of purchases made through links on this page. Prices and availability subject to change.