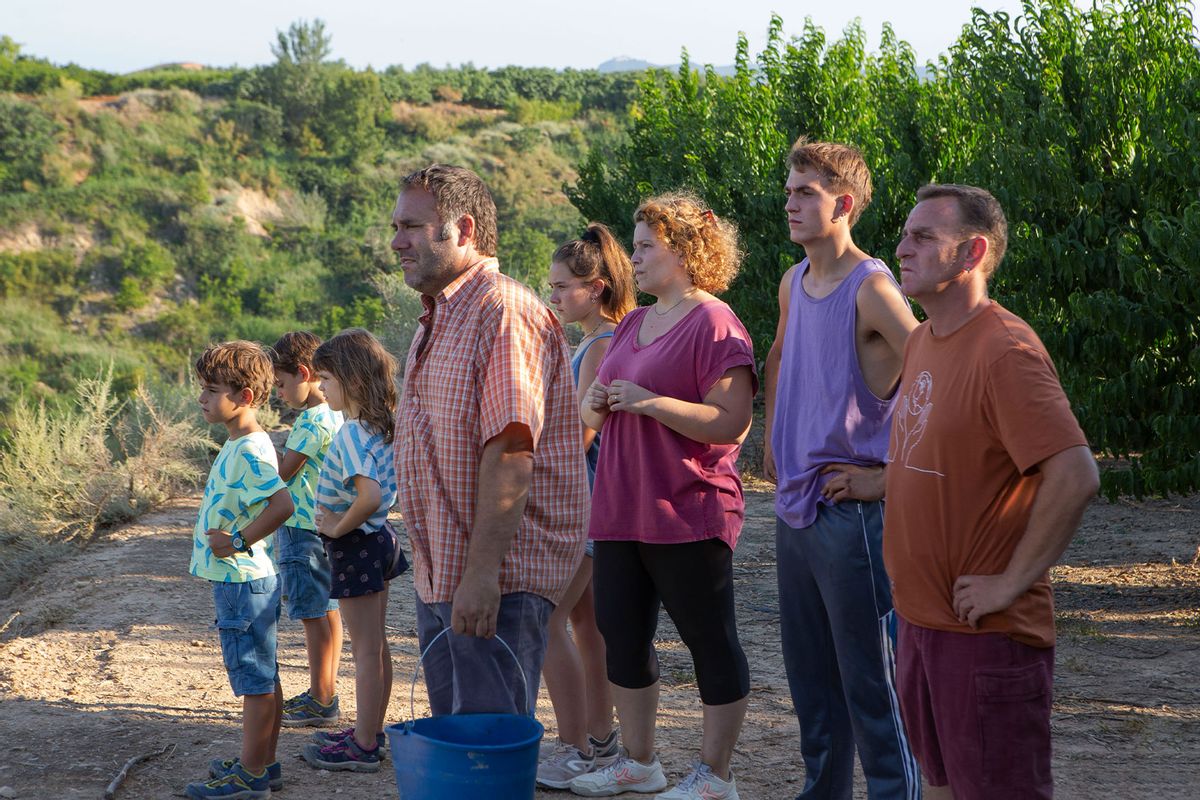 Although it is set in a small Catalan village, the themes of “Alcarràs” are universal. Screening at the New York Film Festival on October 6, 7 and 12, this riveting drama immerses viewers in the life of a farming family struggling to make ends meet.

Rogelio (Josep Abad) is the patriarch whose failure to sign a contract for the land given to him means the family will have to move at the end of the summer. This fact infuriates his son Quimet (Jordi Pujol Dolcet), who manages the peach farm with the help of his son Roger (Albert Bosch), as well as members of his extended family and the occasional migrant worker.

Pinyol (Jacob Diarte), who owns the land, encourages Quimet to “farm” solar panels—to work less, earn more, and stay on the land—but Quimet resists, digging at his heels and causes tension within his own family. How the other family members react to Quimet’s stubbornness is set in the film.

Directed by Carla Simón, who co-wrote the script with Arnau Vilaró, “Alcarràs” allows viewers to take in each character and understand their life, desires and frustrations. Roger is particularly well drawn; he takes revenge when Quimet discovers the secret cannabis crop he is growing. But Quimet’s wife, Dolors (Anna Otin), and their daughter, Mariona (Xènia Roset), also get compelling storylines that help create a strong family portrait.

“Alcarràs” also deals with issues of fair prices for farmers, as Quimet is part of a collective that is organizing a protest for farmers who are being squeezed by big companies.

Simón spoke to Salon about making her new film.

“Alcarràs” provides a microcosmic look at a family, a farm and a community by allowing viewers to eavesdrop on their lives. What inspired you to tell this particular story?

My two uncles grow peaches in Alcarràs, a small village in Catalonia. When my grandfather died, I thought, “What would happen to the trees that were there forever if they disappeared?” This doesn’t happen in my family because my uncles still grow peaches, but it happens in other families; they have to leave their farms. This way of living, farming in small family groups, is no longer as sustainable as it used to be. They have to leave their country and do something else.

Can you discuss why you told this story in a relaxed, highly unstructured, compelling way? It’s very effective.

The structure of the film was challenging because it is an ensemble piece. We had to think about each character and their emotions, and how one character’s emotions can affect someone else, so we went with that domino effect. It was difficult to show these different points of view, but it was also liberating.

Quimet is a poisonous man, which does not consider the impact of imposing its will on everyone. He seems to be stubbornly fighting an uphill battle, believing he is right, but in denial of reality. It manifests itself in his back pain and his relationships with his family. He is a fascinating character and not unsympathetic, despite making some bad choices. What observations do you have about him? We keep our fingers crossed for him, but he is poisonous!

Yes, that’s him. We wanted to do a portrait of this place, and right now we have all these stories of powerful women who are feminists. But this [toxic men] still exists. In these rural places they still know nothing about feminism, and the family structures are still quite old. We wanted to give some hope through the character of Mariona, the teenager who sees [Quimet] as the boss, as the one who begins to think about breaking the patriarchal cycle. Quimet’s masculinity is poisonous, but it’s important to portray a man who can be tender and feel emotion.

I’m curious how you made the stories for the other family members. I loved the young troublemaker Iris (Ainet Jounou) and her co-conspirators, Pau (Isaac Rovira) and Pere (Joel Rovira), as well as the storylines of Mariona and Roger, along with members of the extended family. Can you share your approach to the story that makes viewers sink into the rhythm of these lives?

When I thought about the story, the most obvious choice was to tell the story from Quimet’s point of view. But I am not a 45-year-old man who is a farmer. That is far from my experience. But I can talk about family relationships because I’m part of a big, big family. I like the idea of ​​cinematically showing what it’s like to be part of a big family. I wanted to talk about a family crisis, because you can’t choose your family, and when there’s a crisis, it affects you. This is the case with the younger generation. I care about how the kids feel; the younger ones have a mysterious view of everything because they don’t understand the whole picture. It was interesting to talk about generations and the relationship between grandfather and grandchildren. It’s about a way of life. They are about to lose the land and this way of life is about to end. It has consequences; this way of living with different generations in the same house is also disappearing.

Can you talk to the younger characters about the different storylines?

With the children it is intended that they play in the place where they normally play, [an abandoned car], and someone takes this car from them. They are the first to lose something. Since they are kids, they are looking for another place to play the entire movie. It’s a metaphor for what happens to the adults.

Mariona is the character closest to me. She is at this age that you start watching the family. She is the observer and we see a lot through her eyes. We understand the grandfather’s feelings through her. She has a will to leave this place so she is in the family but she has this outsider perspective

For Roger, it was interesting for me to have a character who is a teenager who wants to be a farmer, because of the lack of generational inheritance. He wants to keep working the land, but he won’t succeed. Young people are leaving this place and Roger will have to leave, but against his will. It was interesting to show this, and the mixed feeling Quimet has with his own future and that of his son. Quimet wants his son to stop working the land so that he can more easily study or do something else, but at the same time it makes him proud to see that his son has the same love he has for the land.

“Alcarràs” is a film about tradition versus modernization, but it is also about opportunities. Is progress a good thing for these people who have been farming for generations?

We definitely want solar panels. So I thought this was an interesting dilemma. I like it when the bad person or side of a story isn’t that bad. the landowner [Pinyol] has its right to do so. Quimet’s sister and brother-in-law want to work in his solar panel company. It’s interesting to show a dilemma where both can be okay – even if you’re on the side of the family. What I don’t like about green energy in Spain is that it is not always applied well. They sometimes put solar panels in places where they can work the land. That makes no sense. They could choose other places. It’s a complicated issue, but we want green energy, but we have to be careful how we do it.

What observations do you have about the use of migrant workers portrayed in your film? The family can only afford one man.

Many people think that people hire undocumented migrant workers. This is not true. There are huge controls. If you have an illegal employee, you have to pay 10,000 euros if the police catch you. The farmers are doing well. People come to these villages every summer and that is a problem. The workers live in bad conditions. Migrant workers could have a movie, because they have interesting stories, but “Alcarràs” was about this family. The families do not have much contact with the workers, even though they see each other every day. They don’t know much about each other. It was interesting to make the little girl curious about them, but the others don’t interact with them too much. This is what is happening. They need each other and spend a lot of time together every day, but they live in separate worlds.

Can you say something about fair pricing for farmers, which is also discussed in “Alcarràs”?

It’s a big problem. Farmers grow the fruit without knowing how much they are getting paid for each kilo. Sometimes they get paid less than what it costs to produce it. It depends on the year. This year there was a lot of bad weather, which resulted in a lot of fruit being wasted. So you could say it was a bad year. But at the same time, it was a good year for those who could sell their fruit because the price was higher. The people whose fruit was wasted got money from the insurance. The worst harvest is when everyone has fruit. It shouldn’t be that hard to regulate a little.

Your film can be seen as cynical because the possibilities are limited, or as hopeful because people are free to do what they want. How do you watch your movie?

Both ways, somehow. It’s interesting because at the beginning of writing I wanted a happy ending. My uncles are still growing peaches, so we have to end up with some hope that they still can. But by making the film and talking to the farmers, we realize that they have no hope and are pessimistic. We went to a demonstration for farmers and we thought this way of life is really going to end. Not the agricultural world, but this way of small family farming came to an end. So we can’t have a happy ending. But it doesn’t necessarily have to be a sad ending. It would be difficult to keep doing this. So it’s an opportunity to start over and do something different, and find a different way of life that can make them happy, even if they don’t know it yet. You can look at it from two sides.