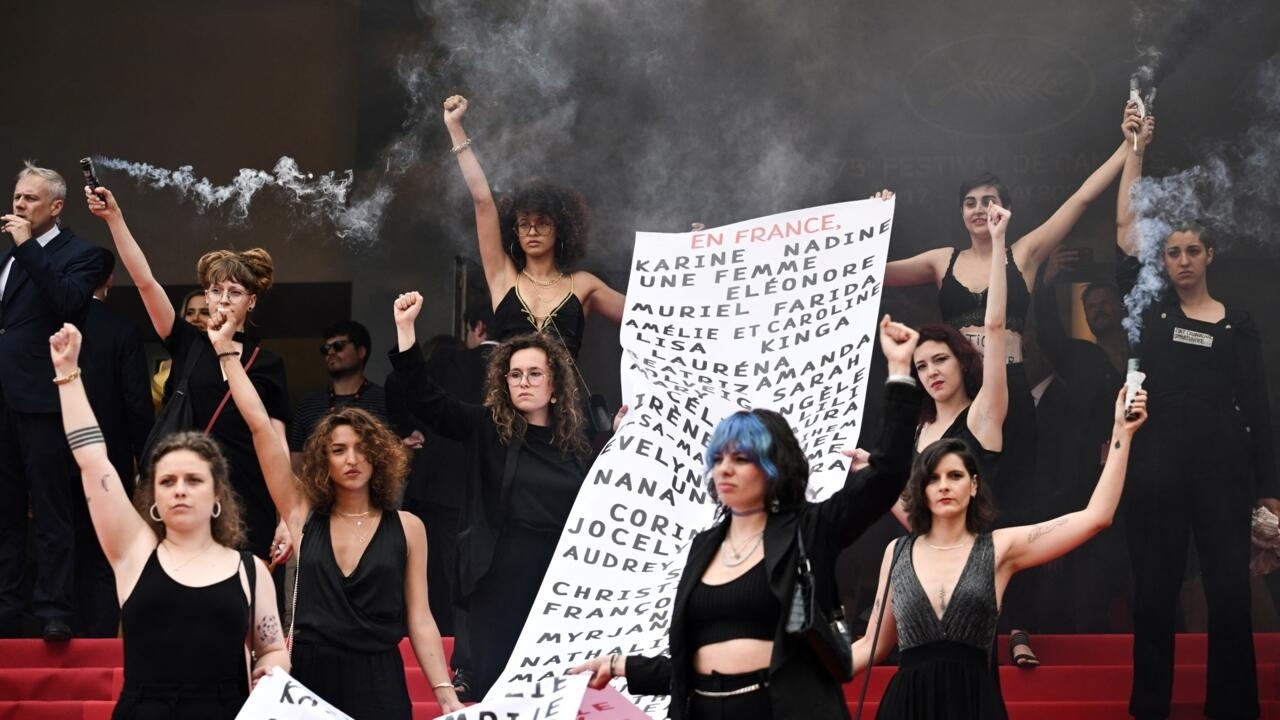 French women took on patriarchy on the big screen and on the red carpet with the screening of “Feminist Riposte” in Cannes, by Marie Perennès and Simon Depardon, about the feminist activists whose influential poster campaign highlighted the scourge of sexist violence.

Political protests are ostensibly banned on the Cannes red carpet. But twice this year, the famous footbridge has been the scene of dramatic protests calling for violence against women.

On Friday, a woman interrupted a red carpet premiere, stripping off her clothes to reveal the words “Stop raping us” written across her torso, alongside the blue and yellow colors of the Ukrainian flag. She was quickly covered and chased away.

Two days later, feminist activists took over another premiere and unfurled a long banner with the names of 129 women murdered in France since the festival last took place. This time, security seemed unfazed as the black-clad protesters stopped on the steps of the Palais des Festivals and released plumes of smoke from portable devices hidden in their clothing.

The protest of members of the Colleagues activist group coincided with the premiere of Ali Abbasi’s competition entry ‘Holy Spider’, about the serial murder of sex workers in Iran. It was linked to another movie,”feminist response” (“Feminist Riposte”), screened later in the day documenting their struggle to fight sexism, sexual violence and the scourge of femicide.

Armed with brushes, glue and sheets of paper, Colleagues – literally, the gluers – have launched an economic, creative and highly effective campaign to make women’s voices heard in towns and cities across France, walls plastered with slogans denouncing sexist violence. “Feminist Riposte”, by Marie Perennès and Simon Depardon, follows them through their nighttime raids as they defy the law to stick their slogans on the streets during Covid-19 lockdowns and curfews.

“Sexism is everywhere — so are we,” says a popular catchphrase. “If you don’t want us in, we’ll stick stuff outside,” reads another, plastered over the entrance to an art gallery in the Breton city of Brest, where a group exhibition shows only male artists. The action and the message are just as important as the Colleagues reconquer public spaces, by countering the masculine ubiquity in street names, on building facades and in graffiti.

“Did you notice how many cocks were drawn everywhere during the Tour de France?” asks a bewildered gluer in one of the film’s many glorious lines. “What’s the matter with men that they have to draw their penis everywhere?”

“Feminist Riposte” Strikes Back With Its Own Tour de France, a journey through the towns and cities of the country, big and small, and meet the ‘strong, united and tough’ young women who take the fight to the patriarchy. They have a merry activism, driven by sororities (images of them stirring glue and hot water in pots, “like witches over their cauldrons”, is a special treat). But they are also aware of the urgency of their case in a country with persistently high femicide rates.

Throughout the film, Perennès and Depardon remain silent observers, preserving the atmosphere of understanding and solidarity in the groups’ discussions, allowing the Colleagues feeling comfortable, being open, and broaching difficult topics.

“The first time someone said to me, ‘I believe you,’ I was shocked,” says one activist, who talks about the personal ordeal she went through. “Thanks to MeToo, I realized I wasn’t alone and I wasn’t to blame,” adds another. Discussions often revolve around the topic of violence as a useful and legitimate tool to “protest against”.

“Touch one of us, we’ll hit back,” the plastered slogans warn, signaling the Colleuse’s willingness to repay in kind. In one powerful scene, a feminist march silences and expels a group of anti-abortion activists, showering them with cries of, “My body, my choice, shut up now!”

FRANCE 24 spoke to the film’s co-directors about the making of “Feminist Riposte” and the importance of bringing the Colleagues to the world’s most important film festival.

The film depicts the liberating effect of pasting messages on walls and ‘recovering’ them. How did you film those scenes?

Marie Perennes: The act of plastering the walls with slogans is practically as important as the message itself. It’s the whole idea behind the re-appropriation of public space. This space where women are not normally welcome, well, you have to reclaim it, day and night, and clearly state that you have every right to be there.

We tried to substantiate this idea of ​​re-appropriation by the way we filmed the scenes and positioned our camera. We didn’t want it to look like a news story, with a shaky handheld camera ‘posting’ images, almost anxious, adding stress and urgency. Instead, we placed our camera on a tripod, with the idea of ​​taking it to the streets (de Colleagues) and accompany their action, emphasizing that they have every right to be there.

Simon Depardon: Our goal was to make something that was both politically engaged and cinematic. We didn’t want to do a history of the movement, a series of interviews in front of the camera. Instead, we wanted to capture a moving image of the Colleagueswhich would be seen in the cinema and last a long time.

How important was it to you to cover the latitude of France?

MP: We were determined not to stop at Paris, as is often the case with films dealing with political topics. We wanted to travel across the country, meet different kinds of people and search for details in each town or city. We also wanted to show the connections between young activists who don’t know each other, but who act with the same determination and courage across the country.

SD: The posters were also a pretext, an opportunity to film French youth and the political commitment of a generation that is not at all apathetic. We wanted to counter the idea that rural parts of the country are lost to the far right. Young people want to participate in the democratic life of the country. Not necessarily by voting alone, but also with paint, glue and sheets of paper – and without asking permission.

Your film emphasizes the inclusive nature of the movement and its fight against all forms of discrimination. It does not address divisions over the issues of transphobia and biological sex. Was it a conscious choice?

SD: Our film is not a comprehensive overview of feminism. As we toured the country, the atmosphere we got was one of sorority and a great desire to change things, especially regarding femicide. The issue of transphobia came up in discussions, but only to a degree and not as a source of division. We didn’t want to give it any more importance than what we actually saw on the ground.

MP: We were also disappointed to see that the media coverage of the movement was often distorted, almost caricatured. We wanted to stay true to the young women we encountered, who we found deeply moved. These are complex issues and our film is not a complete history of the movement. It is based on 10 groups of Colleagues out of about 200 there are in France, and the issue (of transphobia) was not a source of tension.

The Colleagues made a big impression on the festival. What’s next for them?

SD: We were delighted to be able to unite many Colleagues from different parts of the country here in Cannes. They had been in touch on social media but had never met, it was touching to see them come together at the festival. They took the opportunity to do something spectacular on the red carpet. It is important to have such powerful images to make the cause visible.

MP: The posters are more of a tool than a movement, one that you can deploy at night in a small street or on the red carpet in Cannes. We are talking about something that is multifaceted, that will continue and evolve. Our concern was to keep a track of a movement that belongs to a time, a post-Covid moment when people felt a great need to express themselves and change things. Even if the posters end, the determination will remain and somehow express itself. Our film is not about the posters; it’s about young women fighting for a cause.