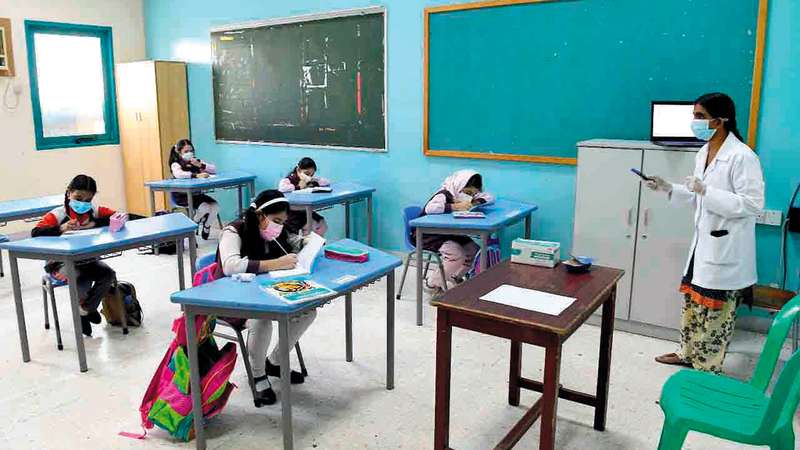 The results of a survey conducted by “Emirates Today” showed that 56% of student families choose their children’s school based on the value of tuition fees, while the Abu Dhabi Department of Education and Knowledge is developing a policy for tuition fees, aimed at a clear approach to organize it, both for private schools and for families of students. , to ensure it reflects the quality of education.

The survey, which presented the main factors influencing parents’ choice of school for their children, found that 56% of them choose it based on the value of their tuition fees, 18% based on opinion of parents of students enrolled with them, 13% based on their location from their hometown, and 13% their choice is based on Results of improvement reports for school inspection.

A number of families of students, Muhammad Nader, Sayed Mahmoud, Safa Abdoun, Khawla Bahy and Iman Mahmoud, confirmed that the value of tuition fees is the first question asked when inquiring about the school, to ensure that they pay regularly, so as not to affect their children’s school progress, pointing out the “proximity of the school to the place of residence or the evaluation of its level based on the opinions of acquaintances and parents of students registered therein, or based on the reports of the School Inspection Programme, are considered, but it is not the deciding factor.”

Parents of students, Mustafa Nada, Ibrahim Jamal El-Din and Laila Wasfi, confirmed that they had to pick up their children from their school after having attended it for several years due to the increase in the value of tuition fees in higher classes at higher rates. than their financial capabilities, pointing out that “school selection should not be based on the foundation for kindergarten fees, but rather on total costs, and anticipate rate increases between 10 and 15% so that parents are not forced to school change.”

According to the latest fees announced in the reports of the “Irtiqa” program to inspect private schools in Abu Dhabi, the highest fees for a private school in the emirate was 96,333 dirhams (British curriculum), while the lowest tuition fees collected by a private school amounted to 2,300 dirhams.

The lowest tuition in UK curriculum schools was 3,200 dirhams and in the US curriculum between 4,200 dirhams to 83,000 dirhams, depending on the school and class 27 thousand and 200 dirhams.

In Indian curriculum schools, the cost varied between 5000 and 25 thousand dirhams.

The Ministry of Education and Knowledge, for its part, reaffirmed its commitment to build a high-quality education system that encourages innovation and excellence, contributing to the preparation of students to meet future challenges through programs, initiatives and regulations that promote the educational process and its outcomes from kindergarten to the end of secondary, pointing to a willingness to provide a group of schools that meet the needs of different segments of society, suit their cultural backgrounds and respond to the diverse aspirations of parents.

The Department has stated in its Policy and Guidelines for Private Schools manual that it has a clear and transparent policy to regulate fees for both private schools and students’ families, to ensure that tuition fees reflect the quality of education, noting that it considers conducting a financial study using the financial model it established for this purpose and comparing school fees with rates from schools of comparable quality and curricula, while assessing the overall effectiveness of the school is estimated in the final evaluation report, in addition to the cost of school facilities and services, and to ensure that no fees are established that would allow the school to make excessive profits, highlighting its refusal to prioritize commercial interests over quality wise.

The Ministry of Education and Knowledge emphasized the need for the school to obtain department approval regarding tuition fees, payment schedules and payment procedures before announcing and proceeding with their collection, noting that verified the schools’ commitment to their fee model.

She said, “The school is prohibited from collecting fees in excess of what the department has approved before the start of the academic year.”

Parents of students choose their children’s school based on cost.

A school in Abu Dhabi whose tuition fee is less than 10 thousand dirhams.

96 thousand and 333 dirhams .. the highest cost for a private school in Abu Dhabi, “British Curriculum”.