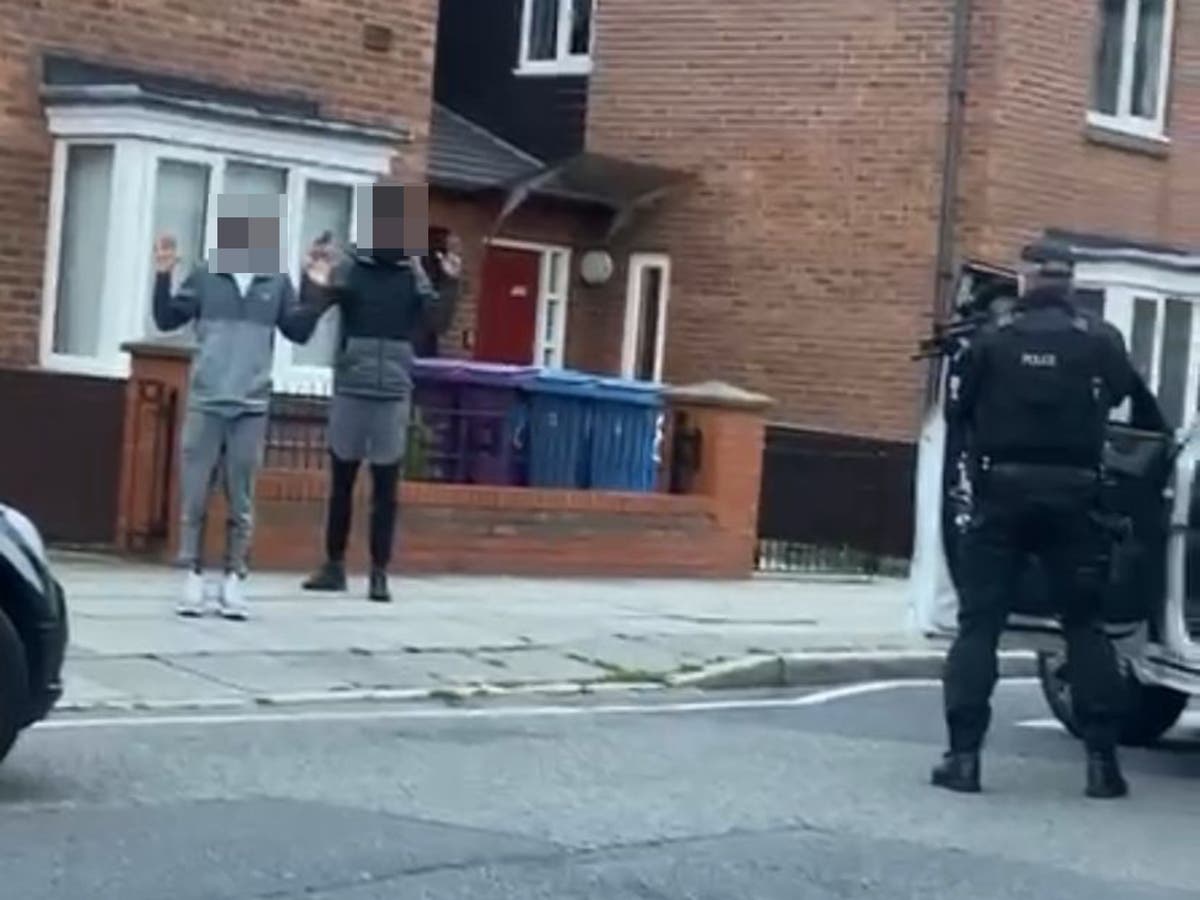 The father of a black student who was held at gunpoint by “institutional racist” police feared his son could have been killed in the incident.

The force has been accused of racial profiling after two young black men, who have asked not to be named, were run over by armed officers in Toxeth, Liverpool, as the couple walked home from a mosque last Monday (June 27).

The father of one of the men said the family has made a formal complaint to Merseyside Police after officers detained the young man and his friend for “matching the physical description” of a suspect.

“I feel like I could have lost my son,” he said The independent. “I’m raising my son to make a positive contribution to society and to feel safe, but now I don’t believe he is.

“I am proud that he obeyed the police and acted calmly, but you can imagine how scared he is as a young boy, he has never experienced anything like this,” he added.

The video shows the shocked young men raising both hands while the police guns remain pointed at them at close range.

More armed officers can be seen arriving on the scene in vehicles. A subsequent clip shows one of the men being held in handcuffs while being searched by armed officers who tell him to shut up.

The couple were handcuffed minutes from their home after reports that someone had been seen in the area with a gun.

The community tried to intervene, pleading the innocence of the two students, who were later released by police without further action after no weapon was found on them.

The father denounced the Merseyside police response that the young men “matched the physical description” of the suspect.

The father said his son is a senior at university and wanted to get some fresh air after completing an assignment when the incident happened.

His son is now so saddened by the situation that he urges his son to ask for emotional and mental help. He added that the family has not been contacted after the incident to explain what happened or offer any support.

“We have to learn something from this. It’s happened before, it’s happened now, and it could happen again. If those two youths did not act calmly, what would be the action of the police? They could have been killed,” the father added.

Kim Johnson MP for Liverpool Riverside, which covers the area of ​​the incident, condemned the police action against the two young men.

“I absolutely condemn the police action here and am not happy with the response I have received that this response was proportionate or necessary. I will pursue this with Chief Constable Serena Kennedy,” Ms Johnson said.

She added that the incident resembled something from the streets of America and not Liverpool and blamed the force of harassing the young men for being black and leaving them traumatized as a result. She called for an end to racial profiling and scapegoats in power that she labeled institutionally racist.

Granby Somali Women’s Group, which supports the affected families and community, said people are outraged by what has happened.

“I’ve talked to a lot of people in the community and they said that on a regular basis, the police show up in the area and ask for ID, don’t tell them what the situation is, put them in handcuffs, put them in police cars. † This happens a lot.

Ms Elmi added that one area of ​​concern among the community was how police behaved to tell onlookers that their phones would be seized and put a taser on the back of one of the young men.

“We are in contact with the complainant and will keep him informed of the progress of the investigation into his complaint.

“It would be inappropriate to comment further at this stage.”

In an original statement, Chief Inspector Diane Pownall said the search was “justified and appropriate”.

“As with all reports of someone armed with a firearm, armed response officers were authorized and deployed in the area. They saw two men on nearby Mulgrave Street, one of whom matched the person’s physical description and wore clothing that matched the clothing described,” she said.

Ms Pownall added that police have also been in touch with Ms Johnson to explain the officers’ approach and listen to their concerns.