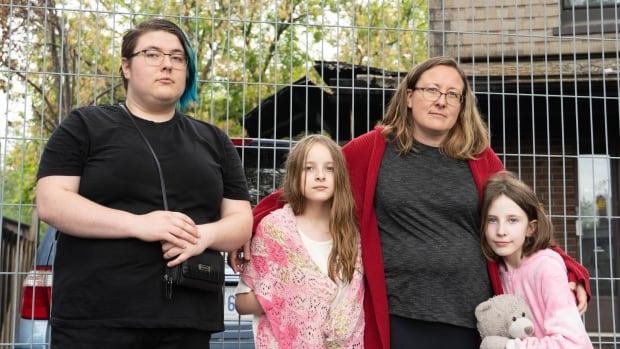 Like tens of thousands of others, the Riggins home lost power in the Derecho storm. A few days later, the family, which included two parents and four children, lost their home to a fire.

Liz RIggins calls it a “very hard, surreal two weeks” as the family copes with the sudden, devastating loss all related to last month’s storm that swept through the Ottawa region.

“But the family is together and that’s what counts for us,” Riggins said on CBC Radios Ottawa morning on Tuesday.

Riggins, her husband and four children were among Hydro Ottawa’s customers who lost power during the powerful storm on May 21. They were lucky though, as they had a generator.

It’s the scariest moment of my life.– Liz Riggins

They also wanted to share that fortune by inviting her brother-in-law’s family to stay with them. That meant 10 people lived in the house “enjoying the minute amount of power we could have,” Riggins said.

The two families shared the house for a few days while they waited for the power to return. Then on the night of May 23, a Monday, Riggins remembered that they had turned off the generator and said that the candles had all blown out.

“But unbeknownst to us, that was not the case,” she said.

Her husband woke up for work around 5 a.m. the next morning to hear “what sounded like pots and pans banging downstairs.” Riggins said she also woke up to the noise and looked at the garage.

†[I] only saw a wall of fire,” she described. “It’s the scariest moment of my life. I’m used to shooting… but this was unlike anything I’ve ever seen.”

Realizing that a fire extinguisher wouldn’t do anything to subdue the flames, Riggins yelled to warn the others that the house was on fire.

Once outside, the 911 dispatcher told Riggins to count the number of people. They realized that her niece was nowhere to be found. Her brother-in-law and a neighbor ran back inside and grabbed her.

“At that point, the house was up in smoke,” she said. “Fortunately she was on the floor [on a blow-up mattress]so she hadn’t inhaled any smoke.”

“We all made it out alive and safe and we’re looking at things day by day,” she said. “That was an extremely, extremely close call.”

Days After the Thunderstorm, This Ottawa Family Woke Up to ‘A Wall of Fire’

Liz Riggins described what it was like to lose their home to a fire just days after losing power during last month’s severe thunderstorm. She says they used candles in the garage to help them see their generator, which may have started the fire.

Riggins said her family is lucky they got out unharmed. She says they try to stay positive.

“My husband and I have a philosophy that as long as our family is together and safe, everything else is just window dressing,” she said. “It’s a house. It’s a building that can be replaced.”

The Riggins family now lives out of a hotel and prepares to move into a rental home. They bring the clothes on their backs and some sentimental items, such as her daughter’s blanket knitted by her grandmother and a figurine of a trip to Africa.

Fire investigators have not yet confirmed the cause of the fire, but Riggins has her suspicions.

She believes the gas canisters that were in the garage and used to fuel the generator had caps that weren’t fully tightened. Although the candles were no longer lit, she believes gas vapors sparked the candle while they were sleeping.

In the aftermath, Riggins wonders what the family could have done differently. She said one of the firefighters had told them that a smoke detector in the garage may have warned the family of the fire earlier.

“We keep a lot of flammable objects there,” she said.

Riggins’ daughter Cassy stood outside their old house on Tuesday and described the harrowing morning, clinging to her teddy bear.

“The first thing I thought of when I heard my mom say the house is on fire is grab Beer-Beer and run out of the house,” the eight-year-old said. “I was shaking like crazy… like a volcano erupting.”

The community has gathered around the family of six by launching a fundraiser, which “brought tears to our eyes,” said Liz Riggins.

“Knowing that everyone is there for us was a big, big relief,” she said.

“I cannot express how grateful I am for our community and our family and our friends for coming together and helping us in this time of need.”

The Riggins family ran their generator after they lost power. Then lit candles in the evening. And it’s that combination that they believe led to a fire in their garage.