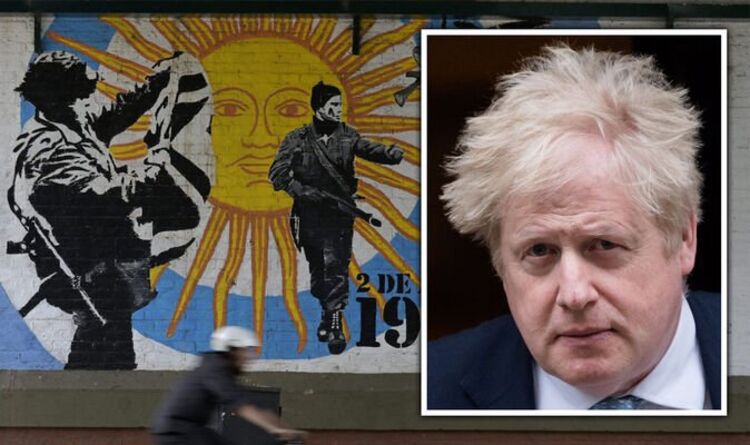 Saturday marks the 40th anniversary of the start of the Falklands War between the UK and Argentina. Now the Argentine government has accused Britain of “double standards” for its backing of Ukraine against Russia while not negotiating over the Falklands.

Mr Carmona also added that in both the Falklands and Ukraine, there had been an illegal military seizure of the sovereign territory of one state by another.

In response, A Foreign Office spokesperson said the Government has “no doubt about its sovereignty over the Falkland Islands”.

A source close to Foreign Secretary Liz Truss also told the outlet she viewed the comparison as “utterly spurious”.

They added: “She supports the right of countries to self-determination, which is exactly what the Ukrainians are fighting for, and exactly what the Falkland Islanders did when they voted overwhelmingly to remain a UK overseas territory.”

READ MORE: Saluting heroes of the Falklands War 40 years on

A total of 649 Argentine and 255 British servicemen died in the 74-day war in 1982, along with three of the Falklands’ civilian residents.

Despite resuming diplomatic relations in 1990, Buenos Aires and London have failed to settle their differences over the island.

Since then, Buenos Aires has demanded a resumption of talks over the sovereignty of the islands, citing a 1965 United Nations resolution calling on Argentina and the UK to settle the dispute as part of a global process “to end colonialism in all its forms”.

The UK has refused to return to the negotiating table, instead insisting on the 3,200 Falkland Islanders’ right to self-determination.

In a 2013 referendum, residents of the Falklands voted 99.8 percent to remain a British territory.

On Twitter, Boris Johnson marked the anniversary of the Falklands War, and reiterated the UK’s commitment to the islands.

He said: “On this day forty years ago the Argentine military junta invaded and occupied the Falkland Islands.

“This spring we will thank and remember all those who fought and died to liberate these islands and their people.

Lord Richard Luce, who resigned from the Foreign Office over the Falklands war 40 years ago, told the Independent information was available to suggest an invasion was coming from the Argentine junta, despite the official line remaining that the invasion was a surprise.

He said: “Hindsight shows that we were inadequately briefed on the range of indications of possible actions in the Falkland Islands.”

Lord Luce also added in retrospect: “There is one thing that we would have urged the Government to agree to, which would have been to send two submarines not at the late date that we did send them but much, much earlier as a precaution, and ready to surface and demonstrate to the Argentines that we were around and alert.

“But that’s with hindsight and I am not going to suggest that we would do anything differently with the information we knew at that time.”