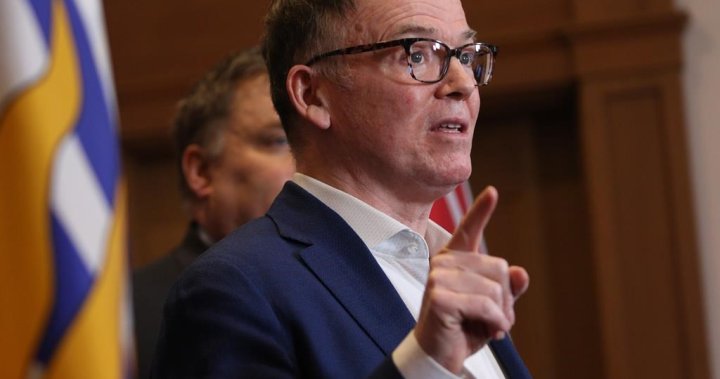 A by-election that could put British Columbia’s new Liberal leader Kevin Falcon back into the province’s legislature is a race over the past and the future, the candidates and political pundits say.

Voters in the swanky Vancouver-Quilchena drive, formerly owned by two former BC Liberal leaders, will elect a new member on April 30.

If two midterm elections loom up in BC, one will prove more exciting than the other

Falcon, 59, is a former government minister who was elected party leader in February after being away from BC politics for more than a decade.

He said he wanted to lead an opposition that would hold the New Democrat government accountable for shortcomings in affordability, housing and the drug overdose crisis.

She said her campaign was aimed at reminding voters of Falcon’s past as a minister in governments that scrapped social programs.

NDP cabinet ministers, including Treasury Secretary Selina Robinson, have campaigned with Ashe to tell voters that Falcon was in charge of cutting programs for women and families and that he should be a return to legislature denied.

The question for voters is whether they define Falcon as a politician who carries yesterday’s baggage, or as a new leader who can change things for the opposition in the 2024 provincial election after two consecutive defeats, said Prof. Stewart Prest, a Simon Fraser University political scientist.

“He has a very long track record and we know the NDP is not wasting time trying to do it,” said Prest, who said he sees Falcon as the frontrunner.

“This is a time to try to define him a little bit and to find the types of seizures that can work well,” he said in an interview.

Vancouver-Quilchena has been a safe haven for the BC Liberals. It was previously owned by former party leaders Andrew Wilkinson and Gordon Campbell.

Wilkinson, who stepped down as party leader after the October 2020 provincial election, was re-elected with 56 percent of the vote. He announced his retirement as an MLA last February, paving the way for Falcon to run in Vancouver-Quilchena.

The other three candidates in the by-election are Wendy Hayko of the BC Green Party; Dallas Brodie, Conservative; and Sandra Philosopher-Schipper, Libertarian.

Hayko, a disaster management expert and driving instructor, said she was concerned about youth housing and the government’s inaction on climate change.

Brodie, a lawyer and former presenter, said she lived at the equestrian center and was looking for a clothing boutique.

2:09
Kevin Falcon Settles Into New Job As BC Liberals Leader

Kevin Falcon Settles into New Job as Leader of the BC Liberals – February 7, 2022

Philosopher-Schipper, who ran as the 2020 Vancouver-Fairview Libertarian candidate, said she would advocate for affordable housing, health care and forestry initiatives.

Falcon said the NDP campaigned against personal attacks to divert attention from a failed record on housing affordability and the drug overdose crisis.

“The fact that they want to turn away from their own record is no surprise to me. I will continue to focus on their track record and their failure as a government to achieve positive results in any measure you choose to use.

Falcon, who served three terms in Surrey before deciding not to run in the 2013 elections, said he was leaving politics to spend more time with his young family. He also worked in the private sector at an investment and real estate development firm in Vancouver.

He held a number of portfolios after being first elected in 2001, including transportation, health, finance and was deputy prime minister. Falcon finished second in the 2011 leadership contest to Christy Clark, who was prime minister until the party lost power.

Vancouver-Quilchena is one of the most affluent constituencies in the county, but Falcon said his voters told him that unaffordability, especially for home prices and rent, was a major concern.

He said most people in the equestrian center want their children and grandchild to one day afford to live in the city.

Ashe, chair of the political science department at Douglas College, said she decided to run in the by-election at the urging of her students, as well as her husband, Mayor Stewart.

Falcon’s election as Liberal leader also convinced her to join, she said.

“I really love this city and I love this county, and when I heard that Kevin Falcon was chosen as the next leader by the BC Liberals, I was really horrified,” she said in an interview.

“I couldn’t believe they chose him. He was part of a government that has implemented such deep, devastating austerity measures that have hit our province and are still having this lingering effect.”

Ashe said she wanted to emphasize to voters that Falcon hadn’t changed.

“It’s up to them who they vote for,” she said. “I hope they vote for me, but I want them to look back over the years and remember who Kevin Falcon was and what he did for himself and (real estate) speculators.”

Former Liberal minister Mary Polak said Falcon’s presence would be felt by the NDP and his own party council should he win the by-election.

“He’ll be focused,” she said. “There will be tasks to complete. and he will expect them to be completed. He’s not slow when it comes to putting the goals they need to achieve before his caucus.”

The dynamics in the legislature between the BC Liberals and the NDP and Falcon and Prime Minister John Horgan would increase if Falcon returned, Polak said.

“If they want to fight Kevin Falcon successfully, they’re going to have to do better than try to rekindle the past,” she said. “They will have to look forward to what he has on his platform for the future.”

This report from The Canadian Press was first published on April 24, 2022.