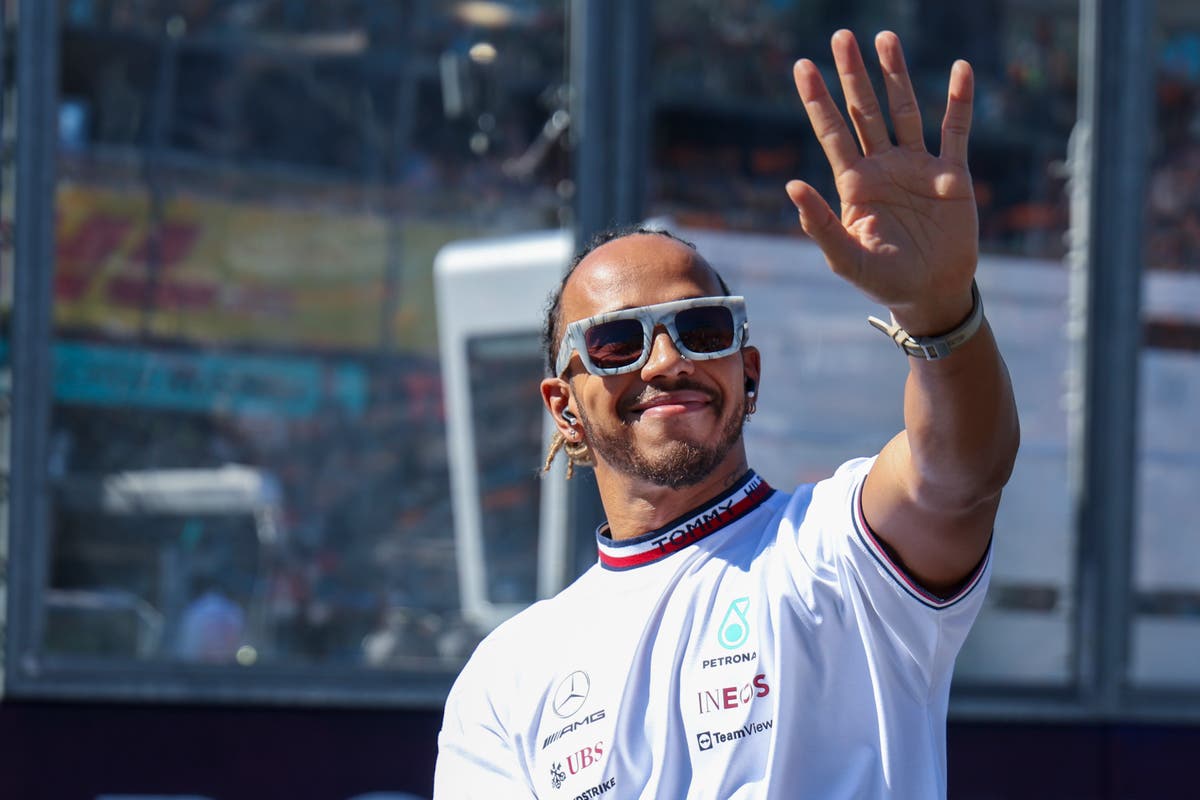 Follow all the latest news and reactions from the world of F1 as the teams prepare for the Emilia Romagna Grand Prix.

Several teams remain under pressure to address the issues that plagued them in the opening rounds, with free practice in Imola now just a day away. Red Bull saw reigning champion Max Verstappen fail to finish twice in the first three races of the season, although the potential they retain was clear when he won the Saudi Arabian Grand Prix on round two. On either side of that triumph, it was Ferrari’s Charles Leclerc who was the winner – putting him at the front of the drivers’ standings as a result, with Ferrari also at the top of the constructors’ table.

Meanwhile, Lewis Hamilton and Mercedes are expected to “challenge to win” again over the course of the season, although Toto Wolff has insisted it will take “time” for the team to resolve the issues they are having with porpoises and controlling the airflow under the new car. The seven-time champion Briton remains positive about his entry into the mix, but is following new teammate George Russell for the fourth race of the season in Italy this weekend.

Follow all the latest F1 news and reactions after an exciting start to the 2022 season.

Ferrari driver Charles Leclerc had his €300,000 watch stolen on Monday evening while posing for a group photo in Italy.

The 24-year-old Monegask is currently in Italy preparing for the Emilia Romagna Grand Prix this weekend, where he aims to take a third win in four races at the start of the 2022 Formula 1 season.

But Motorsport.com has reported that Leclerc was the victim of a theft during a night out in Tuscany earlier this week.

A group of individuals asked Leclerc for a photo and he was happy to help. But the F1 driver would later discover that his Richard Mille RM67 ‘Leclerc’ timepiece had been removed from his wrist while the photo was being taken. The perpetrator managed to flee the crime scene before Leclerc realized what had happened.

The seven-time world champion took a podium finish in the first race of the season in Bahrain, but struggled to find the pace in the car as he finished tenth in Saudi Arabia and fourth in Australia.

Mercedes team boss Toto Wolff has already confirmed that, with a lack of practice sessions in the Emilia Romagna Grand Prix this weekend due to the return of the sprint race, they are not preparing to add many important updates to the car.

But Gene believes the Silver Arrows will have big improvements for the next race in Barcelona and thinks they can then compete for victories.

We turn our attention to Imola, although this is the first sprint race of the season, it’s worth reminding that there are still more to look forward to.

The introduction of Formula 1 sprint races was a new innovation introduced at the start of the 2021 season.

A handful of races were given the green light so qualifying would take place on Friday instead of Saturday.

The sprint race would then replace qualifying on Saturday, before the race would take place on Sunday as usual.

Here’s everything you need to know about the 2022 sprint races – with the rules, number for the season and where they will be held.

Leclerc won two of the first three races of the season in Bahrain and Australia and also finished second to Max Verstappen in Saudi Arabia.

As a result of his impressive start to 2022, the Monegasque driver leads the championship with a whopping 34 points behind George Russell.

Meanwhile, Sainz is another four points behind Russell after two podium finishes and a DNF last time in Melbourne.

Speaking to F1 Insider, he said: “The pecking order at Ferrari has already been established. Carlos Sainz knows that too and is correspondingly angry.

“There was a time when someone [brother, Michael] was very successful and it was also the case that you knew relatively early on which driver you were concentrating on.”

However, Ferrari team boss Mattia Binotto has denied that there is any favoritism between the drivers.

“There have only been three races now,” he said when asked about the dynamics between Leclerc and Sainz.

“There are still 20 races to go, hopefully 19 or 20. So the championship is still very long. Our drivers are free to fight, and I’m really looking forward to and enjoying them competing for a good place and, if possible, first place.”

Lord Sebastian Coe is also backing Broughton’s bid with Crystal Palace co-owners Josh Harris and David Blitzer, who are also closely linked with entry, with the pair rumored to have a majority stake if successful.

Sky News report that both Hamilton and Williams will pledge an estimated £10 million to the cause, as they have both become “established investors” in various fields of sport in recent years.

The 24-year-old Dutchman suffered from reliability issues in Bahrain and Australia, with the only race he has managed to finish this season so far, his victory in the Saudi Arabian Grand Prix.

His inability to drive the car also means his team-mate Sergio Perez is currently ahead of him in the drivers’ standings and Marko believes Verstappen’s problems stem from the way he handles the car with his full throttle style.

During the 2021 season, there was a generational clash between seven-time world champion Lewis Hamilton and Red Bull’s Verstappen. The outcome of the season’s long battle ended in controversy and Marko now believes there is a changing of the guard in F1 with new drivers battling for pole.

“With Verstappen, Leclerc, Norris and Russell you now have four drivers who will make up F1 in the coming years,” the Austrian told F1insider.com.

Mazepin’s father, Dmitry, a Russian oligarch who is the majority shareholder of the chemical company Uralchem ​​and one of Haas’ main sponsors, was photographed with Vladimir Putin in January.

Haas removed the Uralkali branding from his car during pre-season testing in Barcelona as the Russian invasion of Ukraine accelerated and the team subsequently confirmed they had terminated the contract with Mazepin and the company.

Mazepin was candid about the situation, telling Motorsport.com: “Everyone has the right to speak or not to speak and the FIA, the highest governing body, has allowed me to compete as long as I am neutral.

“But I would say the biggest problem here is the return to the sport where teams are allowed to keep sponsorship money without fulfilling the contract. And ask for even more, even though they say they don’t want money from Russia. So I know. not sure, but after this the values ​​of the sport have to be evaluated for me.”

Ex-Formula 1 driver Mika Hakkinen believes Lewis Hamilton may want to leave Mercedes after a poor start to the 2022 season.

Hamilton has already finished on the podium once this season, finishing third in Bahrain, putting him in fifth place in the drivers’ standings. The British driver would aim for a record eighth title this season, but he is currently 43 points behind leader Charles Leclerc.

The same cannot be said of Hamilton’s team-mate George Russell who slipped into second after a podium finish at the Australian Grand Prix.

“George comes from a team with little or no success. He had some good results in qualifying, but not in races. All these achievements at Mercedes are new to him. Everything feels great,” Hakkinen said.

“For Lewis, this is a disaster. And with George leading the way, it’s even worse. I wonder how Lewis behaves in the team meetings – I bet he sulks. I can imagine sulking. There is a lot of complaining and whining.

“And now the natural thinking process of drivers begins. “Should I go elsewhere?”

“It’s a fact. He has been with Mercedes for years and won several championships. Now that things are not going well, he is thinking about switching teams.”

There are suggestions that Porsche and Audi, both companies that are part of the VW group, will join Formula 1, with reports indicating that Red Bull is looking to partner with Porsche and Audi that may join forces with McLaren in 2026.

However, Wolff currently thinks the plan is far from being agreed and questions remain about what VW’s entry might look like.

As quoted by Motorsport.comWolff said: “It’s great when the Volkswagen Group joins F1.

“Great brand, it increases the credibility of what we do. And they are racers. But as far as I understand, there is no firm commitment yet.

“They have been sitting around the table for the regulations, but [while] that commitment is not really confirmed, we can’t really know what the plans are. †

More about the potential for the Audi, Porsche and VW brands in F1: