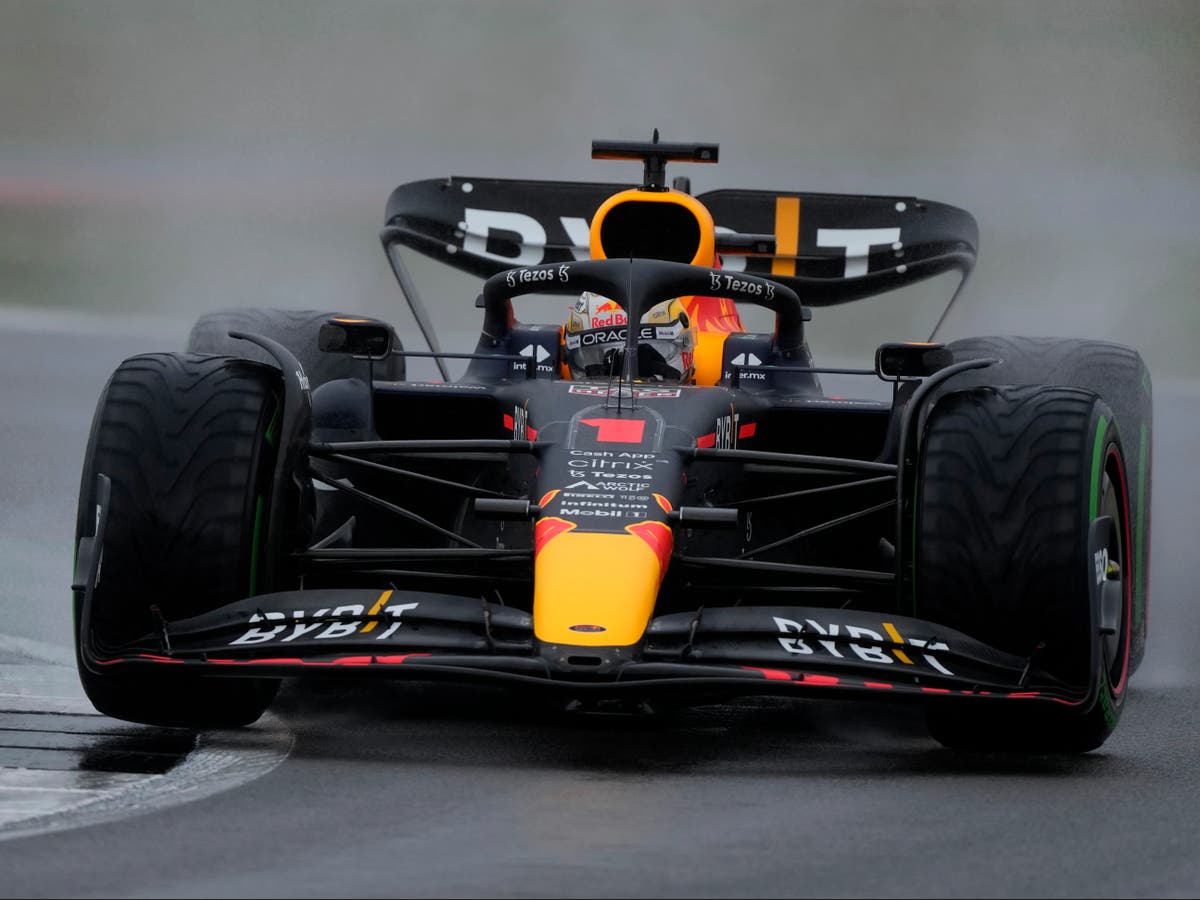 Follow live F1 coverage of qualifying for the British Grand Prix, where pole position is determined for Sunday’s race.

Lewis Hamilton hopes to perform at his home country of Silverstone and has been strengthened after his third place last time at the Canadian Grand Prix, only his second podium of what has been a hugely disappointing season so far. Max Verstappen claimed his sixth win of the season in Montreal, holding off a late attack by Carlos Sainz of Ferrari. The reigning world champion’s lead at the top of the drivers’ standings is now 46 points ahead of team-mate Sergio Perez.

The championship leader led a Red Bull one-two in the third and final practice for Perez. Charles Leclerc was third with the Mercedes pair George Russell and Hamilton fourth and fifth on the timesheets. Follow all the latest updates from Silverstone:

The rain is still heavy over Silverstone, but is blowing sideways with a strong wind.

Every car is now on the track, with times between 1st and 15th a staggering four seconds given the constantly changing track conditions…

Verstappen, Leclerc, Hamilton and Russell are the top four at the moment, but meanwhile the Alpines of Esteban Ocon and Fernando Alonso are still in the pits – do they know something we don’t?!

As a reminder, only the bottom five cars in Q1 will be eliminated in qualifying…

About half the cars waited at least a minute or two before 3:00am – and it’s Nicholas Latifi’s Williams leading the pack! Every car is on the intermediate belt.

It wouldn’t be the Great British Summer without a downpour!

It’s pretty fierce there right now, with fans in the stands getting soaked at this point!

Chances enough over the pit wall now, how long will the queue at the front of the pit lane be? Intermediaries to start with, before the track is full of wet…

The rain has definitely arrived!

Heavy rain expected around 2:55 am at Silverstone, five minutes before the start of Q1…

If the track is still completely dry, there could be a big stampede out of the pit lane at 3pm. Cue drama. Follow us to keep up with everything!

Only 15 minutes until qualifying!

We are getting reports that rain is expected for Q1 here at Silverstone. It is very cloudy upstairs. Time for some fun…

Two weeks ago, in the rain in Montreal, Fernando Alonso was the surprise front row name for Alpine – who could surprise this afternoon in potentially similar circumstances?

A beautiful moment before FP3!

Lewis Hamilton’s younger brother, seven years his junior, Nicholas is in the paddock this weekend, as is his father Anthony.

Nicholas has been at Lewis’ races throughout his Formula 1 career, including at Sao Paolo when he won his first world title in 2008…

Keanu Reeves is in the house!

The Matrix star is in the Aston Martin garage today on their home track!

As for the drivers on track for Aston… Sebastian Vettel was 12th fastest in practice three, with team-mate Lance Stroll back in 16th.

Another win for Jamie Chadwick in the W-Series!

The British 24-year-old makes four of four wins in the W-Series this year, 19 seconds ahead of the rest of the field!

She’s talking this week about a possible chance in Formula 2 or Formula 3 next season – and no wonder!

Emma Kimiläinen from Finland was second and British 19-year-old Abbi Pulling was third.

No problem again for Jamie Chadwick running away with it in the W Series!

The Briton is claiming her home race for the first time and it’s six wins in a row – what a start to her title defense.

Much closer behind her for the podium finishes.