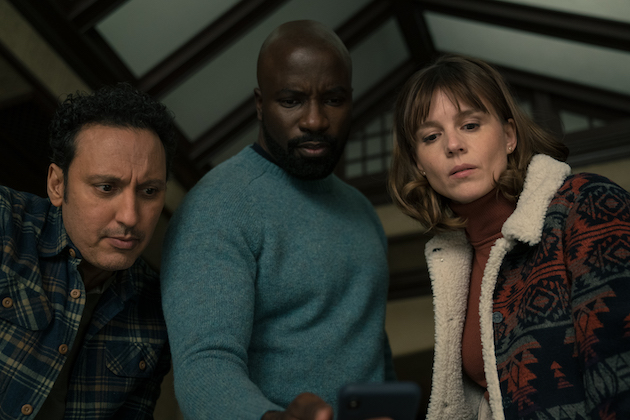 David, Kristen and Ben hit the road—and the diocese hopes Sister Andrea will do the same—in the Bad†

First, the wife of a truck driver, who believes she is possessed after driving on a supposedly haunted highway, enlists the services of the appraisers, which of course requires our Holy Trinity to drive the road in question. In his defense, it’s a stretch of I-95, which as a lifelong East Coaster I feel safe to say is absolutely cursed.

Back in the parish, a handful of priests are taking the first steps towards Sister Andrea’s retirement. They think she will go quietly. They don’t know her very well, do they? Read on for the highlights of ‘The Demon of the Road’.

SISTER ANDREA UNDER ATTACK † Let’s deal with Sister Andrea first. Father Katagas, from last season’s UFO episode, leads a group of priests who meet with the nun to tell her that reports of her mental and physical decline indicate that it is time for her to retire to a “retreat” in the state. All she has to do is sign a document agreeing to their decision…but she won’t. And when Leland shows up, she For real will not.

She freely admits that she sees demons, and that there is one in the room right now; we see the hellbeast with his hand on Leland’s shoulder, and I chuckle as Sister Andrea and the demon wave lovingly at each other as if they were on opposite sides of a garden party. The assembled fathers are not happy that Sister Andrea is making a fuss, but they agree that she is entitled to a hearing before a three-person priesthood council, and that she will undergo a psychological analysis performed by an outside party (sorry, Leland!).

So Sister Andrea has a session with Dr. Boggs, who is trying to find out if she suffers from incipient dementia. He wonders why she specifically asked him. “You saw a demon,” she says soberly. He stammers that he doesn’t know what he saw (but we do). She tells him that she sees demons “once an hour” and that she had her first religious vision when she was playing the piano at the age of 15. Saint Bernadette appeared with a vase of roses in her hand. “Then I gave myself to Christ,” she recalls. Later at home, Boggs sits at his piano, playing the same chord that evoked the vision for Teenage Andrea, but nothing happens.

When the Council of Heretical Practices next meets to discuss Sister Andrea’s case, David is there. He wonders why the sister is being accused of heresy, and we learn it’s because she says she saw a demon confer with the cardinal at a recent mass. Boggs also testifies; Sister Andrea lovingly “boos” him on the nose before he leaves. Father Katagas tells Sister Andrea that she needs a priest to defend her while the hearing continues. “Good thing I’m one,” David says with a smile.

I AM… KRISTEN FIERCE † Unrelated to one of the main conspiracies of the week: The man who beat up Kristen in the supermarket last season shows up at her door, answers her on his phone and demands an apology. “Do you know you have a blunt face?” one of her girls (accurately, if not diplomatically) yells at him before Kristen sends them upstairs. Kristen apologizes and leaves. “Why can boys do what they want and girls can’t?” Lexis asks her mother shortly afterwards. 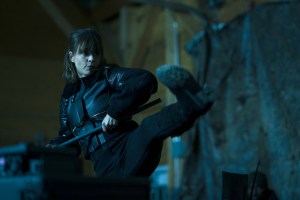 It’s a question that resonates with Kristen for the rest of the episode. After searching for the video that made her famous on the internet, she came across another video of a young woman talking about Beyoncé’s Sasha Fierce persona and how it can help the pop superstar instill confidence that she might not otherwise have. And that, plus a quick chat with Sheryl about how she taught Kristen from an early age not to take crap from guys, fuels Mrs. Bouchard when the contractor working on her house starts pulling some stuff the next day.

He demands a second payment before starting the second phase of the work. She reminds him that this was not the deal they made. He asks to speak to Andy, and if he doesn’t, he threatens to tear down the work his crew has already completed. “Okay,” she says calmly when the girls come home from school to see what’s happening. “Then I will help you.” She grabs a sledgehammer and starts flipping the frame toward the addition; within seconds, the crappy contractor collapses and says they’ll continue the work — and the payment schedule — as planned.

WHAT A LONG STRANGE JOURNEY IT HAS BEEN † Okay, on to the fears. A woman contacts David and says her husband, a truck driver, “just wasn’t the same” after returning from a recent job. He slept in his taxi, because one night when she tried to wake him up from some really bizarre behavior, he beat her, and now he’s afraid of hurting her.

The truck driver tells Kristen, David and Ben that he was on I-95 one night when something with red lights started following him. He thought it was a drone, although it didn’t move the way a drone moves. He sensed a presence but couldn’t see it clearly, then blacked out and approached Montreal. “I’ve driven 500 miles that I have no memory of,” he says, haunting. And when they investigate his installation, they find a sticker with a circuit diagram that looks suspiciously like one of their map’s demonic characters.

“IT’S A SHORT SLIDE TO HELL, BEN!” † The reviewers visit a restaurant where he stopped in his fugue state and learn from another truck driver that the road at exit 13A is considered haunted and that most commercial drivers avoid it. So Ben, David and Kristen go see for themselves. The road trip starts off sweetly – Ben plays “So Happy Together” by The Turtles – his mother’s favorite song – and all three of them sing along in the chorus. But a scream coming through the car’s stereo speakers cuts the fun short. Soon, the radio tunes itself to 666 AM, while sounds of an exorcism, hiss, and a speech about someone ‘taking our jobs’ are pumped loudly into the vehicle. And when David looks in the rear-view mirror, something with red lights (or is it eyes?) follows them. Just when you think things couldn’t get any creepier, a voice over the radio gleefully announces, “It’s a short slide to Hell, Ben!”, which we know will return at least once later this season.

Then the car’s electrical system starts to fail, the steering wheel freezes and David somehow steers the vehicle to the side of the road as it dies. Ben investigates, even as Kristen protests that that’s exactly how every horror movie begins. (Note: Katja Herber’s “Holy fk!” when he knocks on the window is absolute perfection.) Ben manages to pull the battery cable tight and off they go. He theorizes that someone is interfering with radio waves, so tamper with GPS signals and generally be a scourge. Later, with Karima, he wonders if a nearby shortwave transmitter could turn his phone into a transmitting unit, allowing that person to taunt him by name. 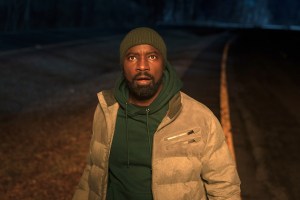 SAINTS PRESERVE US † A night or so later, David is awakened by the truck driver’s wife: Her husband and his truck are gone, and called her to say he thinks he hit something or someone, but he has no evidence of the incident. can find the way. David drives off alone and encounters the same radio interference as he passes exit 13A. Then he hits something that rolls over the windshield, and when he gets out to investigate, he finds a demon with glowing red eyes feasting on a deer’s carcass in the dark along the roadway.

Finally, the demon drops the deer and starts flying after David. But the chase ends abruptly when a glowing vision appears from a crack in the night sky: it’s an angel with a sword and a shield. The demon quickly leaves. And the vision disappears just as a truck honks and stops right in front of where David is standing in the middle of the road. The driver is the man David was looking for, and he asks, “Father, are you okay?”

Back at the parish, Sister Andrea thinks David’s meeting was a good thing, despite the fact that he was terrified. She points out that angels and saints are there to protect him from demons, and she assumes that he will resist the temptations of the flesh that he encounters in his daily life. (That quick flash of him and DemonKristen working on it says otherwise.) The nun says David’s resistance to sexytimes is why God helps him – is it any wonder he worries that everything he sees only but is summoned by his own mind?

GREAT JOB |Our trio drives back to the highway, while Ben follows radio signals. He realizes that someone is transmitting at 18.9 Hz, also known as the ‘ghost frequency’, which can create fear and optical illusions. The red eyes chase them again, but they are no match for Kristen, who is driving. She makes a U-turn in the middle of the road, following the noise of the transmission until they find a shed full of transmitting equipment and a truck with a giant antenna in the back…and the same demonic mark that was on the truck from the dude was earlier in the episode. There is also a gun in the front seat of the truck.

Kristen needs little encouragement to smash the equipment to pieces. And when the truck owner comes out and starts screaming, Ben realizes that the man was just hunting for power online. When everything is shattered, they leave. On the way out, they do not see Victor LeConte in a car with another man. “Wipe it down before printing,” Victor tells his co-worker in Italian.

Later, in David’s room, Victor shows up to let David know that he has eliminated a demonic family; the owner of the power-hunting truck “shot himself in the head after you left,” and since his successor couldn’t feast on his flesh to continue the house, that sigil can get the Emily Thorne Red Sharpie treatment. David accuses Victor of murdering the man, but Victor calmly says he didn’t dispose of the body until the succession could take place. Oh, and also? “We’ve been following you since you let that medical student cannibalize his cadaver” in the Season 2 finale. Cool cool.

Now it’s your turn. What did you think of the episode? Sound off in the comments!