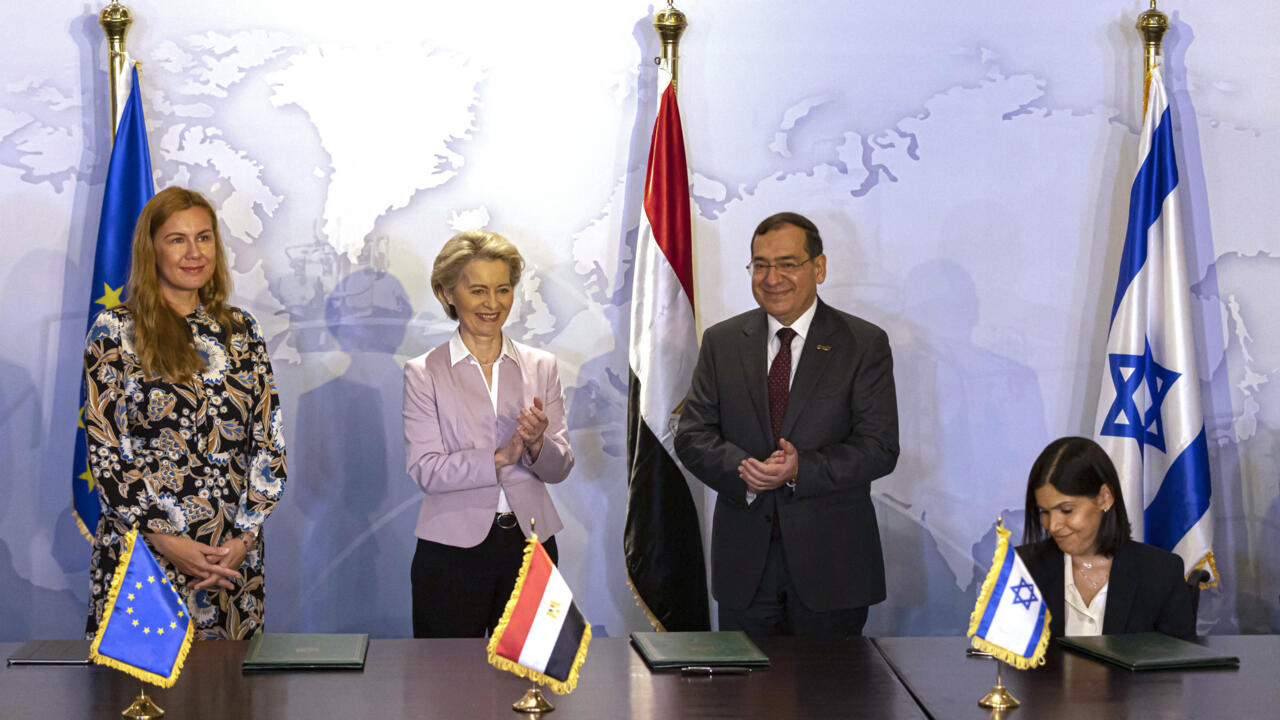 Israel and Egypt plan to boost gas exports to Europe under an agreement signed by the European Commission president during a visit to Cairo on Wednesday, as the bloc wants to rid itself of Russian gas.

Ursula von der Leyen also pledged 100 million euros ($104 million) in aid for food security in Egypt, which was reeling from grain shortages as a result of the war in Ukraine.

“Russia’s war against Ukraine has exposed our European dependence on Russian fossil fuels, and we want to get rid of this dependence,” von der Leyen said at a joint press conference with Egyptian President Abdel Fattah al-Sisi.

“We want to diversify into reliable suppliers and Egypt is a reliable partner.”

During a visit to Israel on Tuesday, she vowed to confront Russia about using fossil fuels to “blackmail” European countries.

The Memorandum of Understanding on gas exports between Egypt, Israel and the EU was signed at the East Mediterranean Gas Forum, the Egyptian Ministry of Petroleum said.

Under a landmark deal of $15 billion in 2020, Israel is already exporting gas from an offshore field to Egypt, where it will be liquefied and shipped to European countries.

But a significant increase in gas exports from Israel through Egypt would require major long-term investments in infrastructure.

Von der Leyen also said Egypt had solar and wind energy, “the energies of the future”, in abundance, and that the EU-Egypt joint exploration was in “our common interest”.

Von der Leyen promised “immediate aid of €100 million” to support food security in Egypt, the most populous country in the Arab world, which depends on Russia and Ukraine for more than 80 percent of its wheat.

“It’s very important that we stand here together, globally, to face this food security crisis, that we find solutions that are fair to everyone, that we look at the distribution of, for example, grain worldwide, and that we really put an emphasis on vulnerable countries,” said von der Leyen.

She also pledged three billion euros in “agricultural and food, water and sanitation programs for years to come here in the region”.

“The European Union is very interested in investing in local food production,” she said.

“It is so important to us that in the region, food production is improved and increased, and thus the dependence on other regions is reduced,” she said.

“Over time, this will ensure a stable supply of quality and affordable food for all…Egypt will be at the heart of this major shift.”

During her visit to Israel, von der Leyen had accused Moscow of deliberately cutting off gas supplies to European countries “in retaliation for our support for Ukraine”.

“This is a big step forward in energy supply to Europe, but also for Egypt to become a regional energy hub,” she said in Cairo.

Later Wednesday, von der Leyen traveled to Jordan where she met King Abdullah II, who described Jordan as “an essential partner for the EU” in comments on Twitter.

“You play a vital role in the stability and prosperity of the region,” she said.