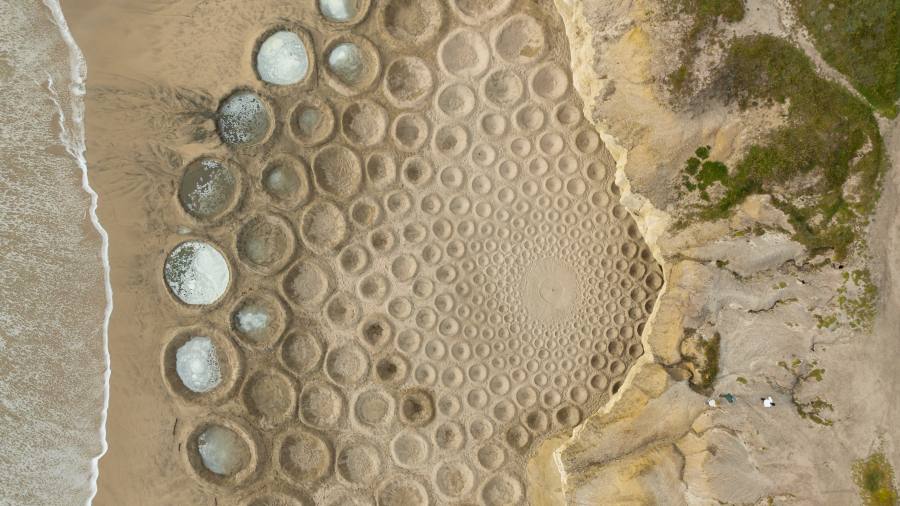 It’s early May. Jim Denevan — acclaimed country artist, roving chef and founder of the cult nightclub known as Outstanding in the Field — stands on one of his favorite California beaches, creating a piece of art especially for the FT† Located next to the cliffs on San Gregorio State Beach in San Mateo County, the installation took three days of painstaking work. It consists of hundreds of sculpted dunes of various sizes, each with a notch at the top. Now, in the wee hours of the last day, Denevan is putting the finishing touches on making a candle in each mound to create a vista of small makeshift lanterns. Only things don’t go according to plan. The sea does not behave.

“We went out at 3:30am when the wind would be light enough [for the candles]’, he reports. “While most of the composition was out of tidal range, very high waves – higher than predicted – had swept away some of the outer rings in the middle of the night. Fortunately, the high waves created their own pattern that added to the composition.” In aerial photos taken at sunrise by Denevan’s son Brighton, the scene resembles a distant galaxy of the Milky Way.

Denevan has always had an affinity with water. He grew up in San Jose, California, on the trail of the Guadalupe River. He learned to surf at the age of nine. He started surfing competitively as a teenager at his family’s beach house in Santa Cruz. His skills earned him the nickname “King of Pleasure Point”. In his early twenties, he was surfing three times a day: “Life was about how long I could lie on the beach in the afternoon between catching waves.”

Now 60, he says a day on the water is less about chasing the biggest and best waves for him than enjoying the “deep peace” that comes with waiting. Less surfer-like than rancher, he’s six feet tall and can usually be found wearing a straw hat, plaid shirt and cowboy boots — a “postmodern Marlboro Man,” as one magazine described him. He has not lost his respect for the water. “Every day you are immersed,” he says, “you feel the energy and power of the ocean, crushing you. Even the smaller waves. That’s what a surfer is. The softness of seeing your friends, feeding those conversations. Then get crushed by the waves, conquer it, do it again and try not to wipe out.”

For some, the life of a champion surfer would have been enough. But when 24-year-old Denevan was scouted as a model and ended up in Milan, he welcomed the chance to broaden his horizons: “I didn’t necessarily want to be a model,” he admits, “but go to Italy. , I knew that I would see something other than these damn surfers.” The fashion world didn’t suit him: “People congratulated me for being photogenic, like I had achieved something,” he says. But he enjoyed the food and drink (“I’ve had the best coffee in the world”) and coming home he started working at the farm-to-table pioneer Trattoria Primizia in Santa Cruz, where he later became a chef.

Life took a bitter turn. In the mid-1990s, Denevan’s mother — a professor of mathematics at San José State — became ill with Alzheimer’s disease. Three of his brothers had already been diagnosed with schizophrenia. The emotional stress of it all took its toll. Denevan quit his job, went to the beach and started drawing in the sand with a stick. He never stopped. At first he sketched whimsical figures like a fish 4.5 meters long. Later they became geometric shapes on a monumental scale: interlocking circles and cascading spirals largely freehand over the course of hours. The process can be intense and physical, as well as “very soothing and meditative,” he says.

Since then, Denevan has become a globally recognized country artist. His work has been documented in MoMA PS1 and the Vancouver Biennale. One of his largest installations is an 18-square-mile spiral of circles he etched onto the frozen surface of Lake Baikal in Russia in 2010. One of his most recent is a work entitled angel of restconsisting of 364 sand pyramids in concentric circles in the middle of which singer Alicia Keys was photographed dancing during Desert X AlUla in Saudi Arabia this year.

San Gregorio State Beach, the scene of his composition for the FT, has not only been the site of many previous artworks, but also several dinners that Denevan has hosted with Outstanding in the Field (OITF). Billed as “a restaurant without walls,” OITF hosts banquets at ingredient-sourcing locations, be it in fields, orchards, vineyards, or along the coast. The aim is to celebrate the farmers, fishermen and winegrowers whose products are consumed and to reconnect guests to the origin of their food. Since its launch in 1999, OITF has hosted dinner parties in 19 countries around the world, from Mount Fuji to Byron Bay. This year it is heading to Africa for the first time with events in Ghana, Morocco and South Africa. As we speak, Denevan is gearing up for a 230-seat dinner at long tables along the pier at Huntington Beach, a famous surf spot near Los Angeles. “Crazy we’re getting permission to take over these unusual spaces,” he texts with a photo of OITF’s 1953 red-and-white tour bus parked at the end.

In addition to the farmers and guest chefs taking part – big names such as David Kinch, Marcus Samuelsson, Dan Barber and Anne Quatrano – Denevan brings its own quirky vibe to events. “He’s got a surfer dude, inner calm thing that’s totally real,” says chef Jason Weiner who works with him regularly. ‘I’ve never seen him confused. He has confidence and charisma and brings you with him through the sheer power of his personality.” He has also been known to break into improvised songs at dinner parties and throw people in the air and catch them for fun. “Anyone who weighs less than 200 pounds,” notes Denevan. “Men and women, I do not discriminate. I’m looking at them, judge [their weight] and toss them like a sack of potatoes. Anyone under 150 pounds I can get pretty high. He adds: “I’m a bit shy and sensitive. I overcompensate.”

The first dinner he cooked on San Gregorio in 2005 was for 100 people in a giant sea cave. “It seemed impossible and unusual enough to draw attention to the event,” he recalls. He had no official permits and in the weeks leading up to the dinner, he recalls, “the cave filled with sand and I had to go out at 2 am with a small bulldozer.” [to dig it out]† He plans to take the spot again in October for another dinner (this time with permits). He also returns to the UK for the first time in ten years for two dinners at Lower Town Farm in Halwill near the Devon/Cornwall border (on 10 July) and Sitopia Farm in South East London (on 16 July), where Sarit Packer and Itamar Srulovich of Honey & Co will be guest chefs. 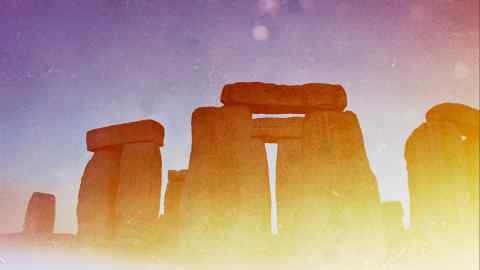 “People come to our dinners and aren’t quite sure what’s going to happen,” Denevan says. “They may come away disappointed or find it a transcendent experience.” He takes pride in the adventurousness of the events. At a diner near Seattle, he even located the kitchen where the tides come in, sending the cooks knee-deep in the seawater. The weather also plays a role: “We’ve had events with 45mph winds in the desert. And one on a cliff in Big Sur where the fog lifted to cover the table and disappeared a few courses later; the unveiling was one of the most powerful events ever. I like to create situations in which people are presented with an environment that is only really complete when they participate.”

Ahead of the Halwill dinner, Denevan plans to put out an open call for diners to create a piece of art with him on a Cornish beach. He outlines the area in the sand and the guests color it in with rakes, as it were. Photos of the final composition will be made available, but the temporary nature and certain destruction by the Atlantic waves are key to the work. “I create a temporary place with every work of art,” he says. “The place didn’t exist in the morning and it doesn’t exist after the tides come in.” As Denevan puts it, “Water transforms everywhere.” Therein lies its strength.